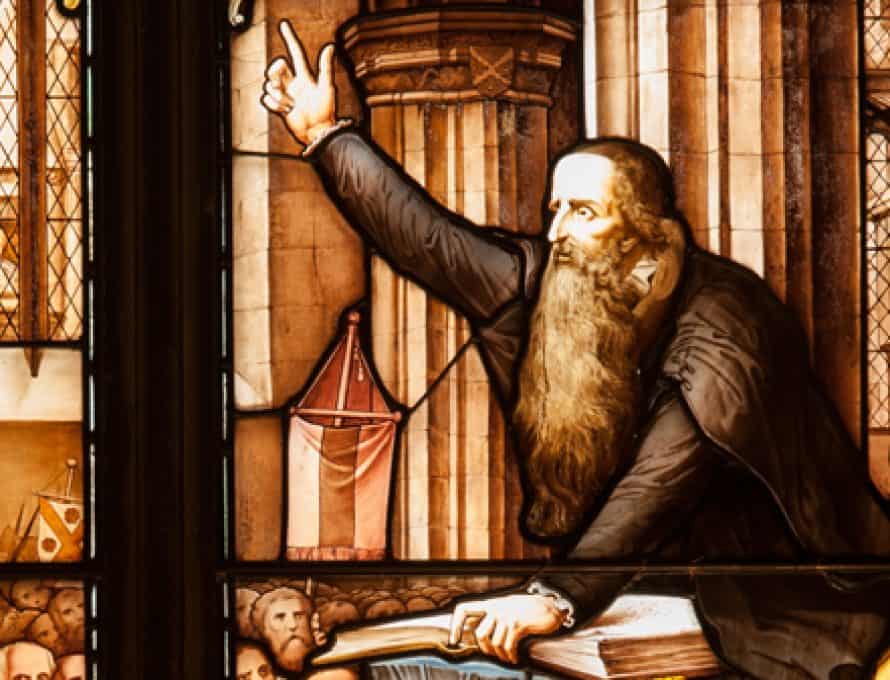 John Knox, a 16th-century father of the Presbyterian church in Scotland, is depicted in this Victorian stained glass window in St. Giles, Edinburgh.

EDITOR’S NOTE: This is the third in a series of articles on the various denominations in North America, written by Robert W. Caldwell III, who serves as professor of church history at Southwestern Baptist Theological Seminary.

In the previous article we examined Anglicanism (and its American counterpart, Episcopalianism) and observed that the denomination’s uniqueness stemmed from the way its founders sought to unite the best features of Protestantism and Roman Catholicism. They sought, in other words, a middle way between “Geneva” (Protestantism) and “Rome” (Roman Catholicism). In this article we turn our attention to a group that sought to identify itself solely with Geneva’s “Reformed” Protestant church: Presbyterianism.

Technically, the term “Presbyterianism” refers to a unique ecclesiastical authority structure that is based neither on regional bishops nor on the congregational structure which Baptists are familiar with. The term presbyter derives from the New Testament Greek word for “elder.” Presbyterians argue that an individual church should not be led by an individual priest or solo pastor, but by a plurality of elders. Given the abuses they sometimes discerned in the episcopal system of Catholics and Anglicans, Presbyterians sought to counter the excessive concentrations of power that resided in a bishop or a priest by spreading out spiritual authority to a group of individuals. As biblical support for this conclusion, they often point to the Apostle Paul’s practice of appointing elders (plural) in the local congregations he shepherded. Elders have spiritual oversight and authority in their congregations, and they are often comprised of both ordained clergy (usually the full-time pastor of the congregation) and laymen.

This commitment to spreading spiritual authority across groups of individuals is reproduced at higher levels in Presbyterian polity. Beyond the local congregation, elders from nearby congregations in a given region will regularly convene in gatherings called “presbyteries.” Presbyteries gather to address issues that arise in their local churches and have significant authority over those congregations due to the fact that they are the only Presbyterian body which can ordain ministers. Above local presbyteries are several other ecclesiastical levels which take on different names depending upon the nation the presbyterian denomination is in: for example, “synods” are groupings of local presbyteries in a larger geographic region, and above these is a “general assembly” which is like a super-presbytery over all the synods of an entire nation. These bodies, always existing as a plurality of church leaders, operate as appeals courts for problematic issues that arise at the congregational level. They also handle issues related to doctrine and heresy.

In the United States, denominations in this tradition with the word “Presbyterian” in their name—like the “Presbyterian Church of America” (PCA)—trace their roots back to the British Isles (England, Scotland, and Northern Ireland). Many denominations with the word “Reformed” in their name also follow Presbyterian polity, but they have roots in continental Europe, like the “Reformed Church in America,” the “Christian Reformed Church” (both Dutch origins) and the “German Reformed Church.” Theologically, Reformed and Presbyterian churches have looked fondly on the doctrines associated with “Calvinism,” which to them means not only the Calvinist doctrines related to salvation (predestination, limited atonement, etc.) but also their unique mix of views related to other issues, such as their understanding of the purity of biblical worship (which historically sought to avoid religious art in the sanctuary and the use of instruments in worship), and their understanding of the ordinances (they practice infant baptism and historically have affirmed the “spiritual presence” view of the Lord’s Supper).

These positions can be found in their confessions. English-speaking Presbyterians generally adhere to the Westminster Confession of Faith (1646), while Continental European Reformed churches will adhere to the Heidelberg Confession (1563), the Belgic Confession (1566), and the Canons of Dordt (1619). Though Presbyterians highly regard their confessional heritage, they have an even higher regard for the authority of Scripture. In the late 1800s, the American Presbyterians B. B. Warfield and A. A. Hodge became well-known for their rich defense of the doctrine of biblical inerrancy, and they published intricate, academic studies defending Scripture from the rise of theological liberalism.

A Brief History of Presbyterian Churches

Presbyterianism finds its origins in the Swiss Reformation of the 1500s, where leaders like John Calvin sought to restructure the church around the four-fold office he found in Scripture: elder, pastor, teacher, and deacon. John Knox, who studied with Calvin in Geneva, took these insights and developed them further in Scotland, where he helped establish Presbyterianism there in the 1560s.  Presbyterianism got a significant boost in England during the English Civil War (1640s) when the Puritan victors, many of whom were Presbyterian, succeeded in refashioning the Church of England after a Presbyterian model. Part of this work entailed crafting the Westminster Confession of Faith as their new confession. While this Presbyterian experiment in the English Church was short-lived (it only lasted a decade), the Westminster Confession became the central confession adhered to by most English-speaking Presbyterians after the sixteenth century.

Presbyterianism moved to America in the late 1600s as a steady stream of English, Scottish, and Scots-Irish immigrants came to the colonies, bringing with them their faith. In the 1730s and 40s Presbyterians played a prominent role in the First Great Awakening. Major revivalists—such as Gilbert Tennent, Jonathan Dickinson, and Samuel Davies—were all Presbyterian. Theodore Frelinghuysen, whose revivals in central New Jersey are often identified as the beginning of the First Great Awakening, was from the Dutch Reformed Church.

In the 1800s, Presbyterians were known for their solid defense of orthodox Protestantism, their high regard for Scripture, and their commitment to Calvinist theology. Princeton Theological Seminary, founded in 1812, was a bastion of Presbyterian conservatism for over a century. Some of American Protestantism’s most well-known theologians, such as Charles Hodge and B. B. Warfield, taught there. By 1900 as liberal views of Scripture were on the rise, great controversies arose among the Presbyterians. In time the “modernist” liberals gained control of major Presbyterian denominations and its institutions (including Princeton Seminary). This effected an exodus of conservative Presbyterians who left the mainline to form newer institutions committed to biblical inerrancy, such as Westminster Theological Seminary (founded in 1929), the Orthodox Presbyterian Church (founded in 1936), and other groupings of conservative Presbyterians that eventually merged in the 1970s and 80s to form the Presbyterian Church in America (PCA).

Today there are numerous types of Presbyterians scattered across a number of denominations in America:

Currently, the total number of Presbyterian and Reformed church members in the United States hovers around four million. Yet Presbyterianism is not merely an American phenomenon. It has spread beyond Europe and North America through their missionary endeavors. Today there are sizable Presbyterian movements in India, Africa, South America, and especially South Korea, which has close to ten million Presbyterians.