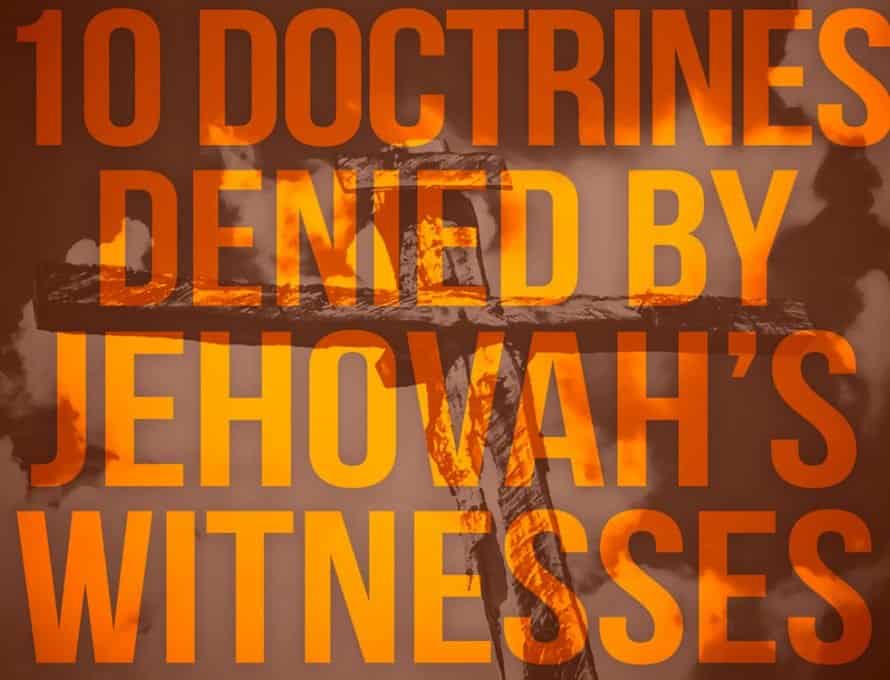 This is the second in a three-part series on Jehovah’s Witnesses. Read part one: Who are Jehovah’s Witnesses. The Baptist Faith and Message, available as a free download from sbc.net, features a more complete treatment of Christian doctrines and includes multiple Scripture references.

Our Jehovah’s Witness friends deny at least 10 key biblical doctrines. This is due in part to their reliance on The New World Translation of the Holy Scriptures, which we discuss in the next column.

1. The Trinity. The Watch Tower says Jesus is a created being and the “holy spirit” is an impersonal force. “The obvious conclusion is, therefore, that Satan is the originator of the trinity doctrine” (Let God Be True).

The Bible tells us there is one true and living God who exists as three distinct, co-equal, co-eternal persons: Father, Son, and Holy Spirit.

2. The deity of Christ. The Watch Tower teaches that Jesus was created “just as angels were spirit beings created by God…. The fact is that Jesus is not God and never claimed to be” (Should You Believe in the Trinity?).

The Bible, however, records at least seven ways Jesus reveals His deity: He calls Himself the “I AM;” claims equality with the Father; receives worship; forgives sins; teaches with divine authority; affirms the apostles’ statements of His deity; and fulfills the attributes unique to God.

3. The personhood and deity of the Holy Spirit. Jehovah’s Witnesses liken the “holy spirit” to electricity – an impersonal, powerful, unseen force under the sovereign control of Jehovah.

The Bible, however, clearly establishes the deity of the Holy Spirit as the third person of the triune Godhead. The Bible uses the words “Holy Spirit” and “God” interchangeably. Jesus calls the Spirit “another Counselor,” with the Greek word allos meaning “another of the same kind.” As Jesus is a divine person who comforts His followers, so is the Spirit.

4. Christ’s sacrificial and substitutionary death on the cross. The Watch Tower says that Jesus died as a “ransom sacrifice” to buy back what Adam lost: the right to perfect life on earth. Further, Jesus died on an upright stake or post. The cross, JWs believe, is a pagan symbol embraced later by wayward Christianity.

The Bible, however, is clear that Jesus died on a cross, or stauros in Greek. While this word may refer to an upright stake, its more common meaning – and its clear contextual application in Scripture – is a wooden structure similar to the Greek letter tau (T), the plus sign (+) or, occasionally, two diagonal beams (X).

More important, Jesus’ death on the cross paid our sin debt and purchased our salvation so that everlasting life is received by grace through faith in Jesus.

5. Christ’s bodily resurrection. The Watch Tower teaches that Jesus was “raised from the grave, not a human creature, but a spirit” (Let God Be True).

The Bible, in contrast, reveals that Jesus predicted His bodily resurrection, and then fulfilled it on the third day after His crucifixion.

6. Christ’s physical and visible return. Jehovah’s Witnesses believe Jesus began his “invisible presence” on earth in 1914. “Since no earthly men have ever seen the Father … neither will they see the glorified Son” (Let God Be True).

The Bible, however, tells us Jesus is in heaven today, seated at the Father’s right hand. He will return one day physically, visibly, and personally.

7. Salvation by grace through faith. JWs believe salvation is earned through a combination of faith plus good works – specifically, taking in knowledge of Jehovah and Jesus; obeying God’s laws; belonging to and serving with God’s true organization (The Watch Tower); and being loyal to God’s organization.

The Bible tells us that Christ’s death at Calvary paid our sin debt and purchased our salvation so that everlasting life is received by grace through faith in Jesus.

8. Consciousness of the soul after death. The Watch Tower teaches “soul sleep” – that is, the soul rests in the grave with the body until the resurrection. JWs deny that people possess immortal souls.

The Bible tells us there is conscious existence in the intermediate state between physical death and resurrection. Samuel, Moses, Elijah, the rich man and Lazarus all are depicted as alive and conscious following their departures from earth.

9. Everlasting punishment for unbelievers in hell. Jehovah’s Witnesses teach the annihilation of the wicked in hell.

However, the Bible says hell is a place of everlasting conscious existence, where unbelievers are forever separated from God.

10. Heaven as the destination for all believers. The Watch Tower teaches two classes of redeemed people: the “little flock” of 144,000 in heaven, and the “other sheep” who, if worthy, abide forever on a restored earth.

The Bible teaches that all believers have God’s promise of a home in heaven. We go there instantly upon physical death. After our resurrection, we return with Christ to earth, which He purges of sin and makes new.

Next: What is The New World Translation?​

Today, the U.S. Supreme Court will consider a case that pro-life Americans hope will finally bring an end to a permissive, nationwide abortion regime that has lasted nearly a half-century.

It seems that Gene Lancaster has a thought that as long as there is a soul to be reached for Jesus Christ, there is still a ministry need.