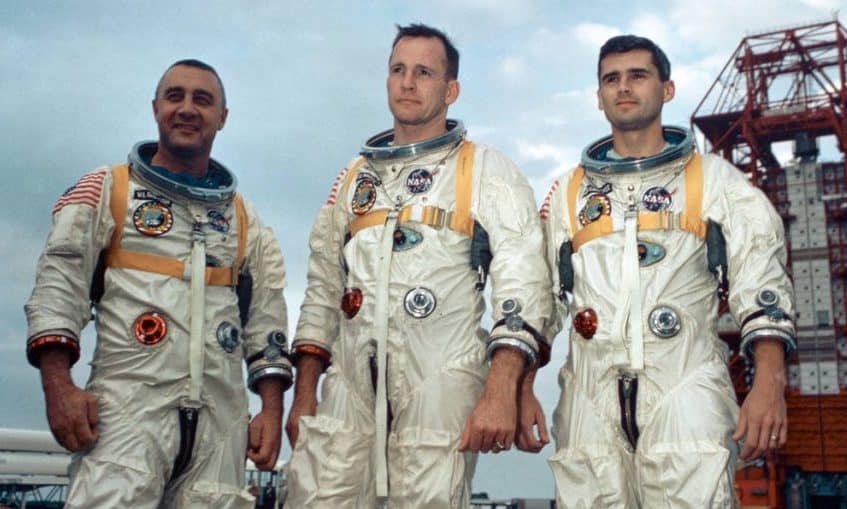 Astronauts, from the left, Gus Grissom, Ed White II and Roger Chaffee stand near Cape Kennedy's Launch Complex 34 during training for Apollo 1 in January 1967. On Jan. 27, 1967, the three astronauts were preparing for what was to be the first manned Apollo flight. The astronauts were sitting atop the launch pad for a pre-launch test when a fire broke out in their Apollo capsule. The investigation into the fatal accident led to major design and engineering changes, making the Apollo spacecraft safer for the coming journeys to the moon. NASA photo

EDITOR’S NOTE: This updated story ran in its original form in the Jan. 17, 2015 issue of The Pathway.

ST. LOUIS – Before Neil Armstrong, Buzz Aldrin and Michael Collins could blast off for their lunar landing and secure their places in history books, the tough lessons and sacrifice of Apollo 1 two years earlier paved the extraterrestrial road. Judy Boen was there.

Boen and her husband Jim were newlyweds when they moved from St. Louis to Florida and he began working for NASA as an aerospace engineer and she in the typing pool.

Perhaps because she was not a picture-perfect secretary, she meshed well with the Gemini (the program immediately preceding Apollo) astronauts, who did not take well to what was considered typical office life. 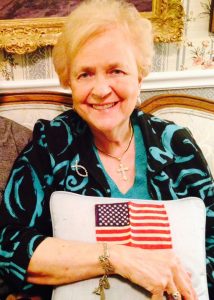 “God put me there because of my attitude,” Boen said. “They were fighter pilots and came with that spirit; they weren’t executives. That’s why I fit in. They didn’t know to tell me to sit down and take shorthand. I’ve got a blank piece of NASA stationery signed by [Roger] Chaffee where he said ‘here, you type it up.’ I told him to sign a couple pieces in case I messed up, but I did it one try. I always wanted to find the teacher that told my mom I shouldn’t be a secretary and tell her where I ended up.”

Each set of astronauts would come to Florida for a six-week run-up to launch, and then they would rotate the next crew in. Boen was on a first-name basis with some of the most famous men in U.S. history. Gemini 7’s crew, Frank Borman and Jim Lovell even volunteered to take a charm from Judy’s bracelet with them on their 14-day orbit. Thomas Stafford and Eugene Cernan took another charm up with them on Gemini 9 and after Gemini 11, Pete Conrad and Dick Gordon presented her with an American flag stowed away on their capsule. (Lovell would eventually become even more famous as the astronaut who radioed “Houston, we have a problem” when Apollo 13 suffered a near-fatal explosion on its ill-fated mission to the moon in 1970.)

That rapport gave her the chance to share her faith with men like Roger Chaffee, the pilot of Apollo 1, scheduled for launch Feb. 21, 1967. In the middle of January, Boen was at the office late one night typing. Chaffee walked in and was concerned that she was working so late on their behalf. On the contrary, she was typing up materials for her husband who was chairman of evangelism at their church.

“‘Oh, what church to you go to?’ he asked. I told him and that was the closest we ever got to talking about spiritual things,” Boen said. “I was 24 and even though they liked me, I was a little intimidated.”

That was on Wednesday. Friday, she went home after work, made dinner and turned on the TV. Chaffee, Gus Grissom and Ed White were dead.