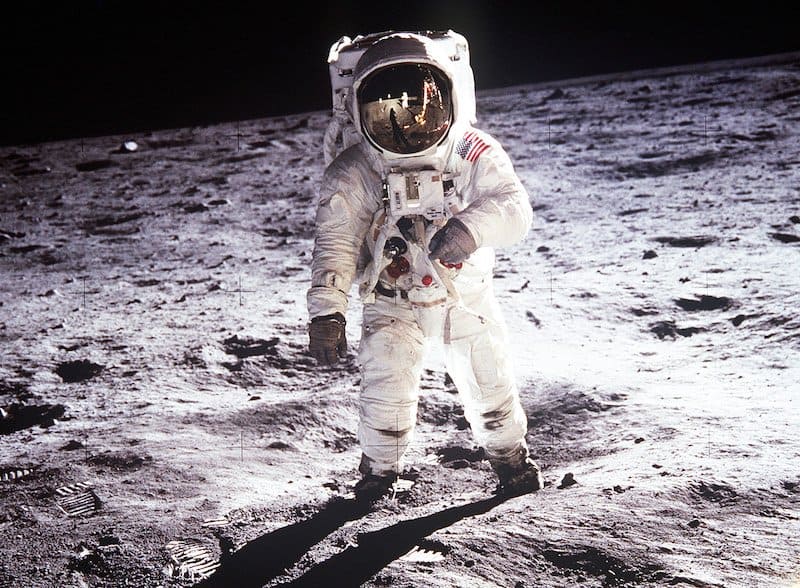 LUNAR SURFACE – Buzz Aldrin walks on the surface of the moon as photographed by Neal Armstrong, who is reflected in Aldrin’s visor. There are no still photos of Armstrong walking on the moon. NASA photo

LUNAR SURFACE – Apollo 11’s lunar lander touched down on July 20, 1969. It was a Sunday. Mission protocol called for an hours-long wait before opening their hatch to the surface, so Buzz Aldrin opened his tiny pouch of personal items and retrieved a thimbleful of wine and some bread.

The astronaut, an elder at Webster Presbyterian Church in Houston, received special permission from NASA to take bread and wine with him to space and give himself communion.

So before he and Neal Armstrong took their giant leaps for mankind, Aldrin paused to “do this in remembrance of me.” It was the first food and drink ever consumed on the moon. 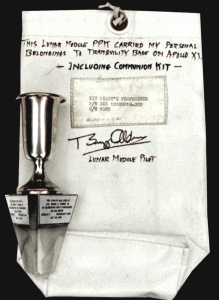 He planned the moment “as an expression of gratitude and hope,” Aldrin later wrote in his book, Magnificent Desolation. “I could think of no better way to acknowledge the enormity of the Apollo 11 experience than by giving thanks to God.”

“I poured the wine into the chalice our church had given me. In the one-sixth gravity of the moon the wine curled slowly and gracefully up the side of the cup,” he wrote.

Then, Aldrin read some Scripture and ate. Armstrong looked on quietly but did not participate. On a three-by-five card, Aldrin had written the words of Jesus: “I am the vine, you are the branches. Whoever remains in me, and I in him, will bear much fruit; for you can do nothing without me.”

“I silently read the Bible passage as I partook of the wafer and the wine, and offered a private prayer for the task at hand and the opportunity I had been given,” he wrote.

Aldrin had argued with NASA that the service ought to be broadcast to the entire world, but the bigwigs back in Houston disagreed. Atheist activist Madalyn Murray O’Hair had previously sued NASA after Apollo 8 astronauts read the first chapter of Genesis during a broadcast made on Christmas Day six months prior as they became the first humans to orbit the moon.

Though the case was ultimately dismissed (judges rejected O’Hair’s legal arguments, saying the astronauts had the religious freedom to read Scripture), NASA told him to go ahead and have communion, but “keep your comments more general.”

So as he opened his personal packet but before he partook, Aldrin transmitted back to Earth as generic a message as his conscience would allow: “I would like to request a few moments of silence. I would like to invite each person listening in, wherever and whomever he may be, to contemplate for a moment the events of the past few hours and to give thanks in his own individual way.”

For Aldrin, that meant there was no doubt he would be giving thanks to the Creator of the cosmos.