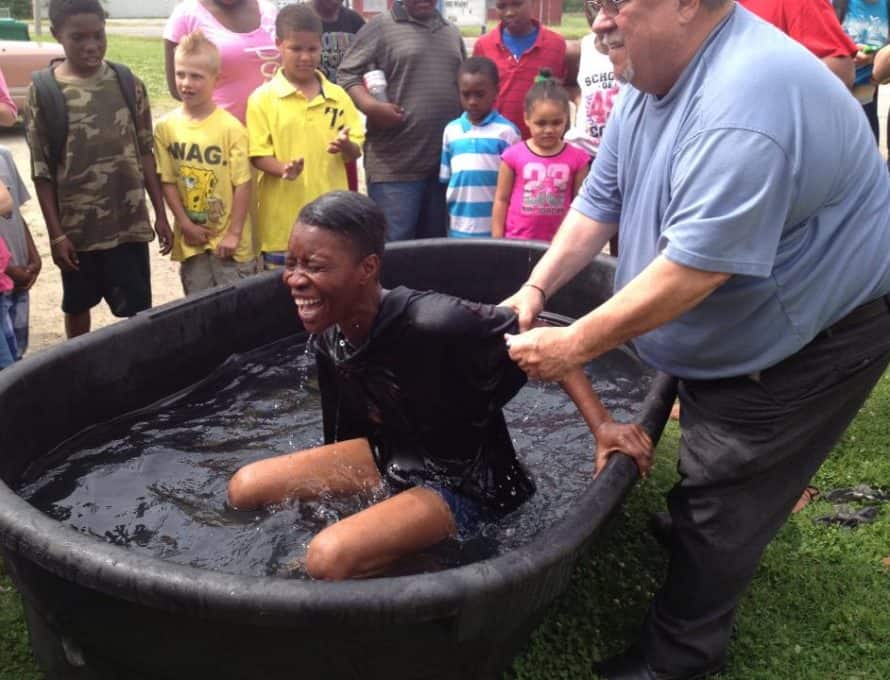 CHARLESTON – A young lady joyfully rises out of the water after celebrating her baptism during a service at Shining Light here this spring. Photo courtesy of Shining Light

CHARLESTON – In the spiritual darkness of southeast Missouri, Shining Light Ministries in Charleston offers a ray of hope.

“God led us to start this in a small town in the middle of sin, crime, violence, hunger, and extreme poverty, Children are raising themselves. Shining Light believes Jesus is the answer to all these issues,” said Rev. Dean Wallace, director.

“This is a multi-generational problem. We believe if this chain will ever be broken, it will start with the children.”

The ministry began as a church plant.

“We launched in the first weekend of June, 2003 with a block party followed with worship and Sunday dinner. On Friday (before the party), we learned my wife Mary had cancer and needed to see the surgeon the following Monday. Mary had stage four breast cancer that spread to the lymph nodes, the liver and spine. She was given six months to live, a year with chemotherapy. Satan hit us with all he had at the start.”

In the next six months, most of the core group was lost to death, illness or out-of-state moves. A store was bought rather than a vacant church and became an outreach center with children’s ministry.

“I believe we’re the most successful church plant failure in the history of Missouri Baptists,” Wallace said.

“We had 30 people every week who had never gone to church. Children didn’t know how to behave. I was accustomed to breaking up fist fights while preaching and then continue my message. One regular fighter later got saved,” Wallace said.

Ministry began with a food pantry, regular hot meals – with no kitchen, Christmas, school supply giveaways, and worship. That building fell into disrepair, and they were given a building and 6.4 acres for which he and Mary prayed. It was uninhabitable, save an office – due to “dogs, cats, rats, snakes, and derelicts. But the property was adjacent to one of the housing projects in out town. We felt that’s where God wanted us.”

“Now we have a 12,000 square foot building with classrooms, an auditorium, a library/computer lab, a kitchen, a dining are, a food pantry, a clothes closet and a youth room and we need more room. An outdoor playground and basketball court draw children and youth,” he said.

“We’ve not gone a year without multiple salvations, but cross culture, race, and a lack of parental support keep baptisms low. Still, we’ve had five to 30 baptisms every year I’ve been here. A number of children grew up to do the unthinkable – go to college. Some come back from college and hang out in Shining Light.”

Sunday worship is still followed by a hot meal, cooked by Mary, whose cancer was miraculously healed. A food ministry reaches about 365 people. So far this year, over 400,000 pounds of fresh produce has been distributed. The clothes closet is open monthly and on an emergency need basis. The football team and cheerleaders are fed. Over 1,000 area children got donated school supplies. The North America Mission Board helps with a Christmas backpack program. Summer hot lunches are served Mondays through Fridays for 25-125 children.

“We’re a part-time ministry. I wish we could do more.”

Shining Light also has summer camps – horse camp, Bible clubs, sports camps, recreation camps “and just about any other camp with the opportunity to share Jesus, and to give them a place off the streets.

During a school suppies giveaway, a girl asked about a rubber bracelet. She was given the bracelet which symbolized the plan of salvation. She, her stepsister, and mother accepted Jesus.

Ricky Frazier, a Charleston basketball standout who opted for worldly ways, searched out Wallace, and received Christ during a food pantry distribution.

“God is transforming lives. We introduce people to a loving God. Their world doesn’t look like ours. They (with transformed hearts) live among the drugs, sex and language that would curl a sailor’s hair, and they go out and live their faith.”

“We invite people to come and do mission work for a day, a week, or a month. You go home with a blessing you never expected. We are supported by prayers and donations. We get no federal support. God just seems to supply. So far he has met all our needs.”