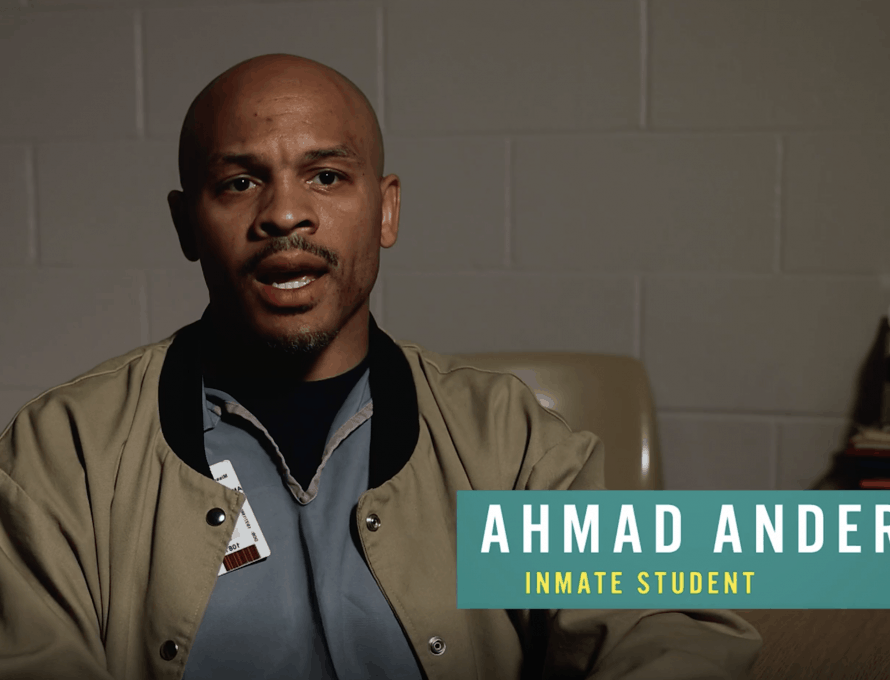 Ahmad Anderson, a student in Hannibal-LaGrange University's Freedom on the Inside program at the Jefferson City Correctional Center, shares his testimony in a video produced by the Missouri Baptist Convention. See the video below.

HLGU’s Freedom on the Inside takes gospel hope behind bars

JEFFERSON CITY – When Ahmad Anderson, an inmate in the Jefferson City Correctional Center (JCCC), first enrolled in Hannibal-LaGrange University’s Freedom on the Inside program, he wanted nothing to do with Christianity.

“When I got here, he was very anti-Christianity,” said Rodrick Sweet, director of Freedom on the Inside.

But, in time, Anderson came to what he called a “turning point” in his life.

“And he began to ask questions,” Sweet said, “and I began to try to provide him with answers. And then his fellow classmates, who are Christians, peppered him with questions, forced him to answer his objections.”

As a result, he prayed to receive Christ several weeks ago, while sitting in Sweet’s office.

In a video produced by the Missouri Baptist Convention (available at www.mobaptist.org/mmo/videos), Anderson described the value of HLGU’s program. “If

you want to make change out on the streets, you have to start in here,” he said.

Indeed, Freedom on the Inside promises to transform lives in Missouri state prisons. Started in partnership with the Missouri Department of Corrections and the Global Prison Seminaries Foundation, the HLGU program offers students the chance to earn a Bachelor of Science degree in Christian Studies.

In turn, graduates from the program become field ministers, helping to share the love and hope of Christ throughout the state’s prison system.

Freedom on the Inside is only one of numerous ministries that Missouri Baptists support through their giving to the Missouri Missions Offering (MMO). Their generosity speaks volumes to prisoners in the program.

“It’s an example of God’s love, that people are supporting us, and we are thankful for this opportunity every single day,” Austin Campbell, a JCCC inmate and student in the program, said.

For many students, the program offers more than an education. It also offers hope amid life’s difficulties. Last October, Freedom on the Inside student Scott Peoples was diagnosed with COVID-19. Then, shortly after coming out of quarantine, he was diagnosed with cancer.

“I wasn’t expecting this,” he said, struggling to hold back his tears. “On February 4, the doctor said, ‘I’ll give you a 50/50 shot at life.’ The people that God has put in my life and my path right now are helping me through that: Rodrick Sweet, the brothers (in the program) I’m struggling with, trying to get the right answers. Because of what I have in my life now, I’m probably at the most peace I’ve ever felt.”

HLGU’s Freedom on the Inside is modelled after other Southern Baptist programs that have shown great success in transforming both individuals’ lives and the prison’s culture.

Nearly 30 years ago, the Louisiana State Penitentiary in Angola, La., was not only one of the largest maximum-security prisons in the nation, but it was also extremely violent. In 1990, inmates attacked each other 1,107 times, and they attacked staff members 280 times.

But all this began to change in 1995 when the New Orleans Baptist Theological Seminary set up a seminary degree program to train long-term inmates for gospel ministry to other prisoners. Hundreds of inmates have now graduated from this program, and thousands of them now attend church services regularly behind prison bars. Lives have been transformed, and violence has fallen drastically.

“The Bible college was the game-changer,” Burl Cain, the prison’s former warden who invited NOBTS to begin the degree program, told The New York Times in 2014. “It changed the culture of the prison.”

Inspired by the impact of the NOBTS program, Southwestern Baptist Theological Seminary in Fort Worth, Texas, also launched a degree program in 2011 at Darrington, a maximum-security prison in Rosharon, southwest of Houston. Sweet served at the Darrington program before becoming HLGU’s Freedom on the Inside director.

“God is at work inside prisons across the country,” Sweet said. “But specifically, I see God at work here.”

To learn more about Freedom on the Inside, contact Sweet at Rodrick.sweet@hlg.edu or visit HLGU’s website, www.hlg.edu. To watch the MBC’s video about the program and hear the testimony of students in the program, visit https://mobaptist.org/mmo/videos/.

To learn about other MMO-supported ministries, see page 3 and see the MMO insert in this edition of The Pathway.