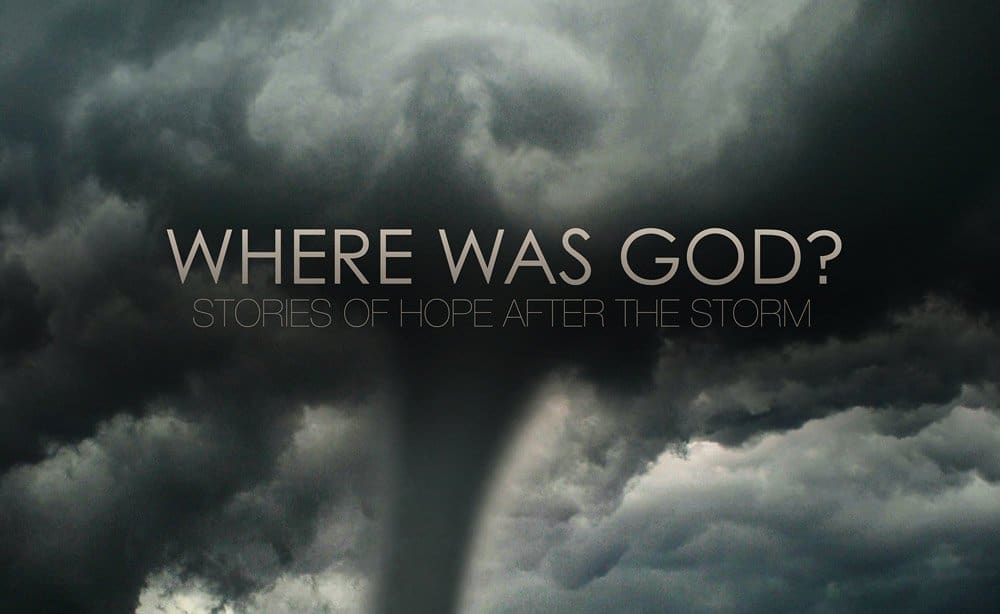 JOPLIN – Where is God in the midst of a storm? Specifically, where was God in the 2011 EF5 tornado that killed 158 people and caused more than a billion dollars in damage in Joplin? What about the 2013 EF5 tornado that killed 24 and inured nearly 400 in Moore, Okla. last year? A new documentary, “Where Was God? Stories of Hope After the Storm,” attempts to answer that question.

During an interview with The Pathway, Oklahoma film maker Chris Forbes said the short answer is that He was everywhere.

“We didn’t want to shrink back from the questions people were asking,” he said. “Some people used that question cynically. Even Christ asked, ‘My God, why have You forsaken Me?’ Asking where God is or why things happen is something that people do. I don’t have an answer for why these things happened, but I wanted to show you the where and how people experience God through the storm.”

Forbes came up with the idea for the movie last June after seeing the way the faith community in Oklahoma – including Southern Baptist Disaster Relief volunteers – responded in the days after the tornado.

“I was passing through Moore in the days after the storm and the town doubled in population,” he said. “There were so many volunteers. From working with Oklahoma Baptist leaders, I knew there had to be more story than was being told in the general news media. They covered the crisis of the tornado, but what is the struggle like three, six or nine months after a storm, spiritually speaking? Does it drive people away from God or toward God?”

With Where Was God?, Forbes set out to tell the stories of survivors, volunteers and first responders as they described the devastating and miraculous events that surrounded the Moore tornado.

Forbes said he initially met some resistance to the idea of the documentary.

“People were hesitant because they didn’t want it to be another media spectacle,” he said. “But when we told them how we were trying to tell a story of hope and of the things God had done they became very open to it. There were so many stories that came out, it became a chore to narrow them down.”

One of those stories is of an Oklahoma Baptist disaster relief chaplain, Bunny Yakzaman, whose story was featured in the pages of The Pathway last summer under the headline: “‘I’ll crawl with you,’ Baptist tells grieving mother.” Coincidentally, Bunny and her husband have moved to Missouri while he attends Midwestern Baptist Theological Seminary in Kansas City, and is now among the ranks of Missouri’s disaster relief chaplains.

Another story in the documentary is about Kayla Carmona, a 15-year-old survivor of the 2011 Joplin tornado. She lost her father in that storm, a moment that she retells in the film’s trailer. She and her mother traveled to Moore to minister to those touched by the storm and even moved to Moore to stay close to those they connected with.

“The film is emotional,” Forbes said. “It’s hard to not be emotional in a moment of tragedy. But it’s not gratuitous about the pain and the overall feeling is one of triumph and confidence in God.”

The documentary will premiere at the Warren Theatre in Moore, May 16, the location of one of the major triage locations in the hours after the tornado. The trailer for Where Was God? as well as information about hosting a screening is at www.wherewasgod.com.