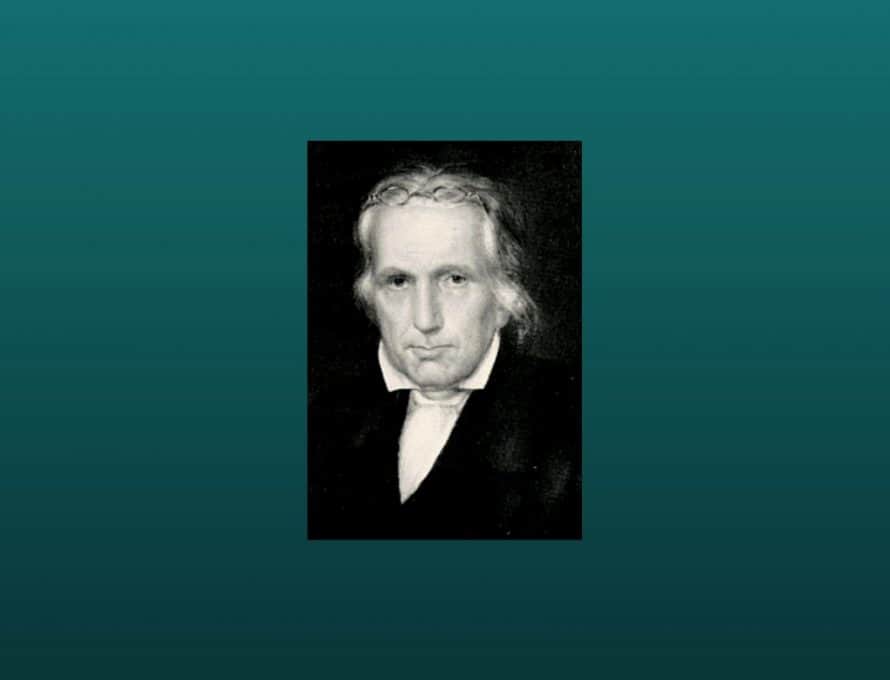 Thomas Campbell (shown here), along with his son Alexander, were instrumental in the formation of the Restoration Movement.

EDITOR’S NOTE: This is the sixth in a series of articles on the various denominations in North America, written by Robert W. Caldwell III, who serves as professor of church history at Southwestern Baptist Theological Seminary.

We begin the this part of our series on “American Denominations and Other Religious Movements” by examining those groups which originated in the United States. The first movement we will examine was an attempt to be an anti-denomination, that is, they were trying not to form another denomination but simply to exist as New Testament Christians. Because of this, they tried to avoid using a denominational name and merely called themselves “Christians” or “Disciples,” names we see the New Testament giving to the followers of Jesus. Consequently, there is considerable confusion over what to call this group since they used several names over the course of their history. Historians call the origins of this broad movement the “Restoration Movement” because they sought to restore the patterns and practices of the New Testament church.

What is the Restoration Movement?

The Restoration movement is a Christian movement that originated in the early years of America’s history (1790-1825). The group followed two ideals. First, they embraced a mere biblicism. Their devotion to Scripture alone and to the ideal of the New Testament church led them to reject what they considered to be the trappings of human-centered denominations. To them, true biblical religion rejects human documents (like creeds and confessions) as well as all human institutions (like denominations). Second, they sought unity among Christians. They believed that by rejecting creeds, confessions, and denominationalism that Christians of many types would come together and experience a new age of Christian unity and harmony. Their zealous commitment to these ideals led their leaders to embrace the following characteristics:

In time the combination of their anti-denominational attitude and their unique liturgy ironically generated the founding another denomination. Today we know them by various names: the “Churches of Christ,” the “Disciples of Christ,” and/or the “Christian Church.”

The opening decades of the American Republic (1790-1820) witnessed a proliferation of new religious movements in America, many of which were related to Christianity in varying degrees. A general mood of anti-traditionalism and its rejection of the Old World spilled over into the religious preferences of many Americans. Several Christian leaders saw the absence of an official state church as a golden opportunity to restore the Christian church to its original, primitive ways based upon a plain reading of Scripture. The push to “restore” the true church was born.

The Restoration Movement had multiple origins as leaders from numerous denominations came to embrace the vision of restoration. In the 1790s John O’Kelley, a Methodist leader, formed a group of “Christians” who rejected ties to British Methodism. In New England two former Baptists, Elias Smith and Abner Jones, founded a connection of churches based upon restorationist ideals. And in the early 1800s former Presbyterians Barton Stone in Kentucky and Alexander Campbell in Pennsylvania founded separate movements along similar lines. Stone called his group the “Christians,” while Campbell’s group was called the “Disciples,” names designed to reflect their radical reliance upon the Scriptures alone. It was these latter two groups which grew significantly throughout the 1810s and 20s. Both groups independently developed similar features, including the following:

While Campbell’s group operated under the umbrella of the Redstone Baptist Association in the 1820s, it was clear that they were not ordinary Baptists. By the early 1830s Campbell’s “Disciples” left the Baptists and merged with Stone’s “Christians” to form a group that took on various names: the “Christian Church” or the “Disciples of Christ” depending on who you asked. I will refer to them as “Disciples” for the sake of simplicity.

The middle third of the nineteenth century (1830s-1860s) saw the Disciples movement grow significantly, a testimony to the fact that a sizeable number of American churchgoers resonated with their views. By the 1860s there were just as many Disciples congregations in the United States are there were Congregational churches and Anglican churches.

As the movement developed and grew, disagreements with other denominations as well as internal disagreements brought about change. Significant disputes arose between Baptists and the Disciples. In fact, their conflict in the nineteenth century was a significant factor in the formation of Landmark Baptists who shared several views with the Disciples (like the autonomy of the local church, and baptism by immersion) but sharply disagreed with them over their theology of baptism “for the remission of sins.”

Disagreements also arose among themselves over various issues. Some Disciples desired to adopt instrumental worship for their services. Others sought to form a missionary sending agency that would aid in the spread of the gospel worldwide. Later, other leaders of the movement began adopting the tenets of theological liberalism. These disputes (and others) led to a three-fold division in the movement that has remained to this day.

Today there are three main groups which are descendants of the original Stone-Campbell Restoration Movement. Their names overlap, which can create confusion among those on the outside. First, there are the “Churches of Christ” (non-instrumental) which resisted the trend to embrace instrumental worship in the nineteenth century. Generally, these are the conservative restorationists. They claim to have 1.1 million members in the United States and a total of two million worldwide. Second, there is the independent “Christian Church and Churches of Christ” which embraced instrumental worship but otherwise strongly resembles the non-instrumental Churches of Christ. They number about one million members in the United States in roughly 6,000 congregations. Third, there is the “Christian Church (Disciples of Christ)” which represents the more liberal wing of the restoration movement. They boast about 400,000 members in 3600 congregations.