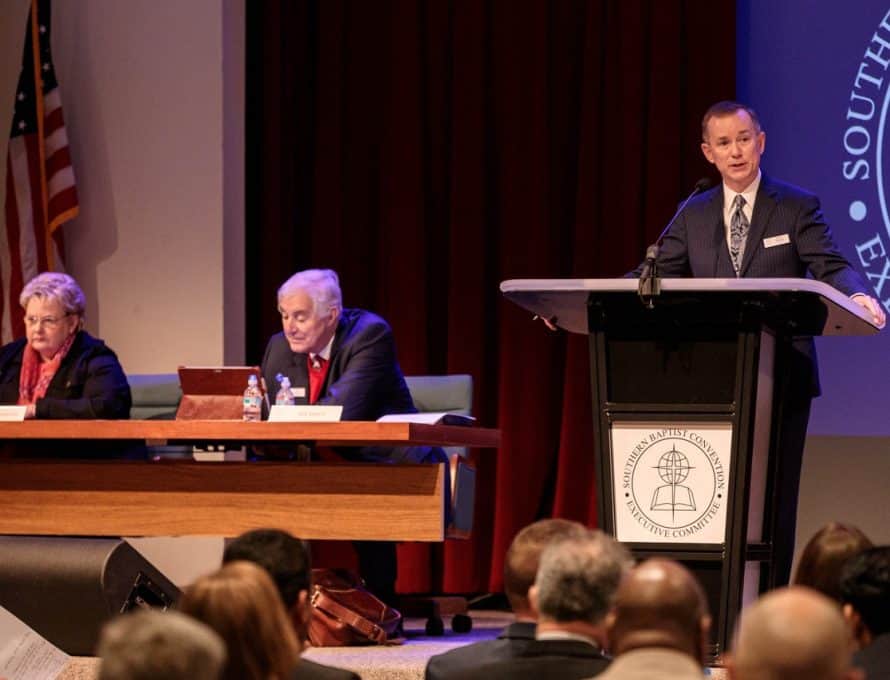 EDITOR’S NOTE: Will Hall is executive editor of the Louisiana Baptist Message

NASHVILLE, Tenn. (LBM) — The attorney for Mike Stone filed a defamation lawsuit against Russell Moore, Oct. 19, with the U.S. District Court for the Middle District of Tennessee in Nashville, claiming libel (publication of false statements), false light, invasion of privacy (misleading and offensive portrayal) and intentional infliction of emotional distress as the causes of action.

The lawsuit seeks $750,000 from Moore and requests a jury trial.

Stone is pastor of Emmanuel Baptist Church, Blackshear, Georgia, a member and former chairman of the Southern Baptist Convention Executive Committee, and an unsuccessful 2021 candidate for president of the SBC.

Moore is the former president of the SBC’s Ethics & Religious Liberty Commission, who now serves as “public theologian and director of the public theology project” for Christianity Today, a religious media outlet, according to Moore’s page on the CT website.

The 62 pages on file include 26 pages relating to the complaint, as well as 36 pages containing two letters penned by Moore that are at the heart of the lawsuit as well as a copy of the SBC Constitution.

The filing alleges that Moore “began a malicious, intentional, and egregious campaign” to harm Stone within one week of the creation of the third task force formed Feb. 24, 2020, by the SBC Executive Committee – one which Stone chaired – that investigated Moore “to assess whether the actions of the ERLC (then led by the Defendant) and its leadership were negatively affecting the fiscal well-being of the SBC.”

The case filing states that Moore wrote the two letters and “strategically concealed them from general distribution within the ERLC and the SBC but then subsequently surreptitiously released, or ‘leaked,’ to the news media” knowing that Moore’s claims would receive wide news coverage.

Moore’s first letter and the timing of its release were described as “retaliation” for Stone’s leadership of the investigation by the task force, and specifically intended to “defame … and discredit” Stone’s “campaign for the presidency of the SBC.”

The second letter, dated May 31, 2021 and released to the public June 2, 2021, was addressed to J.D. Greear, pastor of The Summit in Raleigh-Durham, and the immediate past president of the SBC who presided over the 2021 SBC Annual Meeting, also “contained numerous false allegations” against Stone, the court documents allege.

The lawsuit identified several statements from Moore’s two letters and offered information to refute the accusations Moore made against Stone, including:

— Moore alleged Stone and the SBC EC “exonerated churches, in a spur-of-the-moment meeting, from serious charges of sexual abuse cover-up” and that Stone “drove the motion, but also saw to it that he would be a member of the ‘task force.’” Stone’s attorney argued that the SBC EC is restricted to only make recommendations regarding whether a church is “‘in friendly cooperation’ with the SBC – a sanction that only results in a church’s ability to send messengers to register and vote at the SBC Annual Meeting.”

— Moore accused the SBC of fostering a “culture where countless children have been torn to shreds, where women have been raped” and that he was forced to be “quiet about molestation, for the sake of some title.” The lawsuit counters that Moore delayed acting on the allegation, along with six members of the ELRC’s executive board, for 15 months – not because they were being forced into silence but because of an “orchestrated” attempt to “negatively impact” the 2021 SBC presidential election.

— Moore alleged that Stone initiated the task force to impact the ERLC’s purported work “to address the abuse,” and that Stone drove the formation of the task force and named himself as chair. Stone’s lawyer said, however, that the actual motion to form the task force was “initiated by senior employees of the Executive Committee, including Dr. Ed Upton, Mr. Jonathan Howe, and Mr. Bill Townes. These senior leaders initiated the discussion and drafted the motion that would eventually create the task force under the leadership of Dr. Ronnie Floyd, President and CEO of the SBCEC.”

The lawsuit described Moore’s actions as “malicious” and successful in causing Stone to narrowly lose “his bid to become the new president of the SBC.” Moore also is accused of causing “a decreased trust of and confidence in” Stone by the “religious community.” Additionally, Moore’s alleged defamation of Stone’s character is cited as potentially harming attendance and donations at Stone’s church as well as Stone’s ability to earn outside income in terms of speaking honorariums.

The lawsuit comes after the SBC Executive Committee voted 44-31, Oct. 5, to waive attorney-client privilege in accordance with a motion that was adopted during the last session of the 2021 SBC Annual Meeting –