HANNIBAL – Hannibal-LaGrange University is a Christian liberal arts university which adheres to the historic, Baptist tradition and continues in the heritage of the founders of the university.

It was started as LaGrange Male and Female Seminary, later to become LaGrange College. The institution was founded in 1858 in LaGrange, Missouri, by the Wyaconda Baptist Association.  It was begun out of concern for the “advancement of the cause of religion and sound morals” and as a “convenient point at which young men whom God may call to the work of the Gospel ministry, may be educated.” 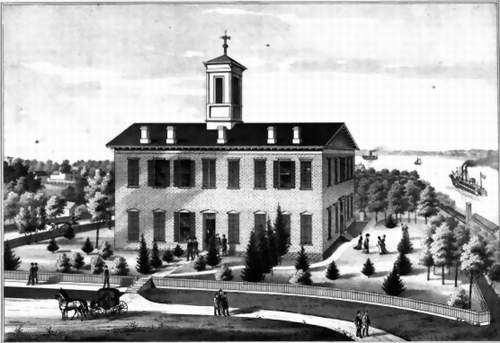 The college was overseen by the Wyaconda Baptist Association until 1919, when its charter was amended to enlist additional associations and churches in its support and control.

A 1928 revision of the charter required trustees to be approved by the Missouri Baptist General Association. In 1928, the citizens of Hannibal pledged $232,000 for the establishment of a Baptist college at Hannibal. The gift made it possible to acquire an adequate campus and to erect new buildings. And so LaGrange College was merged with the new institution, moved to Hannibal and renamed Hannibal-LaGrange College.

College boosters felt it had the double advantage of an old college with a rich history and a new location with new buildings, new equipment, and new life.

The united college with two campuses eventually did not work well and there was a proposal made by the president, Dr. Frank Kellogg, which offered the option close the Hannibal campus. Local Baptists in northeast Missouri reacted and began an effort to “Save the College” as their slogan read. In 1973, the Missouri Baptist Convention separated the two facilities and reestablished Hannibal-LaGrange College.

Up to this point HLG had been a two-year liberal arts junior college. But in 1975, under the leadership of Dr. Gerald Martin, Hannibal-LaGrange College was accredited as a four-year institution, and in 1981, the Missouri Baptist Convention gave its approval for the college to assume senior college status adding bachelor’s degrees and majors.

In 1989, the college’s main building burned to the ground, destroying the administrative offices, most faculty offices, classrooms, chapel/theatre, gymnasium, and cafeteria. Classes and offices had to be quickly relocated.  Students took meals in area restaurants for a time until a dining commons could be constructed. Over a period of years, each of these facilities was replaced with larger structures.

The college president at that time, Dr. Paul Brown, said of that fire:

“We were so saddened and so heartbroken. But at the same time, my fondest memory is of how wonderfully people responded after that fire. People all over the area came through with such wonderful offers to help. I really believe that that fire caused people to have a fresh awareness of what a tremendously valuable asset Hannibal-LaGrange College was and is to the community….”

In 2007, the college received approval for offering its first graduate degree: Master of Science in Education. In 2010, the Missouri Baptist Convention voted to change the institution’s name to Hannibal-LaGrange University.

In 2013, tornado-force straight-line winds damaged the T. M. Mathews Science Building beyond repair. Temporary classrooms and laboratories were constructed on campus for use until the Carroll Science Center was completed in the Fall 2015.

Dr. Anthony Allen is the current president of the university.  For more information about Hannibal-La Grange University check their website at: www.hlg.edu.