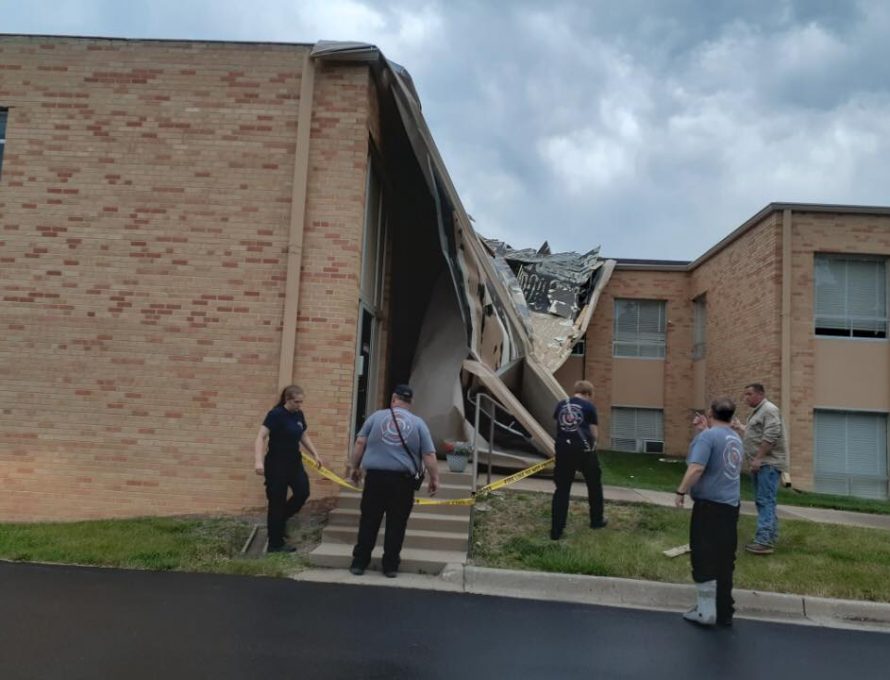 HARRISONVILLE—The educational building of First Baptist Church here sustained major roof damage from a windstorm on Friday, June 11. Michael Firkins, student pastor at the church, told The Pathway it was either a “microburst” or straight line winds that peeled the roof membrane off and knocked over one of two cooling towers. The building had a lot of water in the top floor classrooms. It is used for Sunday school, Wednesday evening activities and a Christian school. (Photo courtesy of FBC Harrisonville)

The roof of the educational building was peeled off, according to Michael Firkins, student pastor at the Kansas City area church.

“It was a roof membrane, and it peeled it off of the education building and knocked over a cooling tower,” Firkins said.

The storm occurred on Friday evening.  Firkins reported no one was in the building at the time, but he and his family had been there just about an hour earlier.  He said the building is used for Sunday school classes and Wednesday evening activities as well as a Christian school, which has finished classes for the year.

The damage was largely contained to the roof and cooling tower. The cooling tower was full of water which emptied into the building causing some water damage in the third floor classrooms.

KSHB TV news reported church officials were saying the building was constructed in the early 1970s but the roof that was damaged was just a few years old.

The City of Harrisonville said on their Twitter feed that no one was injured during the incident and it asked people to avoid the area while emergency responders contained the damage.

It also said people should use the incident as a reminder that it’s important to take safety precautions during severe storms.”This was not the work of a tornado, but still caused very significant damage,” the tweet stated. “Always make sure you and your family stay #weatheraware & have a severe-weather emergency plan in place.”

Firkins told The Pathway his takeaway was, “Bad things happen in this world.  But God takes care of us.  We sleep well at night because we can put our trust in Him and let him do His work.