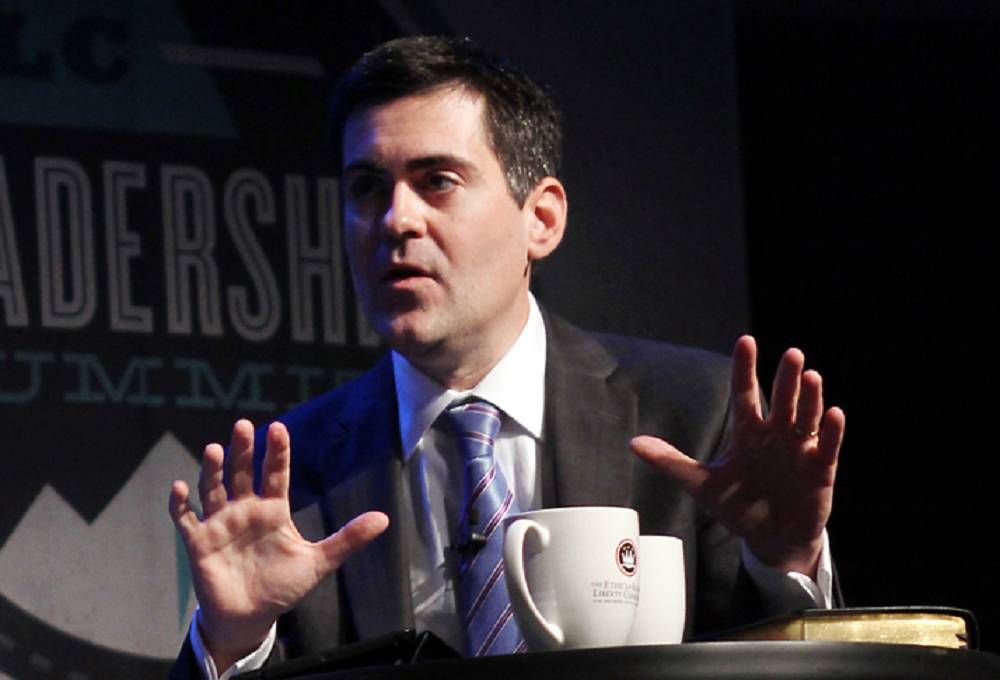 Russell Moore, during a Q&A on ethics, culture and the public square in 2014

Moore, who has served as president of the ERLC since June 2013, announced Tuesday (May 18) he will begin a role this summer as a public theologian for what the magazine described as “a new Public Theology Project.” In a message posted to his personal blog, Moore said the project “is devoted to cultivating a forward-looking, joyful, consistent Gospel witness.”

“I’ve struggled with this decision,” Moore wrote, “because my gratitude for the honor of serving the Ethics & Religious Liberty Commission is so deep. As I conclude my time serving Southern Baptists as ERLC president, I am filled with gratitude as well as excitement for the future.”

Moore said he was “thankful for Southern Baptists, whom I love and to whom I owe so much.” 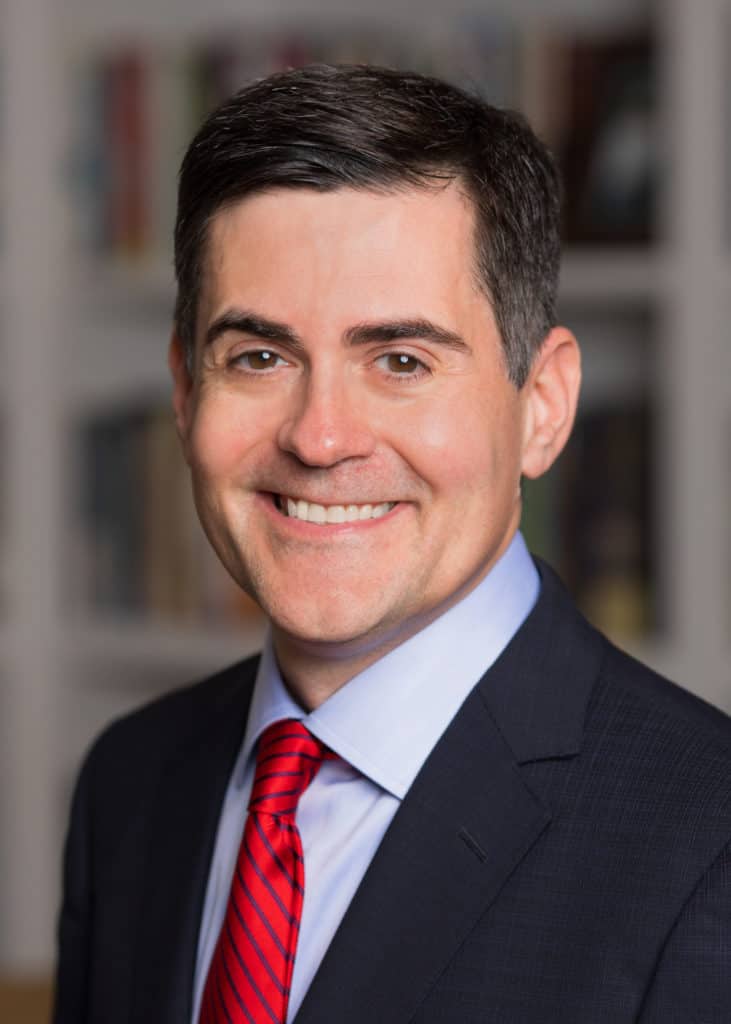 David Prince, chair of the ERLC’s board of trustees and pastor of Ashland Avenue Baptist Church in Lexington, Ky., expressed gratitude for Moore’s service and sadness over his resignation, which is effective June 1, but said the ERLC’s trustees would identify a new leader to continue the ERLC’s work, which he described as “essential to the SBC.” Daniel Patterson, the ERLC’s executive vice president, will serve as acting president.

Moore was the eighth president of the entity, which is tasked with helping churches understand the moral demands of the Gospel and public policy, as well as promoting religious liberty on behalf of Southern Baptists. Originally created by the Convention in 1913 as the Social Service Commission, it became the Christian Life Commission in 1953 and the ERLC in 1997.

In a release announcing Moore’s departure, the ERLC noted that under his leadership, the entity advocated for “human dignity, religious liberty and justice before Congress, the White House and the Supreme Court,” and touted accomplishments including:

But during Moore’s tenure, the ERLC has at times been a flashpoint of controversy within the SBC, most notably in reaction to his opposition to candidate and president Donald Trump.

In both the 2016 and 2020 elections, Trump received overwhelming support from self-described evangelicals. But Moore cited character deficiencies he said were disqualifying. In an op-ed column for the New York Times in Sept. 2015, Moore wrote that to support Trump, “evangelicals and other social conservatives” must “repudiate everything they believe.” He later attempted to clarify, saying he understood many of Trump’s evangelical supporters were motivated by biblical convictions and voted their conscience. But the backlash from some Southern Baptists was fierce.

In 2017, Jack Graham, pastor of Prestonwood Baptist Church in Plano, Texas, criticized Moore’s “disrespectfulness towards Southern Baptists and other evangelical leaders, past and present.” Prestonwood – one of the largest churches in the SBC –announced it would escrow Cooperative Program funds over “various significant positions taken by the leadership of the” ERLC.

In 2017 and 2020, task forces were formed by the SBC Executive Committee to study the ERLC’s impact on the Cooperative Program. The 2017 task force reported impact on the CP was “not as significant in fact as it is in perception.” The study found withholding to be “lower than anticipated,” identifying 14 churches as confirmed as “escrowing, designating or withholding funds” from CP estimated at a total of about $1.5 million.

At the 2018 SBC Annual Meeting, a motion attempting to defund the ERLC was rejected by an overwhelming margin.

In a report issued in February 2021, a second EC task force acknowledged both support within the SBC for the ERLC and that some see it as “a source of significant distraction from the Great Commission work of Southern Baptists.”

The task force report asserted that “the current perception of the leadership and direction of the ERLC by many Southern Baptists is a substantial impediment to the growth of the Cooperative Program,” with “potential for a measurable decline in the near future and beyond” if there are not “quick and significant changes in that perception.”

In response to the second EC task force report, Prince, the ERLC’s board chair, said: “I think Southern Baptists can see this report for exactly what it is and are ready to move on from this moment and focus on our mission together. The ERLC has served Southern Baptists faithfully during a time of political, cultural, and in some cases, denominational chaos. … All this and more is why I am grateful the ERLC serves our churches with a vibrant and bold Gospel witness day in and day out.”

Moore had previously served as dean of the school of theology and senior vice president for academic administration at Southern Baptist Theological Seminary. At his inauguration as ERLC president in 2013, Moore rooted the ERLC’s mission in proclaiming the Gospel, saying the kingdom of God is “not made up of the moral. The kingdom of God is made up of the crucified.” He also said the “end goal of the Gospel is not a Christian America,” but instead a Revelation 7:9 vision of “redeemed from every tribe and tongue and nation and language” dwelling in the new Jerusalem. He said on his watch, the ERLC would “stand as good American citizens,” fighting for justice, liberty “for all those things that have been [guaranteed to us] by the Constitution as Americans, but we will also remember that we are not Americans first. We belong to another kingdom.”

In announcing Moore’s hiring at Christianity Today, Tim Dalrymple, the president and CEO of the evangelical magazine, described Moore as “indisputably one of the most significant evangelical voices of our time,” adding in a statement: “He illuminates the relevance of the Gospel to the whole of life, from everyday matters of faith to the great debates in our society and culture.”

In a statement, Moore said he was “thrilled to join” Christianity Today, which he said “has meant a great deal to me in my faith journey.”

“On behalf of the ERLC board of trustees and Southern Baptists everywhere, I want to extend our deepest gratitude to Russell Moore for his eight years of principled, energetic and prophetic ministry. He led with integrity, courage and convictional kindness during tumultuous times. It has been our joy as trustees and fellow Southern Baptists to be on mission for Christ and His Kingdom with the utmost confidence in Dr. Moore’s leadership and in the effectiveness of the commission’s ministry.

“Though we are sad to see his time leading this entity come to a close, we wish him the best and will continue to look to his leadership and voice in American evangelicalism. The importance of the ministry assignment Southern Baptists have given to the ERLC remains essential to the SBC and our trustees will now begin taking the necessary steps to identify the next president for this organization.”