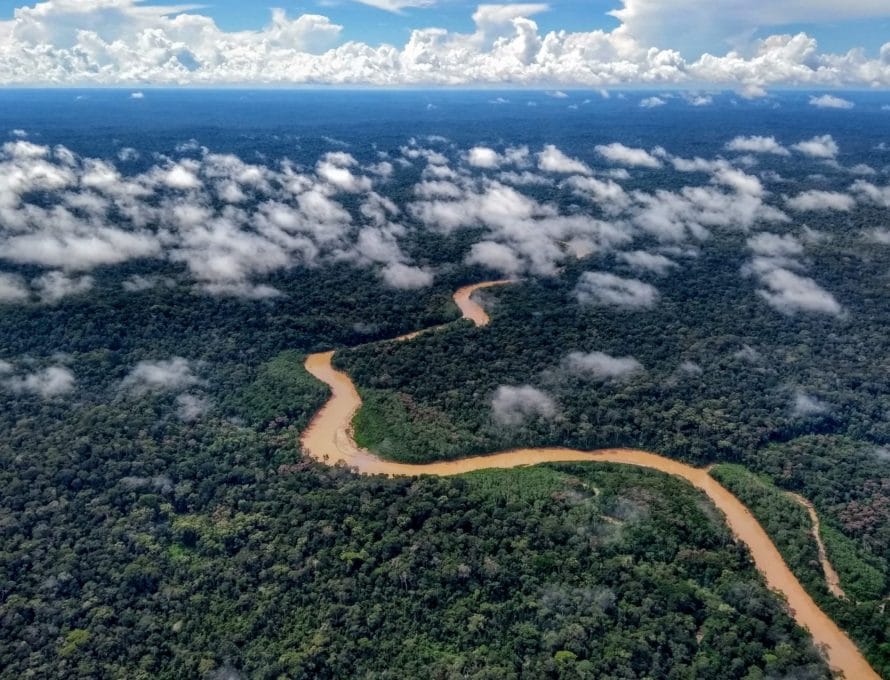 Accessing Akawa tribal villages and other remote tribes in Peru is not for the faint of heart – or the high maintenance! This aerial view of the Amazon rain forest was taken from a Cessna float plane. Missionaries and volunteers may only take one small dry bag, including a hammock, hygiene items and an extra set of clothing.

The small group of men boards a single-engine Cessna. After a little more than a two-hour flight, they land on a small airstrip deep in the Amazon rainforest. From there they board a boat and settle in for the ride. Their destination, an isolated village of a tribe called the Akawa*, is still more than seven hours away.

If this conjures memories of Humphrey Bogart and Katherine Hepburn battling mosquitoes and heat in the 1951 film “The African Queen,” you wouldn’t be too far off. Four times a year a group of IMB missionaries and their local partners board a small plane, then a small boat that will take them to the Akawa, an unreached tribe the team began working among in 2018.

Like many tribal people groups, the Akawa are animists who live in fear of the spirits that inhabit the world around them, said Joe Brewster, an IMB missionary who works with the small tribe.

“As animists, they tend to be pragmatic and go with what works as opposed to what may be right or wrong,” Brewster said. “They live far up an Amazonian tributary, just a step removed from the Stone Age.”

The Akawa are oral learners. They have some exposure to the outside world, but very little understanding of it, Brewster said. The Joshua Project, a research initiative that highlights unreached people groups, numbers the Akawa at about 400 people in Peru.

Edwin Blanco* is a church planter who lives in the Amazon basin. As the administrator of an indigenous mission organization, he has a burden to reach the Akawa with the good news of Jesus. He and Brewster have been friends for more than 10 years. The men, along with their respective teams, are partnering together to reach isolated tribes like the Akawa.

Blanco understands the importance of the gospel; it transformed his family. In the 1950s missionaries contacted Blanco’s tribe, and his grandfather chose to follow Jesus. Today, the church on Blanco’s river is firmly established, and the gospel has taken root among his people.

Blanco doesn’t want to limit the gospel to himself and his tribe. But he faces a problem. The organization he runs was founded with foreign funds and is dependent on ever-decreasing donations. He wants to focus on evangelism and church planting, but he and his colaborers must feed their families.

Blanco reached out to his friend Joe. Through hours of conversation, Brewster’s team helped Blanco and his team expand their vision for missions in a way that did not depend on foreign funds.

With help from the Lottie Moon Christmas Offering and other donations, the team has constructed nine working fishponds, with a goal to build up to 15 ponds. To date, the group has sold nearly 10,000 pounds of fish, Brewster said.

Brewster believes God will use tribal believers like Blanco to reach the lost in the Amazon. The team is already seeing gospel fruit among the Akawa. In the past two years, a number of people have come to faith in Jesus, been baptized and are meeting together regularly for discipleship.

“I am hesitant to call them a church; they rely heavily on outside discipleship and don’t yet have a strong local leader,” Brewster said. “But they are close. … We pray Edwin’s organization will (continue to) play a key role in getting the gospel to the places where it has not been preached.”

“Fulfilling the Great Commission is difficult work, much like carrying a heavy log out of the jungle,” Blanco said. “One man may be able to do it, but if we work together and help each other, the work is much easier!”

PRAY for Joe, Edwin and their teams as they share the gospel with the Akawa.
PRAY that many members of the Akawa will come to faith in Jesus.
PRAY that new Akawa believers will gather into groups and start churches.

View and download the resources for Week of Prayer: Day 4.