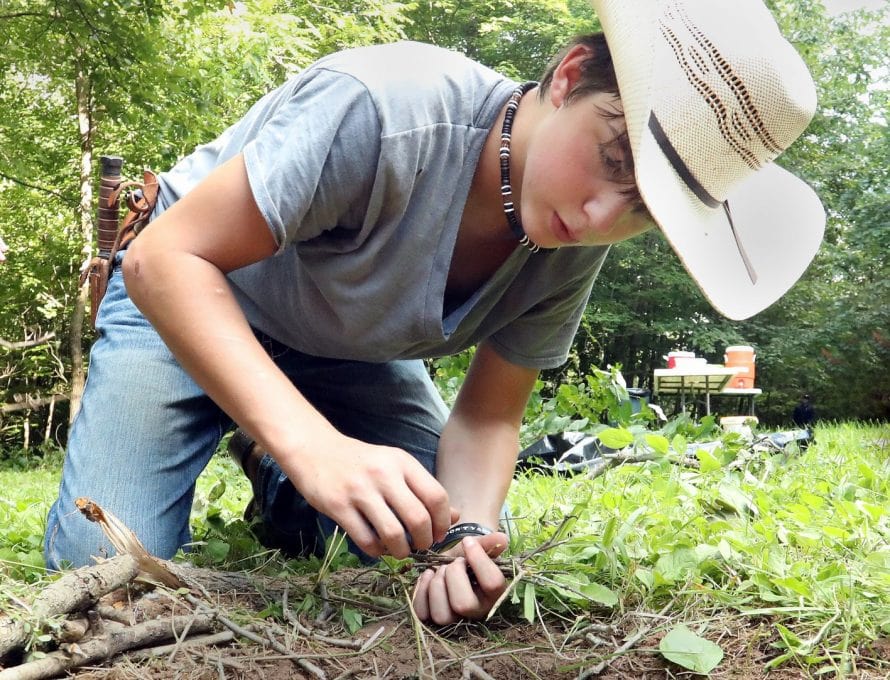 The overnight camp was Aug. 14-15 at Peaceful Valley Camp. The 27 boys and nine leaders represented 11 churches in the Cape Girardeau Baptist Association.

Mike Stone, who had the original idea, and has practiced some survival tactics, approached John Vernon, the director of missions for the Cape Girardeau Association, who told him to run with the idea.

“They learned to build an outdoor shelter, to build a fire, navigation, make primitive traps for small game, water procurement and purification, and how to make an everyday carry bracelet,” Stone said, adding that the latter was made with fishing cord that could be used in some of the other disciplines, but because it was worn, was inconspicuous.

As an example of biblical ties, the shelter building was connected to the parable Jesus told of the wise man building his house on the rock.

“The Bible is a good cross reference,” Stone said.

“Every survival part had a direct connection to the Bible. We can’t separate our spiritual and physical lives,” Vernon said.

“I’m a fan of primitive survival skills, not an expert on them,” Stone said.

Vernon said parents were not overly concerned about the COVID-19 threat, and social distancing was practiced in the cabins at the camp. Two weeks after the camp, there were no reported COVID cases among the camp participants.

“We want to teach the boys to be men, and we want the men to be leaders in their own homes. I hope it leads to a men’s ministry,” Vernon said, adding that maybe the boys involved will grow up to be leaders for another generation of boys.

“There was a lot of interest to do quarterly overnights. We’re just beginning to put that together. It’s the first time I’ve done something like this, and several parents called to thank us,” Vernon said.

Vernon said a similar girl’s event with crafts and Bible studies is being planned for Sept. 18-19, and a youth camp is set for Oct. 16-18.

With the survival skills activity, some of the adult participants learned of Trail Life USA, a Christian alternative to Boy Scouts, and Vernon and Stone both said it may be a partnership in future activities.