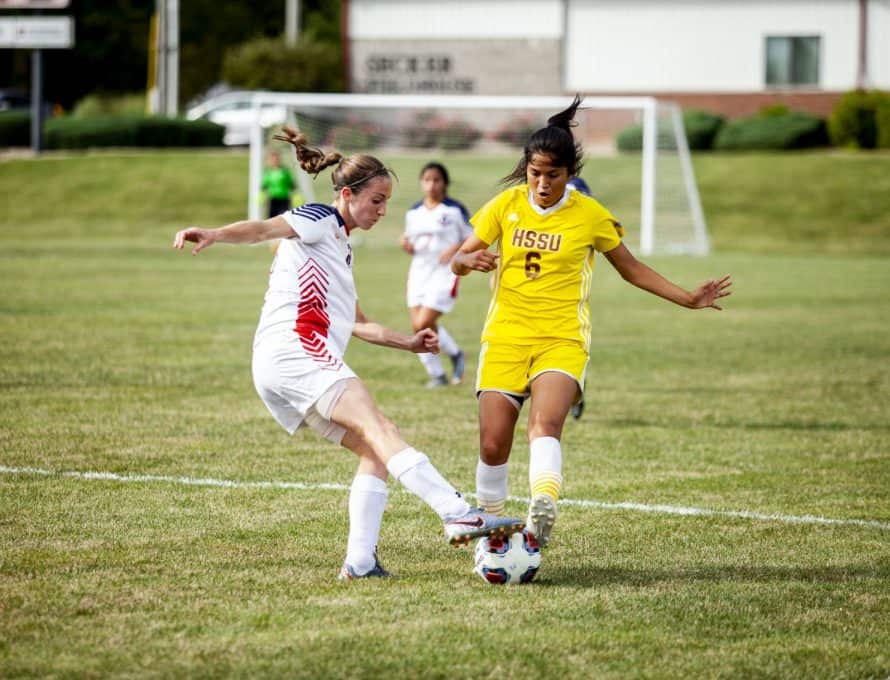 HLGU photos HANNIBAL – Hannibal-LaGrange University soccer player Sarah Rapp maneuvers the ball across the field during a game this fall.

The traditional understanding of the ‘soccer mom’ term is a mother who takes her children to play in soccer games. The way two Trojans lived it, they played collegiate soccer as they enjoyed motherhood.

Defenders Shelby Echelmeier and Sarah Rapp have each graduated from HLGU, but each had a year of playing eligibility left. Both of them are also mothers, Sarah to Esther, age 3, and Mordecai, age 1; Shelby to Arthur, age eight months.

The two were allowed to play to complete the team roster.

“I’m a resident director for one of the dorms, and most of the team is in my dorm. Some of them jokingly asked me to join. At first, it didn’t seem feasible at all. But a couple of the girls were persistent.

“I talked with my husband, Reid, and I guess I prayed negatively, ‘God, if you don’t want me to do this, close the door right away.’ He is in control of all things,” Shelby said.

Shelby, 25, graduated in 2015, and only played in home games to fulfill her job to be on-call/available as resident director. She and Reid are in the Masters in Leadership program at HLGU.

Sarah also alluded to joking with her involvement with the team, starting when her husband, assistant HLGU baseball coach Charles Rapp and head women’s soccer coach Jason Nichols talked about her remaining eligibility.

Sarah, 28, wasn’t sure at first. Who would watch Esther and Mordecai? Could she even do this again, having graduated in 2013?

“Our church secretary watched my kids during practices. I wasn’t interested in a master’s program, but I started looking at (other) classes,” Sarah said.

“Esther was excited to see the games and was sometimes watched by students. But Mordecai’s nap schedule was thrown off,” Sarah said

Sarah played both home and away game. Her first degree was in biology, but she declared another major of sports and recreation management. She took art appreciation, painting, English life and literature, and organizing and administering physical education classes.

“I thought I was done with all schooling,” Sarah said.

Shelby said Reid thought the idea “was crazy” at first, but has been really supportive and watched Arthur during games and practice.

“I know the strain of playing with too few players. This led me to play again. This was an opportunity to exercise and get back in shape. I subbed for the players. It all worked. It was fun to get to know the girls and play soccer again,” Shelby said.