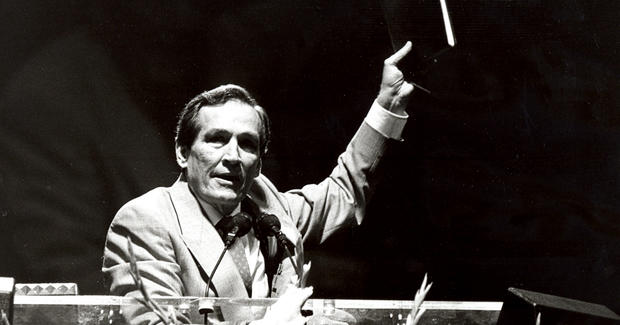 EDITOR’S NOTE: This is the twelfth article in a year-long series, commemorating the history of the Conservative Resurgence of the Southern Baptist Convention (SBC) in honor of its 40th anniversary. To read previous articles, visit www.mbcpathway.com/ConservativeResurgence.

MEMPHIS, Tenn. – Adrian Rogers probably stepped on more toes than any preacher in Southern Baptist history! We loved him for it because he always spoke the truth in love.

Few sounded more like a first century Apostle than the pastor of Bellevue Baptist Church in Memphis, Tennessee, from 1972—2005. I first heard Dr. Rogers at the old mid-town campus. His rich, resonant voice was captivating. Every point, pause, and phrase pulled at your heart-strings.

The power of Dr. Rogers came from his character, content, and connection with all firmly rooted in the authority of Scripture; those “golden pipes” helped! From his character, you sensed that he had been with God and deep into the Word. From his content or the words that he spoke came the ring of truth with meaning for today. He connected with his hearers through a passionate delivery of words, interpretation, arguments, alliteration, and illustration that demanded a decision.

Many young Southern Baptist leaders are ill-informed concerning the defining decades of the 1980s and 1990s in the Southern Baptist Convention and the price some leaders paid. Cicero once said, “To be ignorant of what happened before you were born is to remain a child always.” It is called the Conservative Resurgence. Certain pastors, theologians, and laymen stepped forward to make needed course corrections. The enemy of theological liberalism had already made ghost towns of other denominations; now it was scratching at our door under the guise of intellectual sophistication.

Liberalism mythologizes the Bible as not being a divinely-inspired record of revelation but more of a historical witness of the Jewish nation and the moral teachings of Jesus of Nazareth. The miraculous is moderated and sin does not separate. Authority-based orthodoxy gives way to rationalist thinking and human experience. The warp and woof of Southern Baptist belief had always been a firm and full reliability on biblical authority coupled with a cooperative spirit fueling our aggressive missions mandate. Who would raise the flag and be the tip of the spear for Biblical inerrancy?

The SBC “is a good old ship that has taken on much water and is slowly sinking. The choices seemed to be to abandon the ship or to man the pumps,” Adrian Rogers said according to his wife Joyce. She made the comments in 2014 on the 35th anniversary of his election as SBC president.

The 1979 Southern Baptist Convention in Houston, Texas, became the turning point for the Conservative Resurgence. Adrian Rogers was elected on the first ballot with 51 percent of the vote; however, he did not go there with the full resolve of allowing his name to be placed in nomination. What’s more, Rogers became embarrassed and upset when Dr. W. A. Criswell spoke these words during the Pastor’s Conference, “Well, this will be a great Convention if for no other reason than to elect Adrian Rogers as our president.” Since Rogers was preaching next, he said this made it look “like we were in cahoots and the thing was planned.”

Several things caused the reluctant Rogers to change his mind. First, the encouragement by legendary retired missionary Bertha Smith; secondly, a personal message delivered from professor Charles Culpepper, the missions professor at Mid-America Seminary. Finally, it was a midnight prayer meeting as Paige Patterson and Jerry Vines came to the hotel room of Adrian and Joyce. As the men knelt in prayer it is said that Paige got to weeping and Adrian got to praying and God moved into the hotel room giving Adrian the calm assurance his name could be placed into nomination.

At the June 11-13, 1985, Southern Baptist Convention in Dallas, a special committee was created to study and determine the sources of controversy and from their conclusions make recommendations to bring harmony. This group became known as the Peace Committee. They made their report on June 16, 1987, while Dr. Rogers served his second term as president of the SBC.

At a certain point in their many deliberations over the Bible’s inspiration, Rogers made his epic and unforgettable assertion after a lawyer from the moderate camp said to him, “Adrian, if you don’t compromise, we will never get together.” Rogers kindly replied:

Roland Maddox, a longtime friend of Dr. Rogers and member of Bellevue Baptist Church, said in an interview with Gerald Harris that, “I think those words were the turning point in the effort to restore our denomination to Biblical inerrancy.”

Adrian Rogers loved Jesus first and foremost! He dearly loved his wife and family. He dearly loved the Word of God. These great loves helped him finish well in ministry.

Before slipping into unconsciousness after a battle with pneumonia and cancer at the age of 74, Dr. Rogers shared these last words with those gathered in his hospital room, “I am at perfect peace.”

The New York Times covered the death of Dr. Rogers on Nov.16, 2005, and concluded with a quote about his accomplishments in life: “I think the part that God allowed me to have in the turning of the Southern Baptist Convention may have the longest-lasting effect and be the most significant.”

Thank you, Dr. Adrian Rogers, for being the prophet of the Conservative Resurgence — your courage was contagious! Your voice is still heard.