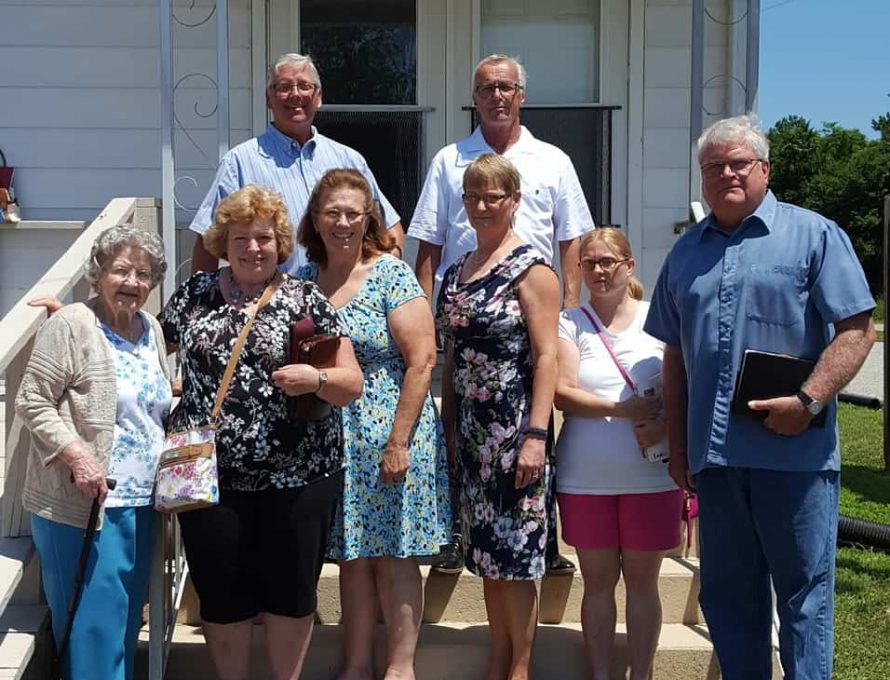 This summarizes the God-ordained restart of Little Vine Baptist Church.

Safe Harbor was a home Baptist church, unable to grow and build a permanent structure. Its pastor is Rev. Kennard Mayfield. Meanwhile, Little Vine Baptist had some apparent issues and was in the process of closing last fall.

Genevieve Baptist pastor Rev. Elmer Killian heard of the possible closure of Little Vine, and was troubled by that.  He prayed with Little Vine members. He prayed with his wife. He had his church pray, and had Rev. Mayfield pray about this. It was partially personal.

“It bothered me; I knew down to the Missouri fiber of my being, God wasn’t done with that church. Little Vine was the place where I was saved and baptized at age 11. My grandfather preached periodic revivals there,” Killian said.

During a fall 2017 revival service in Genevieve, attended by Mayfield where Rev. Leroy Wakefield was preaching, God spoke. (Mayfield and Wakefield are both former pastors to Killian.)

“The last night of revival, I got up to make announcements, and the power of the Holy Spirit was so strong, I couldn’t talk for a while. I challenged Genevieve to sponsor the reopening of the Little Vine and had 100 percent vote. The Lord laid it on my heart that Safe Harbor, which had been a home church for 11 years and had faithfully supported their pastor and two missionaries, should have the structure,” Killian said

Killian hadn’t talked to Mayfield before God spoke to Killian at the revival.

“Little Vine is a landmark. They have a cemetery with some gravestones that go back in the 1700s,” Mayfield said.

Little Vine did close for about three months while the churches negotiated details. The property was given to Safe Harbor.

“We (re-)started with less people than the old Little Vine had when they closed. We kept their name because of their identity in the community. It’s pretty much a total restart. It’s exciting for us,” Mayfield said.

On June 10, the re-started Little Vine held its first service, with about a dozen people. Since then, there have been visitors, some referred by the sponsoring Genevieve church. By early July, Little Vine had begun addressing bathroom, kitchen, sound system, and roof issues.

“We have nothing to lose here. We’re just following the Lord, who seems to be in it,” Mayfield said.

Killian said the building gives the new Little Vine “a home base, a mission field, a place to grow and take roots.”

“It was a natural fit. Safe Harbor had the people, but no building. Little Vine didn’t have the people but they had a building,” Pope said. “We are working through Genevieve to support Little Vine. Churches plant churches. We just partner with them.”

Killian’s church is also helping Pine Log Baptist in Ste. Genevieve move pews out then back in after church remodeling.

Pope said this is the second replant in his association, the first being Second Baptist of Fredricktown, which went from four people to the mid-20s.

“They (Second Baptist) are on their way back. They will do their first community VBS in several years,” Pope said.

“I think it will also work at Little Vine. They are strong people. It gives them the opportunity to reach out,” Pope said.