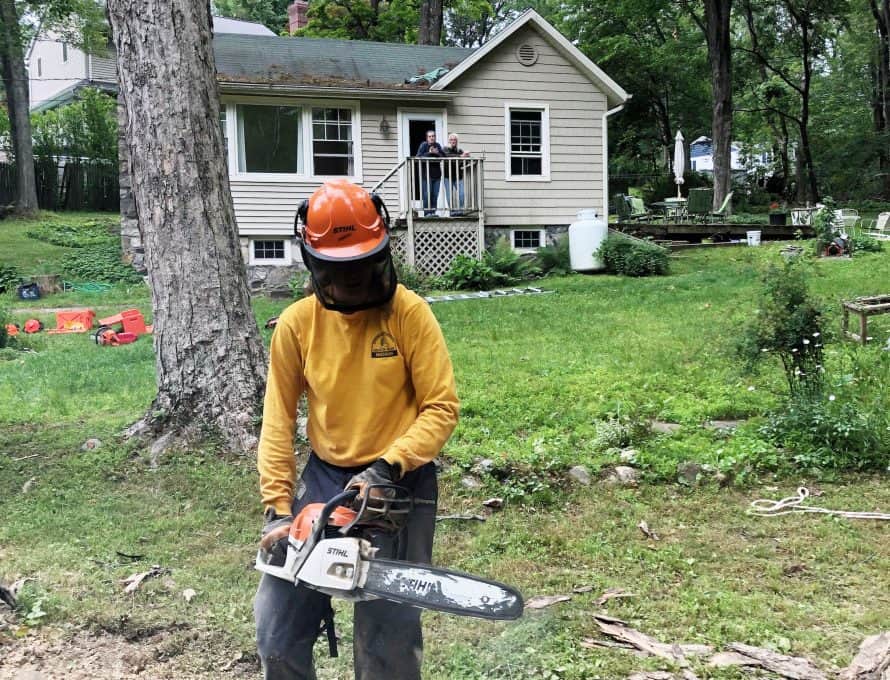 SOUTHBURY, Conn. – When tornadoes ripped through Connecticut this May, they left chaos in their wake. Thousands of homeowners were left with downed trees, debris and nowhere to turn for help. In the midst of such devastation, teams of volunteers from across the country stepped up to assist in recovery.

One of those teams was a group of Missouri Baptist Disaster Relief’s collegiate interns. Armed with a chainsaw, a wood chipper and the Word of God, DR volunteers provide hope, healing and a strong witness to those affected by disasters.

The collegiate intern team spent most of their time cutting up fallen trees, clearing brush and removing remnants of the storms. The hours spent with a chainsaw and a wood chipper were long, loud and grueling. But their knowledge of disaster relief methods helped them to make connections with various homeowners.

One of the homeowners the collegiate team assisted was a woman named Samantha. According to Collegiate Disaster Relief Coordinator Joe Banderman, when they arrived Samantha had 39 downed trees in her yard. He and his team cleared the debris as best they could, and the results had a profound impact on Samantha.

“There was no way she could have taken all that junk out of her life,” Banderman said. “I got to say to her, ‘God will take your junk, He’ll restore it and He’ll make it beautiful.’”

The opportunity that Banderman and his team had to witness to Samantha is part of what makes DR such a special ministry. Armed with a chipper and a chainsaw, the DR teams are uniquely positioned to reach hearts for Christ.

DR intern Erin Pearson, 23, has seen firsthand how DR opens doors for witness and testimony. The work done by Missouri Baptist DR is funded entirely through the support of Missouri Baptists, which means the homeowners are given assistance for free. According to Pearson, that fact often creates confusion.

“The question we get at every single home is ‘why?’ It opens the door right then and there to share, because the reason we do it is because of Christ,” Pearson said. “In a way no other ministry does, [DR] puts those opportunities in your path.”

The DR volunteers take full advantage of those open doors. According to DR intern Riley Elliot, 21, the team attempts to pray with each homeowner they work with. And after every job, they give the homeowner a Bible signed by each member of the team.

One such Bible made a huge impact with one of the homeowners – a World War II veteran named Nick. According to Pearson, Nick was overjoyed at receiving his Bible. So much so that he didn’t want to let it go.

“You have to trust that you planted the seed and that God’s going to take care of it from there,” Pearson said. “A callout can end and all of the volunteers go home, and you just have to trust that what happened there was real, and that the church there will continue to work.”

“When we prayed, we all joined hands and he wouldn’t put the Bible down,” Pearson said. “Joe (Banderman) held the Bible for him because it was so precious.”

During their time in Connecticut, the DR collegiate team made connections and developed relationships with believers and non-believers alike. However, there comes a time in every trip where they have to go home – even if that means leaving behind homeowners that have not yet made a decision to follow Christ.

“You have to trust that you planted the seed and that God’s going to take care of it from there,” Pearson said. “A callout can end and all of the volunteers go home, and you just have to trust that what happened there was real, and that the church there will continue to work.”

For the members of the DR collegiate team, their time in Connecticut was a blessing – not only because they were able to help others, but also because they ended up being blessed as well.

Each member of the team learned something through their time with DR. For Elliot, DR has helped her in her walk with Christ.

“It has definitely made me rely on God a lot more…I can’t do it all,” Elliot said. “If I rely on my own strength, then I’m holding myself higher than God.”

Pearson, too, has grown in her faith as a result of her involvement in DR.

“It’s shown me a lot about who God is,” Pearson said. “I’ve learned a lot about seeing Him in a more real way.”

After two weeks of working hard and sharing the gospel in Connecticut, the DR collegiate team returned to Missouri emotionally and physically wrung out.

“It can be the most exhausting, difficult week,” Pearson said. But “the look and the realization that they see a hope…They can start living their life again. That makes it all worth it.”

Banderman came back to Missouri tired and thankful for the resources available.

At the time of publication, the DR collegiate intern team is in Texas, working to assist homeowners who have experienced flooding from the Rio Grande. Banderman asks for prayer for his team, so that they may stay safe and share the gospel far and wide.