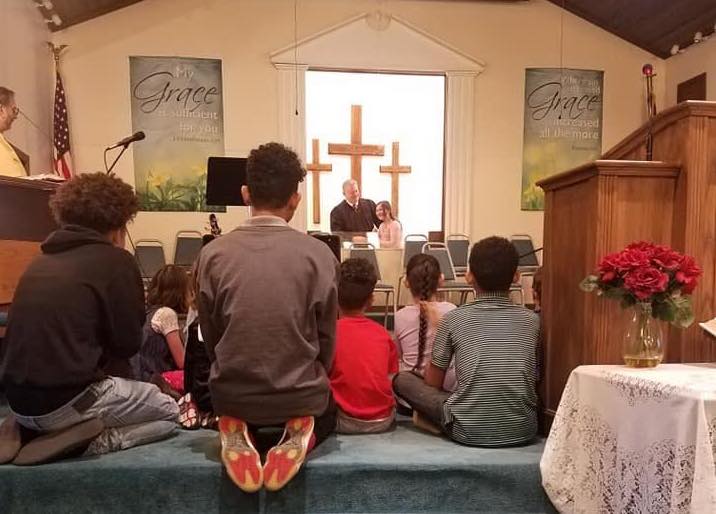 ROLLA – Steven Betts, pastor of Fort Wyman Baptist Church, baptizes as other children who have recently been baptized look on. Submitted photo

“As I was putting on my shoes getting ready for church,” he said, “I paused for a second and prayed, ‘Lord, bring me a family today.’”

God answered his prayer, and went far beyond Betts’s expectations.

Three weeks later, Betts was on his knees again, asking God for another family. A couple who had been invited by an elderly member of the church showed up. Along with their three children. Fort Wyman had gone from three kids, to six, to nine.

They joined a few weeks later, and before too long, their three kids accepted Christ in Sunday school and were baptized the next week.

That family has become a catalyst, bringing in many of their kids’ friends each week.

“On any given Sunday morning, they may show up with their three kids plus another 12-15 extra kids,” Betts said.

During Vacation Bible School last summer, a dozen kids came to Christ and were baptized. In the fall, Fort Wyman restarted a concerted children’s ministry on Monday nights.

In the past two months, six more kids have accepted Christ.

Betts said there is no explanation for the harvest other than God’s timing.

“For the last decade I’ve been praying for something to happen,” he said. “We’ve knocked on doors, given out flyers, and hosted a carnival at the church. We just haven’t gotten any response. At times, I’ve really been disheartened. I told God, ‘If I’m the problem, get me out of here.’ We just had to wait on God’s timing.”

Betts said the rest of the church has responded to the revival among its children.

“It’s affecting the adults, senior citizens, and the middle aged in the church,” he said. “I‘ve never seen such a response.”

Betts said he is frustrated that the COVID-19 pandemic means the in-person children’s ministry must be paused temporarily, but he’s praying for a creative way to continue to reach and disciple Rolla’s children.