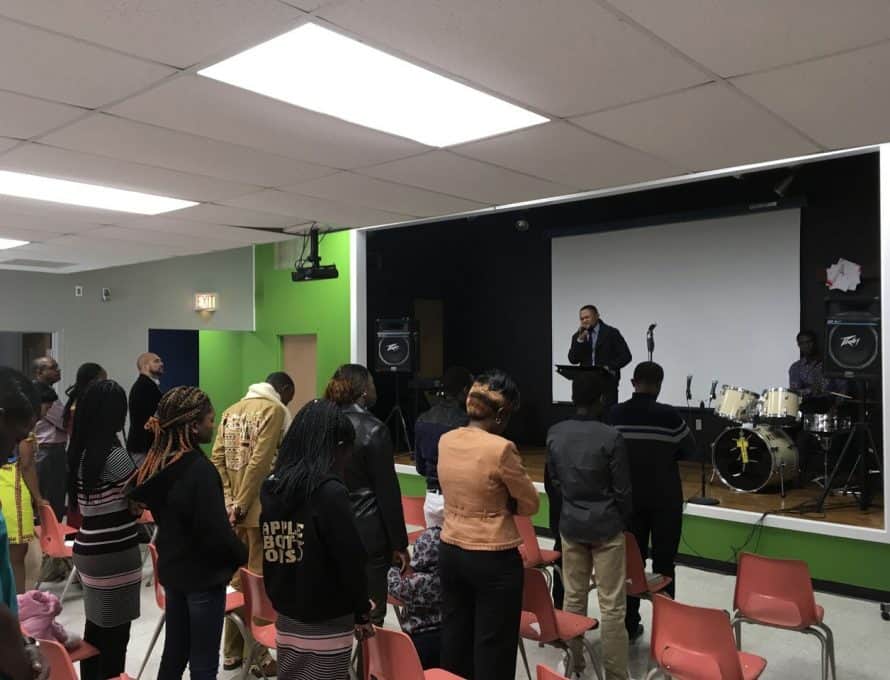 KIRKSVILLE – A French-speaking congregation was formed November 19th at First Baptist Church, Kirksville.  Joel Kabamba, a 2015 immigrant from the Democratic Republic of the Congo, is the pastor of the new mission church.

Pastor Jason Marlin, pastor of FBC Kirksville, said “Congolese people started coming to the church.  There are a lot of them out there.”

They are moving to northern Missouri to work in two pork processing plants in Kirksville and Milan.

Carolyn Chrisman, director of the Kirksville area economic development office, estimates there are about 500 Congolese immigrants living in Kirksville, with a couple hundred more located in Milan about 30 miles west in Sullivan County.

“We met Joel when he started coming about two years ago.  He attended consistently and told me he had surrendered to ministry.  His father is a pastor in The Congo,” Marlin said.

The two pork processing plants, Kraft Foods in Kirksville and Farmland Foods in Milan, typically employ a lot of Hispanic workers, but recently started hiring Congolese and other African immigrants in their workforce.

Marlin said the First Baptist Church was approached by another non-denominational French-speaking Congolese church about using their building. They assisted them by hosting an event.  Some Congolese people began attending First Baptist and responding to ministry and outreach with their children.

“We know some of them need to learn English. They have responded to our kid’s ministry.  We are trying to incorporate them in our church.”

Some prefer the English worship, but many want to worship in their preferred language of French.  A desire to begin a French service began to be expressed.

The church became aware that Brother Kabamba, who is 26 years old, had a desire to attend Bible college.  He applied at the Midwestern Baptist Bible College and Seminary in Kansas City.  However seminary officials encouraged him to delay entry until his English skills were improved.

So he enrolled in a 4 month English language course offered by a company located on the campus of Truman State University.  The teacher at this class is a member of First Baptist.

Robbie Shedron helped Joel with the intense course this past fall.  He picked up on the language quickly and speaks English quite well now.  He preached at FBC Kirksville as one of his final projects for the class.

After about five months of planning, the first worship service was launched and 29 attended, including two young Chinese students who were with Brother Joel in the English class.

Omar Segovia, a multiplying churches missionary with the Missouri Baptist Convention, has been assisting the church and Brother Joel. Segovia’s participation in this church plant is only one example of how the Cooperative Program has helped Missouri Baptists multiply churches across the state.

“I am proud to be a part in a supportive way to Joel’s church panting work in northern Missouri,” Segovia said.

“I think both of us recognize that him remaining in Kirksville was a sign from God and the Lord wants to do a work among the African people in north Missouri.

Kabamba said there are ups and downs in church planting.  They had 29 people attend a spirited worship service on the first Sunday, but there was a low attendance Sunday two weeks later when he was the only one who showed up.  There was a funeral for a young mother who was killed in a  tragic car accident as she was driving to work in Sullivan County.  She left behind a grieving husband and a young child.  Her funeral was scheduled for a Sunday and the whole Congolese community attended the funeral and a meal at a rented hall afterward.  No one came to the new church that day except the church planter.

But he is optimistic.  Recently they have received gifts of French Bibles, guitars and sound equipment from FBC Kirksville and the Thousand Hills Baptist Association.  The church provides space in their youth room on Sunday mornings and there is a drum set and keyboard available to the church plant.

Kabamba said, “My parents helped me come to the U.S. and then we had money loaned to us from a friend who was already here.”

He worked in Milan at Farmland Foods for almost two years to help pay back the loans and provide for a place to stay in an upstairs apartment on the Kirksville town square.

“We had brochures printed in French inviting people to come to the service,” he said.

Following the first worship the Congolese were invited to join the First Baptist congregation for a Thanksgiving meal.  Some of the food was new to them, but they recognized some of the dishes like sweet potatoes and corn casserole and enjoyed the fellowship with their sponsoring congregation.

“I was surprised to see that many” Kabamba said.  “I watched my dad planting churches (in Africa) and sometimes it is very hard.  I was overjoyed.”

He said he is grateful for the support of the First Baptist Church and the Thousand Hills Baptist Association as they have made preparations to begin the worship in the language of his people.

Already, one other church in the association, Broadlawn Baptist, Unionville, has committed an additional $100 per month in support to the new church.

Marlin and Segovia are working to gain support from the Missouri Baptist Convention and the North American Mission Board as well.