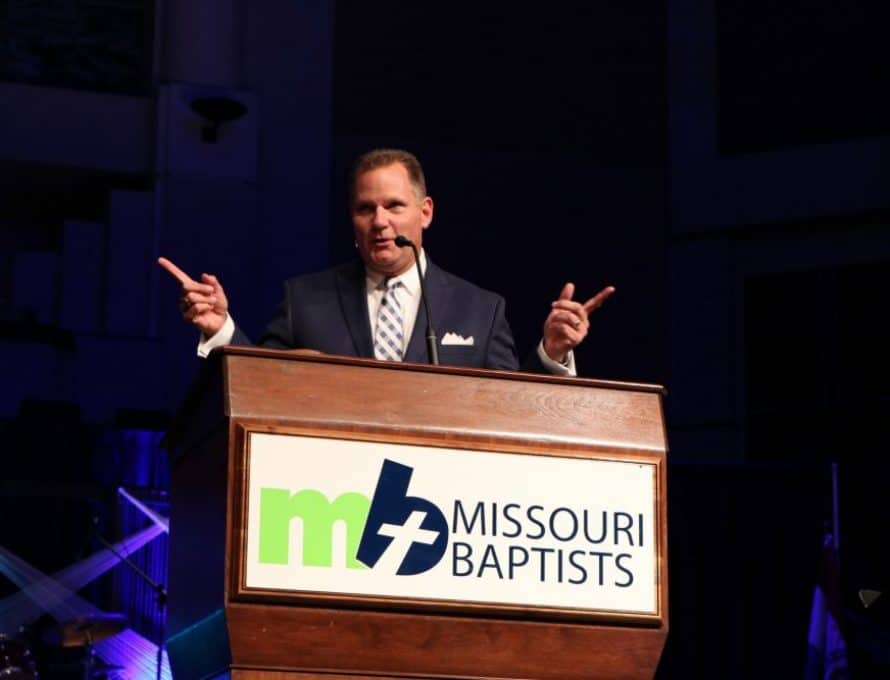 RAYTOWN – “Don’t Worry, Be Holy” was the theme of the presidential address spoken by MBC President Ken Parker, who is the pastor of First Baptist Church, Kearney.

He spoke about Jesus’ teachings in Luke 12:22-31. The Lord told His disciples not to be anxious about several areas of their lives.

One of them is the encouragement to not be anxious about life in general.

Parker said, “There are a lot of people who think President Trump is the Messiah. He’s not. Some think he is the Anti-Christ. He’s not.”

He gave other examples about the need to not be anxious. “We don’t have the luxury of fighting over secondary issues today. Those days are gone.” He mentioned ISIS attacks. “Your neighbor may even be on the other side of your side.”

He then mentioned the battles for control of Missouri Baptist entities in the last 15 years. Referencing the MBC Agency Restoration Group’s work in restoring the seating of MBC elected trustees he said, “This is not a time to throw stones, but to exchange casseroles.”

Another example given was Calvinists and Non-Calvinists. He referenced church tax exemption when he said, “It is better to lose tax exemption than to lose Biblical conviction.”

Parker then said Christians should not be anxious about what they will eat. Jesus said, “Therefore I say unto you, Take no thought for your life, what ye shall eat; neither for the body, what ye shall put on” (Luke 12:22). He told a story about a Baptist college counselor advising him “not to be a preacher if he liked to eat.” Parker said he hasn’t missed any meals and he’s still a preacher. The college counselor resigned and left the college the next year.”

He mentioned not to be anxious about your body saying “There won’t be any workout gyms in Heaven.”

What you wear is another area of anxiety for believers and Parker said “What we wear speaks volumes about what we feel about ourselves.” Addressing modesty, he said “Girls, don’t dress like prostitutes. And guys, don’t go around with your pants around your knees. Jesus loves you the same no matter how you look and so should the church.”

“We are looked at like we are crazy by the world, but don’t get bound up—live for Jesus. Realize the world is wrong.”

He began to conclude as he said “God takes care of the birds, the flowers, and the grass. He can handle you.”

“Seek Jesus” he said as he quoted Luke 12:32 “But rather seek ye the kingdom of God; and all these things shall be added unto you.”

Parker then told the story of Fred Craddock, a renowned preaching professor at Emory University. Craddock’s daddy did not go to church most of his life. He didn’t like the church or the preachers.

When the pastors and evangelists would come by his house he would say “The church doesn’t care about me. The church wants another name, another pledge.” He resisted the gospel all of his life.

Parker said, “But one time he didn’t”

Mr. Craddock had gone into the VA hospital and was down to about 70 pounds. The X-rays of radiation had scarred his vocal chords so he could not longer speak.

In his hospital room flowers were sitting all over the room and even on the meal tray table.

Professor Craddock came back home to see his daddy before he died. He was looking at the cards on the flowers. Almost all of them from the church and church members.

The elder Craddock saw his son reading a card and he reached for a pencil and wrote on the side of a tissue box a quote from Shakespeare. He scrawled “In this harsh world, draw your breath in pain to tell my story.”

“What is your story Daddy?” asked Professor Craddock.

The elder Craddock picked up the pencil again and wrote, “I was wrong.”