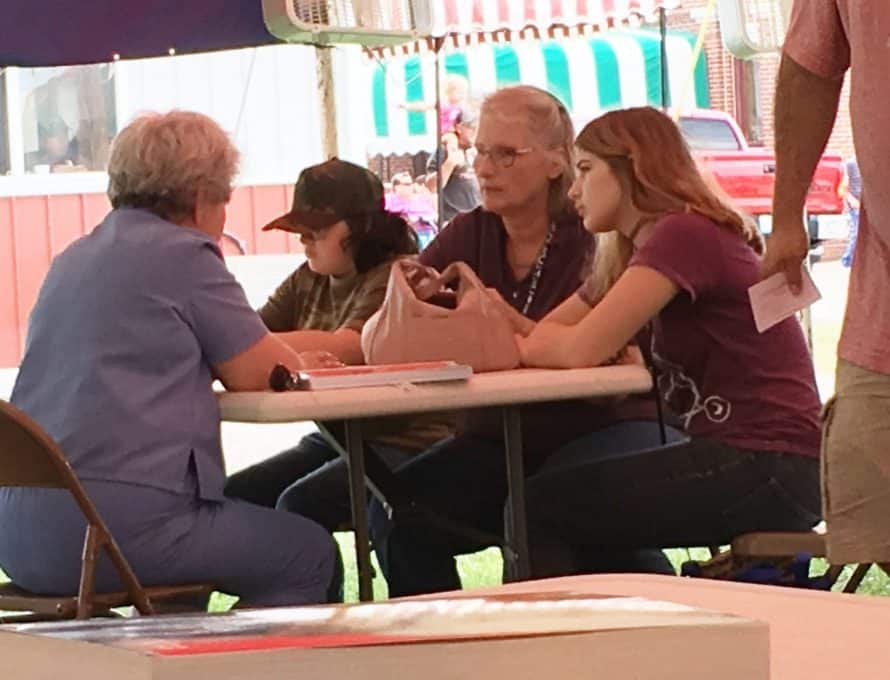 SEDALIA – A volunteer from Shoal Creek Baptist Association, Anderson, shares her 3-minute testimony with a group of visitors to the Missouri State Fair here in mid-August. Pathway photo by Richard Nations

SEDALIA – “I’m a gambling man. I will bet you five dollars that they will take more than three minutes if I go in that tent,” said the man at the entrance to the state fair Baptist tent.

Now that was a throw-down. The man was responding to an appeal to come into the Baptist tent at the state fair and sign up for a giveaway of a merchandise gift card. But all that was being asked of the registrants was “three minutes of your time.” Tent volunteers were trained to share their testimony of faith in three minutes or less before allowing the registrant to fill out the card for the giveaway.

Sometimes the registrants were interested in hearing more about the gospel and the conversation would continue longer—with their consent.

He directed the registrant to a fellow volunteer. He watched closely as the volunteer shared his testimony in 90 seconds. Then, surprisingly, the gambling man registrant sat there a half hour talking to the volunteer about faith in Jesus Christ. And he didn’t come back and try to collect on his bet.

A little over a thousand people would have this kind of encounter at the Missouri State Fair, which was held August 10-20. The Missouri Baptist Directors of Missions Fellowship, in cooperation with the Missouri Baptist Convention, sponsored the giveaway of three merchandise gift cards. Twenty six different teams of volunteers from associations and churches around the state staffed the tent and shared their faith with those who would agree in order to register for the prizes.

As of The Pathway’s press deadline, there had been 894 gospel presentations resulting in 47 recorded professions of faith.

State Fair Committee co-chairman, John Brittain, director of missions for West Central Baptist Association, Warrensburg, said “God has used the volunteers under the tent to see many won to Christ.” He added, “Wouldn’t you like to come join us next year?” He said they are thrilled with the number of professions of faith.

Three other DOMs from around the state served on the committee along with some pastors and MBC staff.
Josh Branham, pastor of Fairview Baptist Church, Joplin, led a team to serve at the tent during the first weekend. He is the evangelism team leader for

Spring River Baptist Association. Branham said, “It is a good opportunity for people to register for a prize. But for someone who doesn’t know Jesus, there is a far greater prize—the opportunity to be saved.”

He said they had many opportunities to pray with people. One man said, “I don’t want to sign up for a prize. I just want to come in and talk and pray.” He poured out his heart and told of a broken marriage. At the end of the conversation, he prayed with tears in his eyes as Branham assured him of God’s love for him.

John and Elizabeth Beck, pastor and wife at First Baptist Church, Anderson, in Shoal Creek Baptist Association, brought a team which included several teenagers. Elizabeth said it was good opportunity to put evangelism training into practice. John said they were able to recruit ten people to do the 2-day mission trip. They spent the night at the Baptist Ridge Camp in Warsaw prior to coming to the fair. He said it only cost the group about $500 total to do the mission trip.

Frank Fonseca, of the Spring River Association team said the whole experience was well organized and allowed a place for quiet servants of the Lord to share their faith.

John Brittain remarked that one of his West Central Association pastors, Robin Dale, made the observation that “if you are going to go fishing, it is good to do it in a stocked pond.” Brittain said the state fair pond is well stocked with lost people eager to come in and win a $1,000 gift card. Along the way dozens of them heard and received the gospel message, turning their lives over to Christ.

Organizers said all the names and contact information of those receiving Christ will be sent (with the registrant’s consent) to pastors in their home communities for follow up and an invitation to church.

The team feels the effort to evangelize during the fair is well worth the effort. And they will do it in “three minutes or less!”