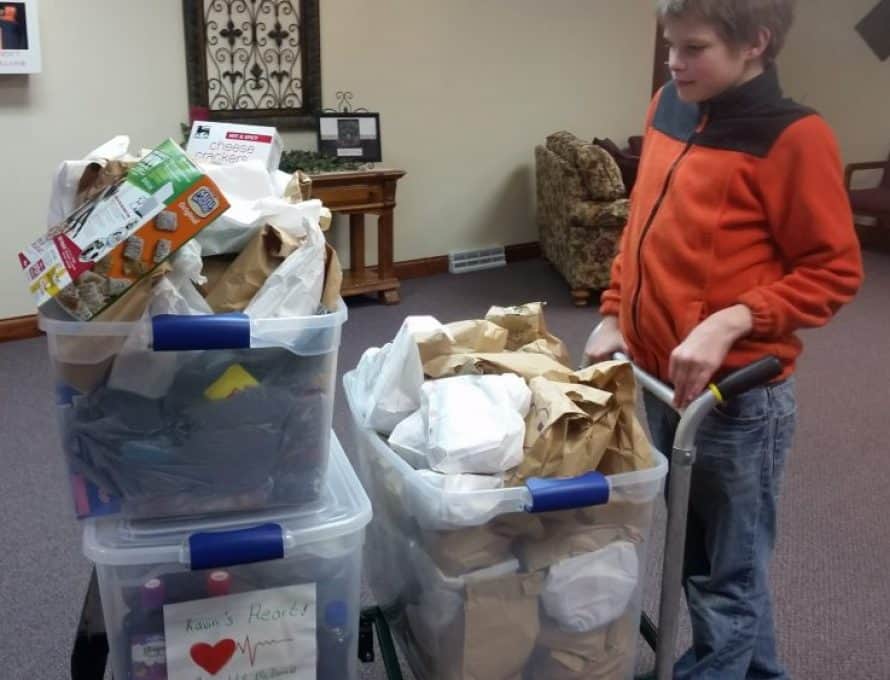 KIRKSVILLE – Kavin Tingley and his parents, Charles and Tammy Porter, have stayed at Ronald McDonald Houses in several states as their family searched for a diagnosis and treatment for Kavin’s heart condition. They always felt welcomed and cared for at these homes, provided by funding from the McDonalds Corporation. Families with sick children are invited to stay in the homes during their hospital stays and medical appointments.

Kavin and his mother decided they should give something back to the homes and their residents so they asked their church to help them go to Kansas City and provide a hot meal every few months. Church members joined in the effort.

They call this ministry Kavin’s Heart, named after young Kavin, age 14, who has a rare condition called Timothy’s Syndrome. This heart condition is very rare and requires frequent trips to the hospital. In fact they had to go to three hospitals during the summer of 2016 to receive the definitive diagnosis.

Tammy Porter is the missions committee chairperson at her church, Hamilton St. Baptist in Kirksville. She mentioned the need to the committee and they rallied around to the cause and one member suggested they should call the project “Kavin’s Heart” because Kavin’s heart is the medical issue driving the Porter/Tingley family to seek the medical help. It has become an ongoing project, about every other month. About 6 – 8 participants go on the trips.

Kirksville is about a three hour drive from Kansas City, so the group rises early to get on the highway and arrive at the house near St. Luke’s Hospital in Kansas City by breakfast time. They bring in food and supplies and set up a nice buffet of pancakes, eggs, sausage as well as biscuits and gravy.

Residents are very grateful for the nice meals served.

Mackenzie Lutz, volunteer coordinator for the Kansas City area Ronald McDonald Houses said, “It really helps eliminate stress for families who don’t have to worry about meals while here.”

She added, “They can stay and not worry about meals, so it is very helpful to them.”

Lutz said there are many groups offering to bring meals in and they only have to spend about $1,000 per year at the house for essentials like condiments, spices, paper products, etc. because of the support of area churches and civic groups.

When the Porter and Tingley family was staying there last winter they were talking about how they could give back. Mrs. Porter suggested to her son maybe a meal would be nice.

Kavin said “He thought would be a good idea to have a group bring some brunch in. It was kind of quiet around there.”

Kavin has to stay there for two or three days at at time. “I’ve met a few friends down there,” he said. Kavin also has a diagnosis of Asperger’s syndrome so he has a hard time communicating.

His mother said the home is especially quiet around holiday times. Kind of lonely.

There are often tickets for area attractions in the Kansas City area available to the residents. The Porter/Tingley family have gone to LegoLand, Crown Center and the Kansas City Zoo while staying there. They appreciate those gifts.

Lutz said she would welcome other churches to connect with the Ronald McDonald House and invited them to contact her at (816) 842-8321 to learn of volunteer opportunities.

Mrs. Porter told of staying at the home in Salt Lake City last summer and they were able to befriend the parents and two little girls who were of the Amish faith. “They were under considerable stress. We called back later to check up on them and see how they were doing.”

“A Hispanic lady was working in the kitchen in that home and she knew every child by name. She would prepare gift bags with a special snack just for that child every day.”

Mrs. Porter added, “She would pray for every family daily. That was especially comforting one day when one of the children passed away.”

“It is really good when people come and visit, bring food and pray with you,” she added.

The Kavin’s Heart group brings additional paper products and toiletries for the residents. They provide gospel tracts and Bibles for all who want them and they pray for the residents if they are open to it.

Breakfast, lunch or dinner—even brunch is much appreciated she said. If any would like to network with Kavin’s Heart, they can contact Mrs. Porter at (660) 349-7222 or e-mail: portertammy30@gmail.com.