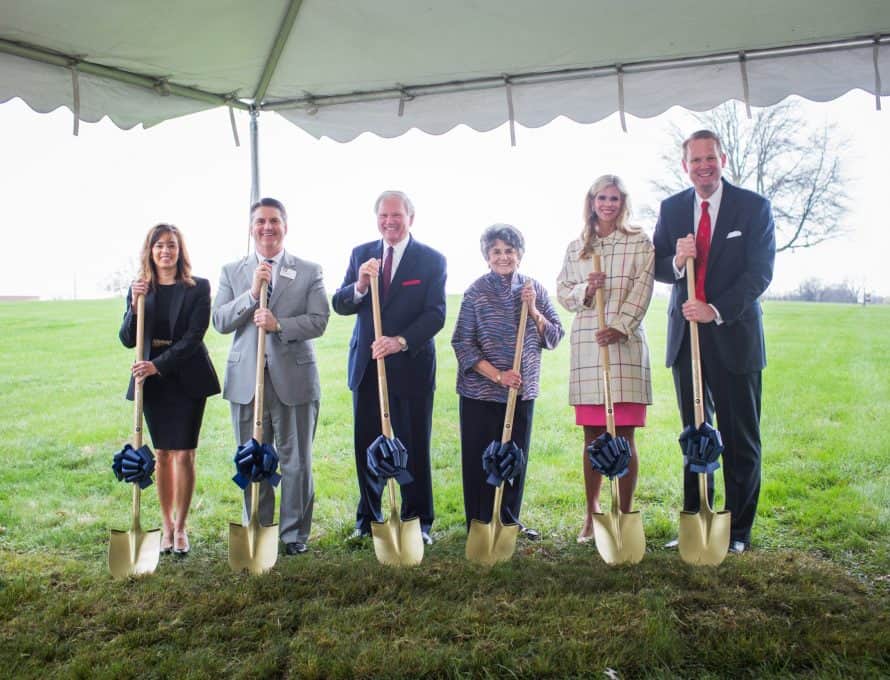 KANSAS CITY – Assembling for its spring meeting on April 3-4, members of Midwestern Seminary’s Board of Trustees conducted significant seminary business and celebrated the groundbreaking for the institution’s forthcoming 40,000 square foot student center.

The week’s highlight came on Tuesday, when the seminary community welcomed trustees and seminary supporters, as well as leaders from around the Southern Baptist Convention, to ceremonially break ground at the site of the future Mathena Student Center.

President Jason Allen said that in the seminary’s original documents from 1957 there exists a statement expressing the founders’ desire to have a student center built as soon as possible. Even though it’s taken some 60 years, he said now is the time God chose for “as soon as possible.”

“We celebrate this project not because of stone and mortar but because of what it represents in God’s faithfulness on this institution and our ability to serve together,” Allen said. “At the same time, if you read the Old Testament, you notice that the Israelites were commanded by God and were to be intentional to commemorate and celebrate certain acts of God—providential deliverances, unexpected provisions, unanticipated military triumphs, and many other events. So, it is good and fitting and right today that we do just that.”

Allen then invited Harold Mathena, a bi-vocational pastor and businessman from Edmond, Okla., to the stage.  Mathena, and his wife Patricia, initiated the process of moving the student center from aspiration to reality, by donating a $7 million lead gift toward funding the facility.

In his comments, Mathena explained that the entirety of the student center project is likened to the work of Nehemiah in Old Testament times. He said there needed to be a leader with a plan, workers, those burdened for the cause, and much prayer.

“One of the greatest privileges of my life has been being able to do some small task for our Lord, and I know this is your testimony as well, and I thank God that he is able to use us to accomplish great things for him,” Mathena said. “We celebrate together what we are accomplishing in this matter of building this student center.”

The two-story facility the Mathena Student Center will house a cafeteria, bookstore and café, recreation areas for family use, a collegiate-sized gymnasium, a walking track, racquetball courts, fitness rooms, as well as conference rooms and staff offices.

Construction on the complex is scheduled to be completed in 2018.

During his President’s Report, Allen announced to the board record enrollment for spring semester and discussed the operating budget planned for the next year.

In presenting the institution’s spring semester enrollment, he explained that both headcount and hours sold had reached record levels.

Also, in presenting to the board the coming year’s budget of more than $18 million, Allen noted that the aim of the institution’s business model is to properly steward the finances provided by God, as provided through the SBC’s Cooperative Program and other revenue streams.

In other news, Allen reported the appointment of Jeff Kwok to serve as director of Midwestern Seminary’s Chinese Studies program and to teach on the faculty as assistant professor of ministry. Originally from Hong Kong, Kwok comes to Kansas City after serving for a number of years with the International Mission Board. He also served for more than 20 years as a pastor in Canada and the United States.

Additionally, with nominations coming from the Governance Committee, the Board elected its 2017-18 officers. Ken Parker, pastor of First Baptist, Kearney, was elected as chairman; John Mathena, a businessman from Edmond, Okla., was named first vice chairman; Lee Roberson, a businessman from Hobbs, N.M., will be second vice chairman; and Ben Character, an educator from Oxford, Ala., was re-elected as secretary.

Midwestern Seminary’s Board of Trustees meets biannually in October and April.