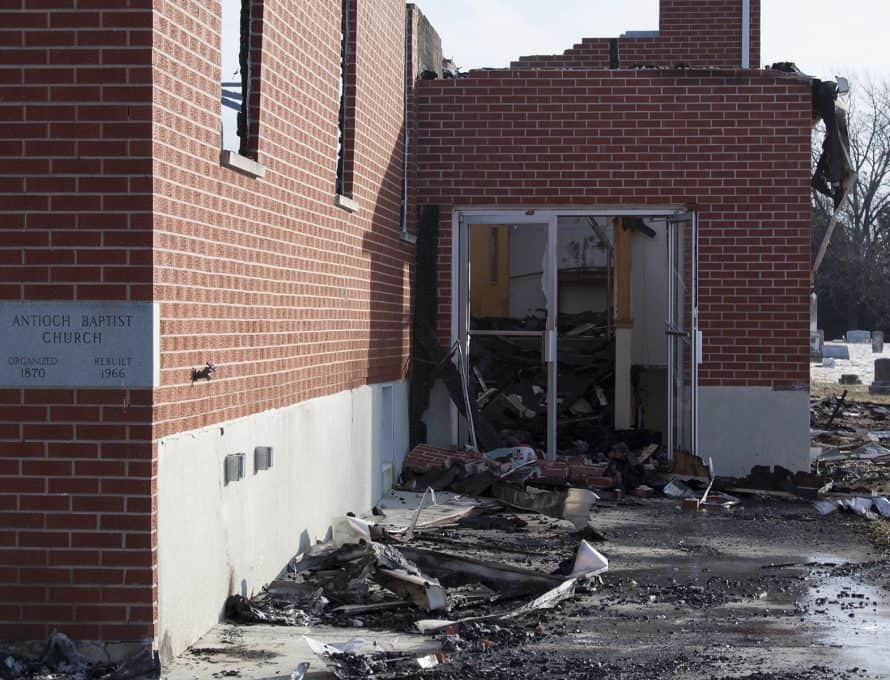 HANNIBAL – Although a fire destroyed their church during the Christmas season, Antioch Baptist Church—founded here in 1870—still worshipped their Savior during the holidays. Photo by Becky Turner

HANNIBAL – A fire that destroyed the Antioch Baptist church in rural Hannibal five days before Christmas didn’t keep the congregation from celebrating the birth of Jesus.

Pastor Jack Emmite reported that for Christmas Sunday “we had a full house, a lot of our own and outside visitors” who worshiped at Smith Funeral Chapel in Hannibal.

While the members were heartsick about the fire Dec. 20, Rev. Jack Emmite, the pastor for almost 25 years, was resolute: “We are going to move forward. We will rebuild,” he said the day after the fire.

Moving forward will not necessarily be a quick process. As of late December the church was still meeting with insurance officials, and making the earliest of plans of razing the burned shell of the church, and deciding on some place where the congregation can regularly meet. Long range will be a discussion of replacing the structure.

Many local churches and Hannibal-LaGrange University also offered facilities for the church in addition to the funeral home. For the New Year’s Day service, they met in a Seventh Day Adventist church, although it was smaller and some Sunday School classes were combined.

“It’s difficult to find the right spot where we don’t interfere with other churches and we’d like to keep our same schedule. Our location is not yet solidified.”

“We are so grateful for the godly folks who have offered prayers, encouragement, and facilities,” Emmite said.

A Missouri state fire marshal and a deputy sheriff were on scene Dec. 21. Cause has not yet been determined, but Emmite said it appears to have started in the back of the church, in the basement. Part of a rear wall collapsed in the fire, breaking at least one tombstone of the church cemetery.

The church serves some 70 members and many of them were at the scene of the fire and in the following days to comfort each other and take their own pictures.

There were no injuries or fatalities, and only an older chair and a small table were salvaged.

Emmite recalled members have had baptisms and weddings and other events in the church established in 1870, bringing emotional pain.

“There were a lot of tears (of members) some had grown up in here and live close by. Even non-members who used to be here came out and offered encouragement. People were heartbroken.”

“We say it’s just a building, now we have to prove it,” said Deacon Don White.

Emmite concurred: “The community will be watching us.”

Emmite had conducted hospital chaplain visits earlier Tuesday and came to the church about 2 p.m. to check the mail. He left a few minutes later and locked the door,

A neighbor who called 911 also called Emmite to tell him of the fire, reported at mid-afternoon Tuesday. The fire soon engulfed the structure and the roof eventually collapsed into the sanctuary and then the basement.

“No matter what. We still give praise to our Lord,” Emmite said.

Another fire occurred in the church about 10 years ago, stemming from a propane leak that caused mainly smoke damage and burned a little carpet on some stairs.

“There are so many needs to continue on. We covet the prayers of Missouri Baptists,” Emmite said.