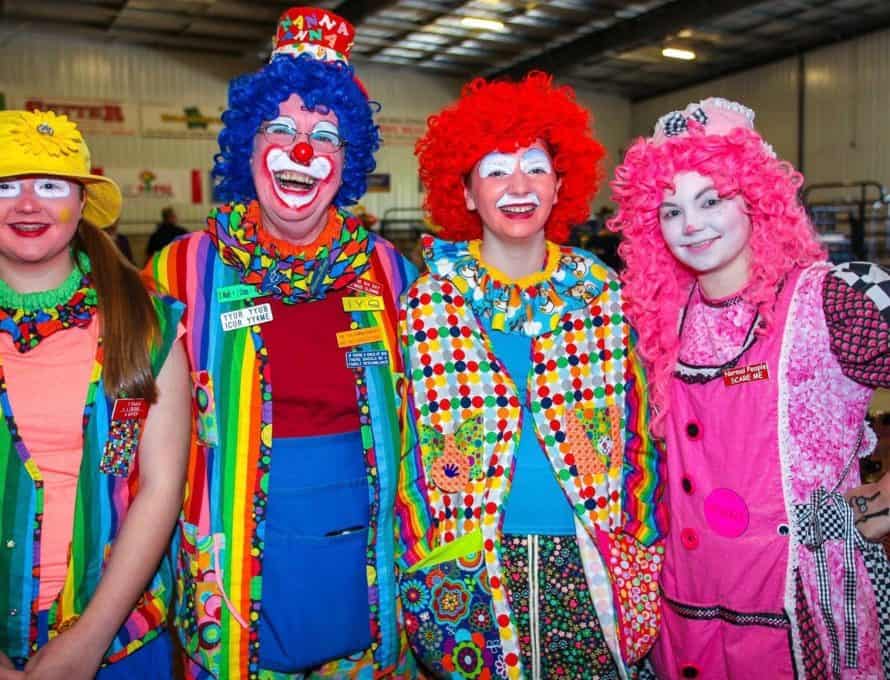 HANNIBAL – For over 23 years, Charlotte Parrish has not been herself. Instead, she is clown “Nanna Anna,” and she shares Jesus.

Parrish of Calvary Baptist, Hannibal, has been a practicing clown since 1993.

“I went to clown school to learn to do children’s ministry better. Now I just do clowning,” Parrish said.

She and another lady formed the Isaac Clown Troupe. When both ladies moved to different churches, Parrish adapted the JOY Clown Troupe name. Joy is an acronym for ‘Jesus, Others, Yourself,” but also is one of the gifts of the Spirit.

Eight regulars, aged 13-92 and including two teenagers, comprise JOY Clown Troupe. Others are occasional clowns. Most are Southern Baptists, but two who are with a Christian church. One Troupe member is a former high school teacher of Parrish, whom Parrish once saw as a serious teacher.

As a clown she does various programs with illusions, balloon animals/creations, skits, and gospel presentations.

Most events are festivals, parades, and fairs in Northeast Missouri, but she has entertained in Quincy Illinois, Ferguson MO after the unrest, and even on mission trips to Nicaragua, Honduras, El Salvador, and Mexico.

Parrish, a retired state Department of Health and Human Services employee said one exciting event was a 2013 two-week Nicaraguan trip. It included moving at night from a school to a village to find housing and a sudden day call from a school principal to entertain 24 school children banned from the village.

“I was there maybe an hour and when it came time to ask who wanted Jesus into their heart, all 24 hands went up. I don’t know if all 24 are Christians, but the interpreter sat with each of them and got their names to give to a local pastor.”

She is unabashed in sharing Jesus while clowning, and has had invitations rescinded when she makes that a stipulation.

“I want to be upfront. I clown for Jesus,” she said. “The more you can intertwine Jesus through the program and the more you can get the kids to interact, the better off you are.”

On a more recent trip to Nicaragua, she was told to wear long pants, long shirts, and a hat to fight mosquitos possibly infected with the Zika virus.

The denist she assisted agreed. She was given crowd control duties. During a lunch break, she guarded the medical equipment and medicines by entertaining children for 45 minutes without speaking Spanish, using skits and illusions as she could.

Once while using a witnessing bracelet at the Lewis County Missouri fair, two people, one from California state and one from Quincy, Illinois, asked to receive Jesus.

“I love to clown. I love to talk about Jesus,” Parrish said.