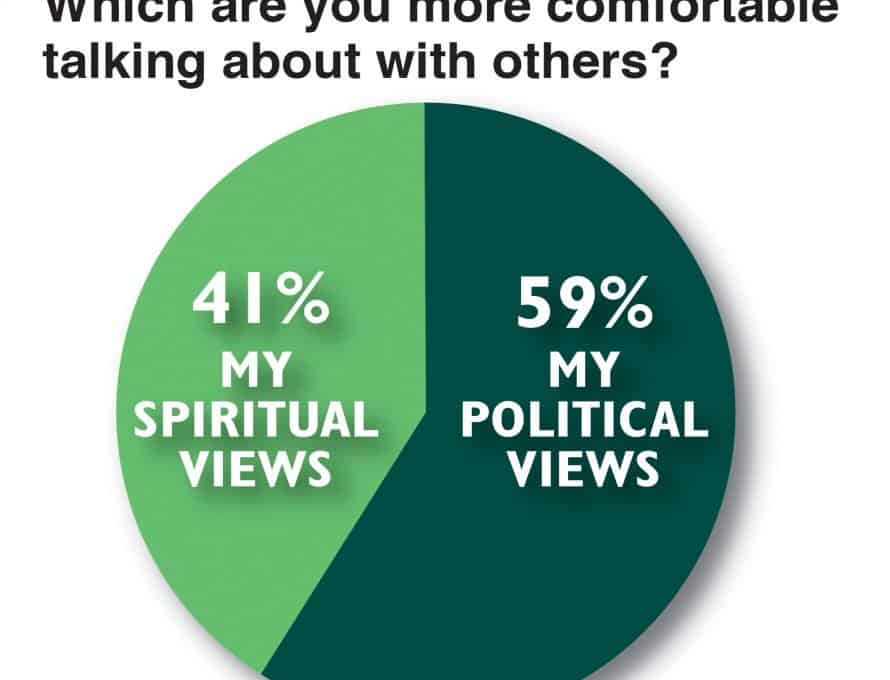 NASHVILLE, Tenn. — Politics trumps God for most Americans when it comes to conversations with their friends.

Six in 10 Americans are more comfortable talking about politics than their spiritual beliefs. And most say they aren’t interested in having more spiritual conversations.

By contrast, evangelical Christians prefer talking about God over politics by a 2-to-1 margin.

Those are among the findings of an online survey of 1,004 Americans about their views on spirituality and politics from Nashville-based LifeWay Research.

As part of the survey, researchers compared how often Americans talk to others about politics to the number of times they talk about spirituality.

By contrast, fewer than half (44 percent) had three or more spiritual conversations in the same time frame. Twenty-two percent had no conversations about spirituality.

Overall, 6 in 10 Americans (59 percent) say they’re more comfortable discussing their political views than their spiritual beliefs. But there are distinctions among certain groups.

Most Americans also say they have about as many conversations about spirituality as they can handle.

About half (51 percent) say they have “just the right amount” of discussions on spiritual beliefs. A quarter (23 percent) want fewer spiritual discussions. Only 1 in 5 wants more. Six percent aren’t sure.