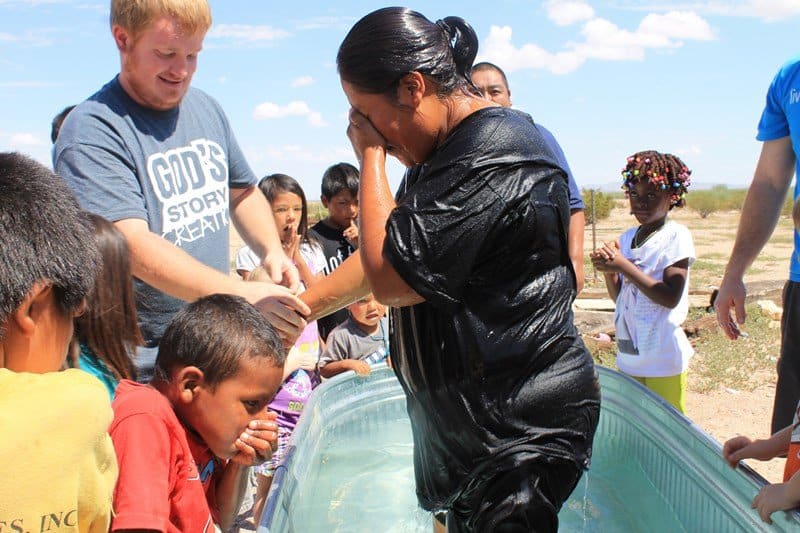 SACATON, Ariz. (BP) – As soon as Eric Gibbs stepped onto the Tohono O’odham Nation, one of the largest Native American reservations in the country, he felt a love for the people there.

“After seeing the needs of that community, I knew my time in Arizona would be more than just a week,” Gibbs said of the short-term mission trip he took as a college student, a trip he didn’t think much about beforehand.

Gibbs returned home to finish his degree and continue his service as a youth minister. But he and his wife Brittany began to pray about relocating to Arizona for long-term ministry.

Brittany said she and Eric “always thought that we would take mission trips with our churches and lead mission trips with youth but never thought much about being ‘missionaries.’ Over and over again, [God] has made it known that this is His will.”

After graduation from college, Eric and Brittany were accepted as church planters through the Mission Service Corps of the North American Mission Board. In 2010, the young couple moved with their two children to Sacaton, Ariz., a town of about 1,500, and settled into a reservation near the Gila River to begin a ministry among Native Americans.

“I feel called to pastor forgotten people groups,” Gibbs said. “This kind of calling often leads to planting churches in places that can be rather closed off.”

Gibbs is pastor of First Pima Baptist Church in the Gila River Reservation and also works with two church plants on local reservations, including one in the Tohono O’odham Nation, which saw 16 baptisms last year. In addition, Gibbs serves as regional director for Ethné Global Services, a nonprofit organization initiated by Alan Karr, a professor of church planting at Golden Gate Baptist Theological Seminary, to work with African refugees in Phoenix, many of whom are from the Congo.

The Gibbs’ calling has dramatically changed the family. In addition to the two children they brought to Arizona, Eric and Brittany have adopted a daughter from the Republic of Congo, adopted two Native American sons and brought in foster children from local reservations. They are certified foster parents by Tribal Social Services, one of the few local couples with that distinction. The children have allowed the family to build relationships with both the African and the Indian communities.

Gibbs said they are simply “living on purpose” as they continue to seek God’s will for their lives.

“We are an ordinary family that God has called to carry out an extraordinary mission,” he said. “We are missionaries called to live and serve among the Native American tribes in Arizona. God has also called our family to adopt.”

Another significant step was to enroll for classes at the Arizona Campus of Golden Gate Seminary.

“I knew Golden Gate had a campus in Arizona when I moved out here, but I didn’t think it would be possible for me to attend,” Gibbs said. “But I was connected with scholarships that allowed me to study without a financial burden and to finish without taking any breaks.”

He completed the master of missiology degree in 2015 and was awarded the Golden Gate Church Planting Award.

“I feel like I am a better leader, pastor, husband, father because of my time at Golden Gate,” Gibbs said.

“I didn’t know how much I didn’t know,” he said of how his studies strengthened his calling “to relate to and minister to other cultures.”