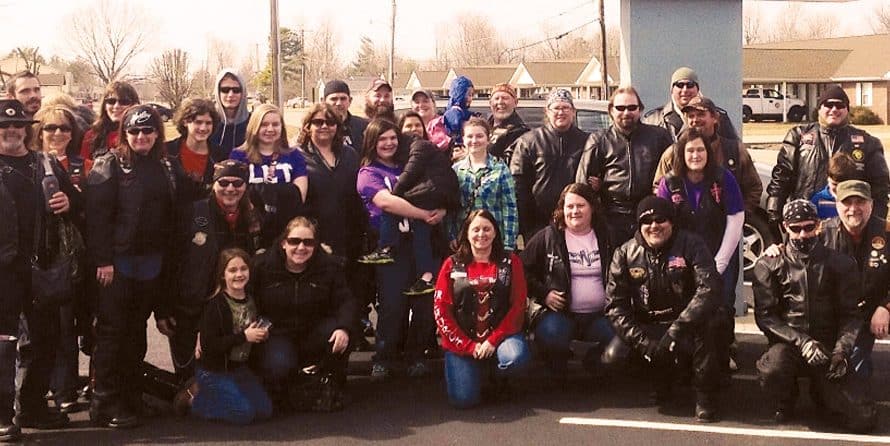 CAPE GIRARDEAU -- Members of Rock-N-Roll Church gather for a group photo. The church, whose website declares, “This ain’t your grandma’s church,” labors to reach those for Christ who are drawn to motorcycles and loud music. Photo courtesy of Rock-n-Roll Church.

CAPE GIRARDEAU — The Rock-N-Roll Church of Cape Girardeau freely admits it is different. A tagline on the church website reads: “This ain’t your grandma’s church.”

It’s a church where rock and roll music is prevalent, and motorcycles, especially Harley-Davidsons are common.

On Sundays, the church praise and worship band Stronghold plays Christian rock songs. At other times and events, they play secular rock and roll music.

“Jesus is the rock of our salvation. Roll means the church is on the move,” Garner said.

‘On the move’ means ministering at biker events. ‘On the move’ also indicates their location. The church has no home, per se. They usually meet on Sundays at a restaurant called Dockside surrounded by bars on Spanish Street in Cape Girardeau.

He said the term Rock and Roll has its roots in Christian music, specifically black gospel music in the 1800s, but got a derogatory connotation in the 1950s.

Rock-N-Roll church averages 80 on Sunday mornings. On certain days – Easter, for example, where the service is held at a Harley-Davidson dealership, the crowd may number 200 people.

“We set up among the (showroom) bikes,” Garner said of the Easter services.

Rock-N-Roll church began six and a half years ago with Saturday services, with Garner saying the church competed with the bar scene for people, until that building was sold. Then they moved to an adjacent building, called the Dockside.

Among the church ministries, Stronghold plays at a lot of festivals and recently took a third place in the Heartland Classic Rock band competition. Garner said,  “They are very good at what they do.”

Other ministries include “in the wind” bike rallies and bike rides for special causes; regular participation in the Red Star food pantry; art exhibits at a banquet hall; being involved in transitional ministries for ex-prisoners back into society; and KICKS – Kids In Christian Karate School.

Garner is a trained MBC church planter, but admits he is doing non-traditional church planting.

“We believe it is not about stopping something, but starting something,” Garner said of church planting.  “Their lives are being changed. We minister to people in the cracks, on crack, and full of cracks.”

They are working with a church plant – Herrin (Ill.) House of Hope and have started a Sikeston Bible study in a central location to reach several smaller towns.

Although Garner said the baptism numbers are down this year, in past years they have baptized 30 to 40 annually. The baptisms are an unconventional celebration.

“We have a portable baptistry. We haul it out in front of the store on the second Sunday of each month. When I have them in the water to dunk them, the others rev their motorcycles, so much so it vibrates the water and shakes the windows at the Lutheran church three blocks away. It’s the same (celebration) with older and younger people we baptize,” Garner said.

Garner said his office is his Harley. “I ride it everywhere. We have a motorcycle ministry to the biking community at large.”