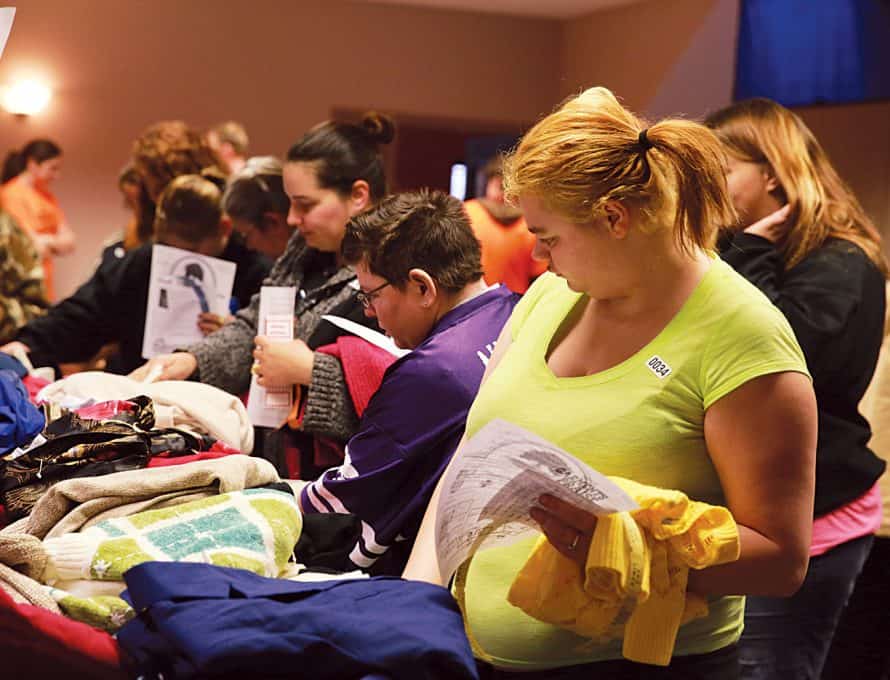 KANSAS CITY – People in Kansas City have tossed away sin’s rags to put on the new clothing of righteousness found in Christ Jesus because of Garments of Praise, an area ministry that provides clothes for the needy.

The ministry’s theme verse, Isaiah 61:3, talks of people exchanging an old life for new attire, and this is what those who serve with the ministry hope to see continually. During five road events held in roughly two years, Garments of Praise has distributed more than 54,000 clothing articles to more than 2,000 people. During these events, 97 people professed faith in Christ.

“Since day one, the Lord has kicked open the doors,” said Mark Scribner, president of disribution and assistance, which oversees Garments of Praise.

Scribner was a Kansas church staffer when a party at Concord Baptist, Jefferson City, directed him to a Kansas City contact with new clothing to give away.

“I understood there were 14 boxes of clothes. I was thinking bankers boxes (12x12x20 inches). I either didn’t hear right or it grew exponentially. There were 54 Gaylord pallet boxes (36x36x48 inches). Each box had 600-1200 clothing items, depending on the season and size of the clothes. The company said to remove the tags so people wouldn’t return the clothes for cash. I said, ‘We could do this at our warehouse,’ knowing full well we didn’t have a warehouse.

“I told my banker who foreclosed on two warehouses that I needed one of them. A semi-truck holds 26 pallets, so we had more than two full trucks. Clothing was sorted by type, gender (mainly women’s), and size.

The day before the Harrison event, a man brought his wife in a wheelchair to speak with Scribner.

“This woman, probably in her 70s, didn’t know her size. My mom helped her shop. The woman probably had never owned new clothes before in her life,” Scribner said.

At another event, tattooed Jimmy came and was invited to a church service. Jimmy thought his tattoos would exclude him. Sponsoring church member Robin offered to sit with him, and he came on Sunday. The second Sunday, he brought his girlfriend, Nicole, and got saved. Afterward, he realized that he and his girlfriend shouldn’t live together out of wedlock. Two days later, on a Tuesday, they married. The next week they got baptized. In February, Robin—then Nicole’s birth coach—sent a picture of her holding their baby.

Still at another event, a woman sought a handout from a motel. They declined, but the manager, who gave staff time off to get clothing, directed her to the church clothing giveaway. The woman in need got clothes, got saved, changed clothes, went for an interview, and was hired.

“We love to see lives changed,” Scribner said. “God is all about changed lives.”

Scribner would like to partner with groups that can help sort clothes and with churches within a five-hour radius of Kansas City that can host giveaway events.

“The clothes are plentiful, but the workers, the churches are few,” Scribner said.

For more information about partnering with Garments of Praise, contact Scribner at 913.416.9598 or at mark@d-n-a.org.