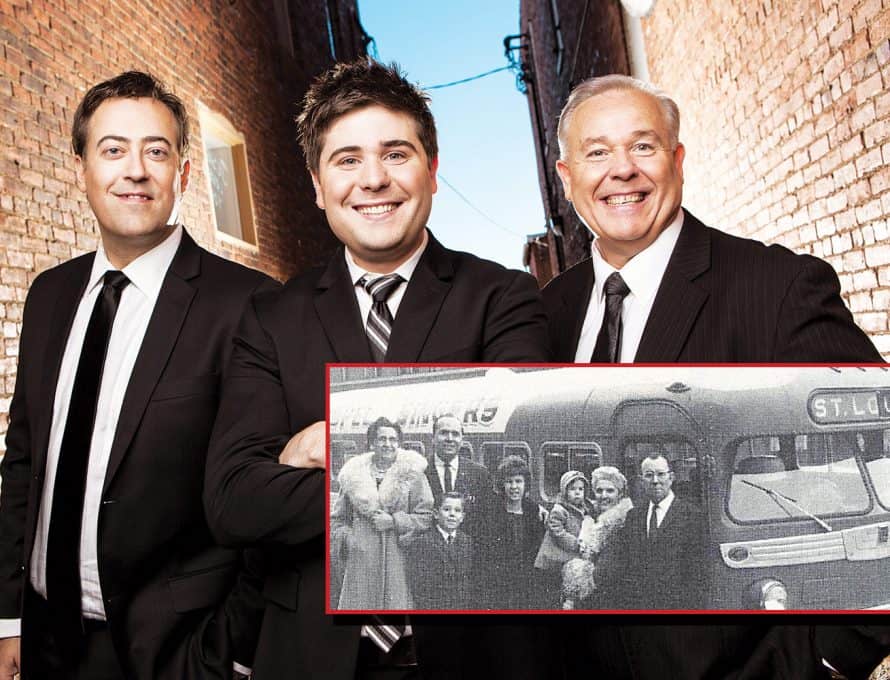 ST. LOUIS – MAIN PHOTO: The current group of The Lesters is, from left Matt Felts, Jonathan Lester, Brian Lester. Jonathan and Brian are fourth and third generation performers respectively. INSET PHOTO: This photo from around 1959 shows at left second generation Lesters Alene and Herschel, third generation family members Brian, Donna, and Ginger, and the matriarch and patriarch “Bobo” and Harvey Lester. It was their first tour bus and the photo was taken in front of the family music store on 39th Street in St. Louis.

ST. LOUIS – One might think after 90 years it would be time to stop. But for the Lester Family of St. Louis, stopping isn’t an option.

This is the 90th year the family has performed Christian concerts and recorded gospel albums. The Lesters may be the longest continuous running music group of any genre, anywhere in the world—although this has not yet been confirmed by the Guinness Book of World Records—according to Brian Lester, 62, a third generation performer and the group’s manager.

“I always knew in my heart this was what I was supposed to do. My heart’s desire has always been to sing gospel music. (God) has placed me here,” he said.

Through the years, the Lesters have recorded no less than 85 albums.

Many people automatically attach the Lesters with Meramec Caverns near Stanton. The Lesters recently performed their 49th Easter passion play there and later this year will have their 48th fall festival in the natural ballroom of the Cavern, which seats more than 2,000 people.

Harvey and Opal Lester married and started the family ministry in 1925 in St. Louis, a year after meeting at a revival in 1924 at Dry Bayou Baptist Church in Hayti, MO, where Opal played the pump organ. The Lesters also opened a music store that ran for over 60 years and offered music lessons.

In the 1920s and 1930s, they were the Lester Family quartet. Performances included street meetings and at least two St. Louis area missions. They also worked with the Salvation Army.

“In the days before TV, people lived for this. They’d take guests with them to concerts, and if they played an instrument, they put them on stage with them. Even today, I’ll run into senior citizens who recall playing with my family (on stage). We went for the love of sharing the gospel,” Brian said.

Brian’s parents, Herschel and Alene, took over the music ministry when Herschel returned to the states after World War II.

Brian traveled as a baby with the Lester family, and took over the management in the 1970s. Brian’s sister Donna gave piano lessons; over all, the Lesters have taught music to no less than 27 pastors, evangelists and missionaries. Another sister, Ginger, has done arranging for the group. At various times, the sibling’s children and grandchildren have been a part of the Lesters performances.

The current Lesters include Brian, who sings mostly lead; Jonathan, the fourth generation singer and of whom Brian calls “a man’s alto with a huge range of voice”; and Matt Felts, who grew up just a few miles from the Lesters and now “commutes” from Nashville, Tenn.

“When I was younger, it was nothing to do 200-225 concerts a year. This year we’ll do 178-185. Along the way, we have to use good godly sense. It’s important to have a family life and to stay physically, mentally, and spiritually strong,” Brian said, adding he sees the group eventually doing 100-125 concerts a year.

While decreasing the number of concerts on the road has been good in helping the family avoid burnout, this decrease also poses a challenge for the Lesters.

“A number of doors have closed for whatever reason,” Brian said. “A lot of them have to do with the music. A lot have to do with finances. A lot of churches don’t have Sunday night services. We used to do a Sunday morning service in one church, then a Sunday evening service in another church. Usually now, we just are part of one service somewhere.”

Through the years, the Lesters have gone from a 7-8 person groups complete with vocalists, a pianist a bass and guitar player. Since the early 1990s it is mainly a vocal band. Duane Garren schedules The Lesters, but also serves as the group’s bus driver and soundman.

The Lesters have performed in all U.S. states except Alaska. Internationally, they’ve performed in at least a half-dozen countries, including two short mission trips to India, one that Brian said was a key role in Jonathan’s heart opening to the ministry.

Brian Lester said without question, the most requested song is, “He Didn’t Throw the Clay Away,” written circa 1987 by Gene Reasoner of Ozark.

“God has us here for a purpose, to carry the message of Jesus Christ,” Brian Lester said. “I feel very honored, very blessed.”