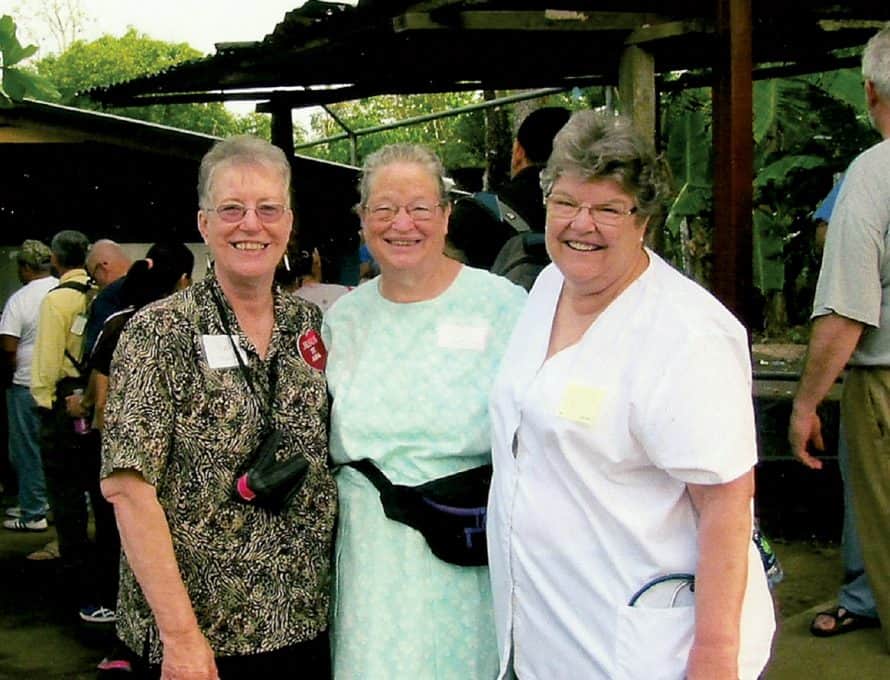 NICARAGUA – Missourians Charlotte Parrish, Grace Horst, and Kelly Stevenson pose in Nicaragua, where the three spent a week in February on a medical mission trip. Parrish and Stevenson are members of Calvary Baptist in Hannibal.

Charlotte Parrish and Kelly Stevenson of Calvary, and Grace Horst, a Mennonite from Edina, were among the 67 members on the team, not counting interpreters and medical professionals.

The Mississippi-based Baptist Medical-Dental Missions (BMBMI) organization sends 40 teams to Nicaragua and 100 to Honduras each year. Plans are being made to send teams to Peru, Guatemala, and African countries.

This was Parrish’s sixth trip to the country and Stevenson’s second. Both ladies said a love for the Nicaraguan people are what keeps them going back.

Parrish, who usually does clowning and street evangelism, served this year as a dental assistant – holding a flashlight for tooth extractions and sterilizing equipment between patients.

“I had never had a tooth pulled, and I was holding a flashlight for the dentist,” Parrish said. “But it was very rewarding. Several people, after having teeth pulled, hugged me and said ‘gracias,’” the Spanish term for “thank you.”

Stevenson, an RN, served in a medical clinic, treating minor conditions. She helped treat people for parasites common in Nicaragua, and she triaged those needing advanced care.

She did give out a few stuffed animals and made a few balloon animals for children.

Stevenson said one man with corneal abrasions was referred to a hospital in the capital city of Managua. The mission team had funds to pay for the man’s care.

“This organization is very focused on holding evangelical meetings. We tried the best we could to incorporate that in the care we gave in the clinic. You bring the gospel in, but you meet the physical needs,” Stevenson said.

One baby had a 105-degree fever, and the baby was taken to a hospital. The baby improved, the father accepted Jesus Christ as savior, and the mother rededicated her life to Christ.

During the mission trip, breakfast was served at 5 a.m. and devotions were held at 6 a.m., followed by evangelistic services for children, youth, and adults. Participants at the morning services were then given cards to come to the clinics by walking or riding horses.

Stevenson saw about 175 of the patients each of the first three days.

The teams also distributed $2,000 of beans and rice and gave $15,000 for church construction supplies and work on a pastor’s homes.