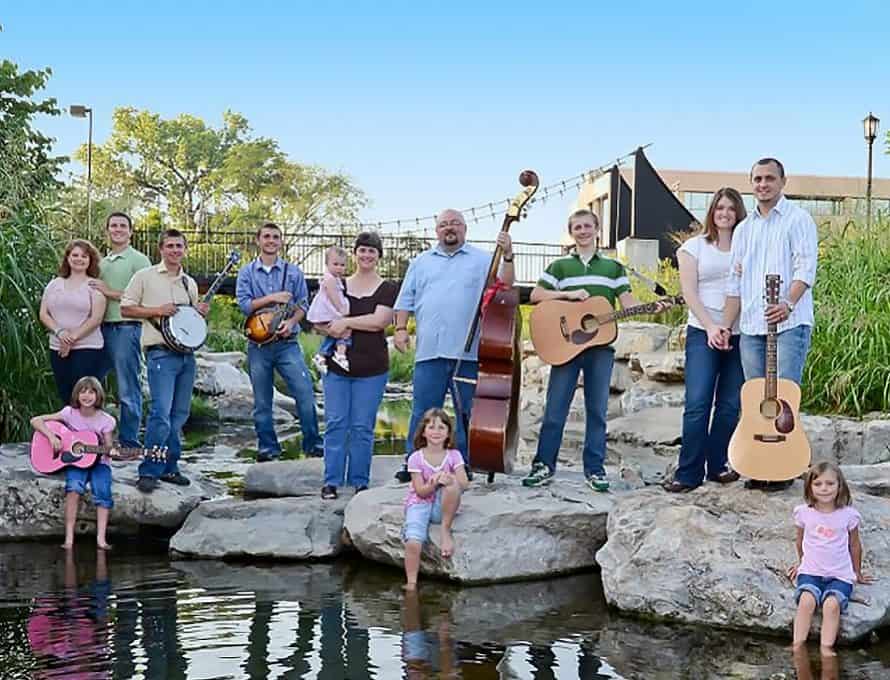 CLARK – Following God in ministry means sometimes a change of focus. This is a lesson Chris and Susan Canote and their 10 children continue to learn.

More than a dozen years ago, the couple performed southern gospel music for a revival pastor. As children were added to the family and grew – now between the ages of 2 and 26 – they joined the music team, singing and playing the guitar or mandolin. Chris then bought an upright bass.

“We are a bluegrass band in central Missouri. We’ve done music for everything – funerals, weddings, and festivals named after furry rodents or vegetables,” Canote said.

Mexico mission trips began when they were in a camp in Lawrence Kansas in 2003 and a bus driver was needed for a trip to Mexico. Canote, who drives a Harrisburg school bus, agreed to go.

Evident Ministries now takes two annual mission trips to Acuña, Mexico, near Del Rio, Texas, in July and again around Christmas time. They love to include mission teams from five to 45 members with the family.

“It was like a big shiny lure to me to go to Mexico. I was blind-sided (by the mission opportunity). I didn’t envision it,” Canote said.

Whether music or missions, the emphasis is always salvation through Jesus Christ alone.

“People need to share the good news of Jesus, but don’t know how to do it,” he said. “We have the resources, and we share the good news of Jesus. We partner each team with a pastor for various projects and have daily chapel at a camp. Projects include children’s ministry (such as VBS and backyard Bible clubs), sports ministries, women’s ministries and crafts, and we’re always looking out for construction teams. We’re very much evangelism based.

“If we do what we can to meet physical needs (without evangelism), people can still go to Hell with a full belly. That’s why we preach Jesus.

“The trips include everything we do in Mid-Missouri,” he added. “We’ve already booked for our July, 2015 mission trip, and it includes four Mennonite teams from Canada and an all-Chinese team from Dallas, Texas. There will be about 100 of us.

“Basically, staff is our family and maybe one or two volunteers.”

God works in incredible ways with the family’s ministries. Once, the family motorhome developed transmission problems in the middle of a Mexican desert. Fortunately, an Alabama volunteer who knew about transmission work served on that particular mission team and was able to get the motorhome going again.

“While my son and I were on our back (with the transmission problems), I said, and have said many times, ‘Look at us. We’re on a wild adventure in Mexico.’”

Safety has never been a problem, he added. “We’re never safer than where God puts us.”

Although they do musical performances, as the kids have grown, their schedules have changed. Some of the children even formed their own praise band, “Fully Persuaded.” The oldest two children are married; the next oldest two are engaged and planning weddings. All the family participates in some form – the grown children are in the food and music ministry at the camp. Their oldest son is on the board of directors and serves as a worship leader in his church.

The Canotes formerly ran the 1950s era Doghouse Diner, which was their “training ground” for feeding a mission team, when they learned to trust God for their needs.

They hope to do a holiday concert as they have done in the past, but as of early November, nothing was booked.

“We want to duplicate what we are doing in Mexico in Missouri. We want to help revitalize Missouri rural churches to get young people to put legs to their faith,” Canote said. “In this ministry, some people may not be ready to go to third world countries, but they are willing to go down the road.”

A strategic partner pastor from Mexico will also fly to central Missouri for a six-stop, two day visit talking about what Evident Ministries and his ministry are doing.

“I love to talk about how God works in us and through us,” Canote said. “We get our socks blessed off every day.”

To contact or learn more about the Canote family, visit www.thecanotefamily.com.