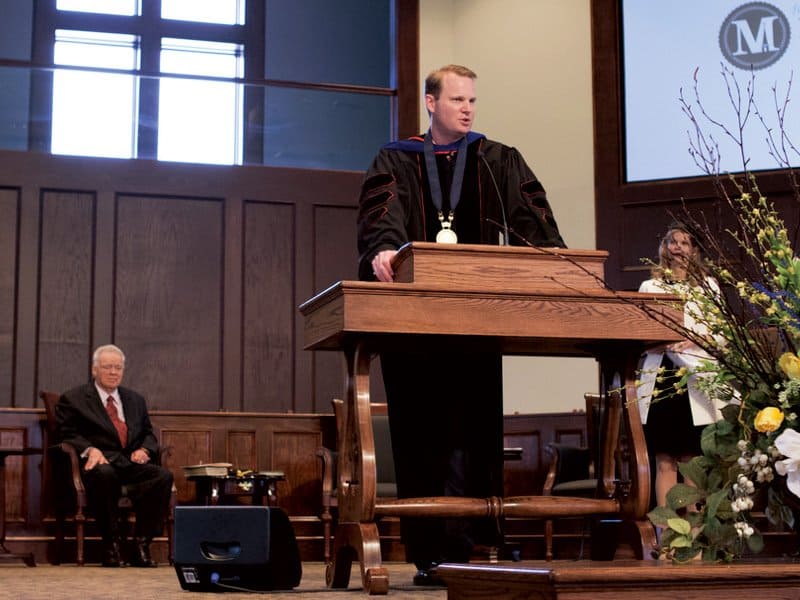 The seminary’s spring enrollment rose by the highest percentage in the school’s history, 7 percent, Midwestern President Jason K. Allen told trustees, adding that budgetary cost savings during the past year will allow the seminary to avoid a tuition increase next year.

“Our determination is to make top-notch theological education as accessible and affordable as possible for our students,” Allen told trustees April 15. “Therefore, we are thrilled to announce we are holding tuition and fees flat for the 2014-15 academic year.”

In a dedication service, the Daniel Lee Chapel was named in honor of Daniel Lee, founder and pastor emeritus of South Korea’s Global Mission Church, which provided significant financial support during the fundraising process. Trustees and others praised God for allowing the chapel to be dedicated debt free, the result of a generous gift from a longtime seminary friend, former trustee and Oklahoma City businessman Gene Downing and his wife, Jo.

Allen described the provision as a reminder of God’s continued blessing on the institution, and thanked the Downings for their generosity.

The ceremony featured all living previous presidents of Midwestern Seminary, who were in attendance and participated in key roles during the service.

“It was a personal joy to welcome back to campus Drs. [Milton] Ferguson, [Mark] Coppenger, and [Phil] Roberts, to celebrate their tenures at Midwestern Seminary and to have them participate in the chapel dedication service,” Allen said.

Paige Patterson, president of Southwestern Baptist Theological Seminary, presented the chapel message on the inerrancy of Scripture from Matt. 22.

“I thank God for this seminary,” Patterson said. “I thank God for its president. And dear students gathered today, may I say to you, that you are the hope of the future.

“You must be the light of this age … yours is the responsibility to take this priceless and precious Word of God and instill it in the heart of hopeless, helpless men and women who need desperately to know a Savior,” he said. “As you present Him, you can present it knowing that it is true.”

Trustees announced in their business meeting the expansion and enhancement of the seminary’s doctor of philosophy in biblical studies degree with five new emphases, including biblical theology, biblical ethics, biblical missiology, biblical ministry and biblical preaching.

“The enhanced Ph.D. in biblical studies makes studying at Midwestern affordable and attainable for the pastor-theologian seeking to advance his ministry without relocating,” Rodney Harrison, vice president for institutional effectiveness and director of doctoral studies, said.

“I am so very pleased to announce the expansion of the academic program to include these five important emphases,” Allen said. “It is a sign of Midwestern Seminary’s expanding academic footprint, and our commitment to train pastors, ministers and evangelists for the church.”

Trustees elected Thorvald Madsen as Midwestern’s graduate dean, a position he’d held in an interim capacity since the summer of 2013.

“I am deeply thankful to have Dr. Thor Madsen serving as graduate dean of Midwestern Seminary,” Allen said. “He is a proven academician, gifted scholar, and one who is well-respected by our faculty and throughout the broader Southern Baptist Convention.”

In other business, trustees voted to maintain all current board officers, with the exception of secretary, Judy Crain, who rotated off the board after 12 years. Bill Bowyer, pastor of Wake Crossroads Baptist Church in Raleigh, N.C., was elected trustee board secretary.