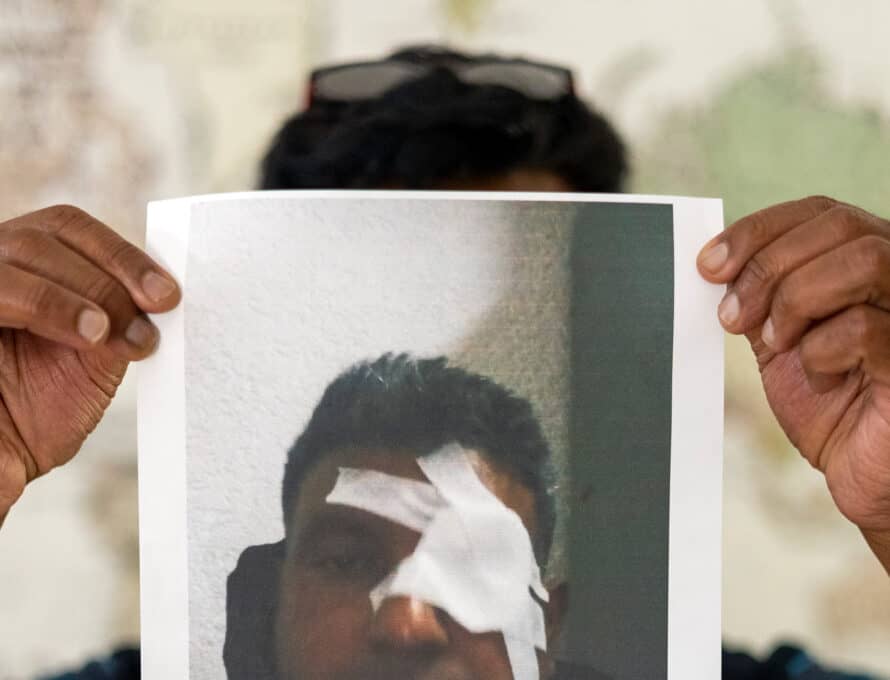 Pictures reveal the beating Aftab received in a refugee camp by others who were displeased that he spoke openly about his faith and the unfair treatment of Christians in his home country. (IMB Photo)

SBC Day of Prayer for the Persecuted Church set for Nov. 6

Nights are the hardest. Really, anytime he’s alone in the apartment is hard. He’d much rather be with people or be busy at work. Time alone reminds him of his family – his wife, daughter and two sons. He hasn’t seen them in person in nine years. He blinks back tears when he talks about them.

When Aftab fled his home country, he thought he’d only be gone for a few weeks, possibly months. He can hardly imagine that it’s been this long. He can’t believe the journey he’s taken. Still, he remains amazed at God’s protection and faithfulness.

Daily life remains difficult as a refugee, but he no longer faces danger. He has a government-subsidized apartment he shares with two other refugees. He has work in a fish factory. He has friends. His faith is growing, and he seizes every opportunity to share the gospel. Still, it’s lonely as he continues to wade through the legal processes that will bring his family to him.

One of his closest friends is IMB missionary Ian Gibson. The friendship between the two is evidenced by the comfort Aftab feels with Ian and his family. He often joins them for meals and enjoys cooking for them. For Aftab’s birthday, the Gibsons took him rock climbing. It’s a friendship of followers of Christ who share a common purpose to spread the good news.

But Aftab’s background is much different from Ian’s upbringing in Georgia.

Though his was not always an easy life, Aftab was born into a Christian family, received a good education, married a Christian woman, had three children and a good job. He had Muslim friends and Christian friends. He felt like he was well respected.

He faced the mistreatment of Christians common in his region, but he grew up used to it. Sadly, this is the circumstance that many are born into.

But in adulthood, he noticed very overt persecution, costing the homes and lives ofChristians. He protested, peacefully and legally. He knew he was within his rights to do so.

But the local government didn’t intervene when Aftab was accused of blasphemy, a crime that often results in execution, especially for Christians. Warned by a friend to leave immediately, Aftab fled on foot for his country’s border. He thought that the accusations against him would settle. He thought that Muslim friends and people he knew in the local government would come to his aid.

No one would help him.

Facing death threats, Aftab began a grueling journey away from his home country, away from his family. He walked for miles, for weeks, on rough roads and across steep mountains. Others were also fleeing the country and sometimes they would hike together. Aftab said at one point, he was too weak to even carry a small plastic bag with personal items. They were all hungry and hopeless.

“God, save me. Help me,” Aftab remembers continually praying.

At one point, his family drained their bank accounts to hire human smugglers to carry Aftab across borders. Sometimes Aftab arrived where he wanted to go. One time, the smugglers took his money and fled. Always the journeys required long hours, even days, crouched in a shipping container with no food or water. A journey across water almost cost his life as a heavy pack pulled him under while he hung by his fingertips to a life raft.

Aftab finally settled in a European refugee camp. There he met a Christian who works with refugees. He was introduced to a new faith community and encouraged to seek God with renewed hope.

“The Christians there were very serious about their faith. They helped me to see that I could still live for God,” Aftab says.

Aftab describes his time in this country with great fondness. He saw the gospel openly shared – something he had never witnessed in his home country. His own faith was strengthened, and he started to tell others what it meant to follow Jesus. In his time there, he baptized 30 new believers.

“After this accusation of blasphemy,” Ian shares, “Aftab fled his home city and really began to grow in his faith as he journeyed across Europe. He saw other believers, the international body of Christ, show him love and encourage him.”

Ian continues, “He got to see God work in very miraculous ways … and see how faith in Christ is more of a trust and a faith than it is just a name that he had for many years.”

God showed Aftab purpose in his suffering. Aftab explains that back home he knew he was a Christian, but he focused on working and providing for his family more than following Jesus. But when the heavy persecution started and he had suffered many years, he became solely focused on Jesus and spreading the hope of the gospel.

“I can say thank you to the Muslims,” Aftab says. “This is God’s plan. So much was taken away from me, but I have received so many blessings.”

In spite of having a strong family of faith, life in the refugee camp wasn’t free from danger. The more Aftab spoke openly of the plight of Christians in his home country, the more Muslims in the camp became enraged. One night, he was led outside of the camp and brutally beaten. Pictures from the night show a swollen face covered in bruises and bandages.

Friends warned him he had to leave. Without the documents he needed to protect him long-term, he fled. Again.

He says it’s a miracle he is still alive. He recounts story after story of ways the body of Christ served him and protected him along the journeys. One friend he met would call a friend in another country. One pastor would reach out to another on Aftab’s behalf.

A final leg of his journey brought him to a community in Europe where Ian serves. Ian heard from a friend that Aftab needed help. He found Aftab living outside a train station with nowhere to go. Ian found a place for Aftab to stay for a few nights and even invited him into his home for a couple of weeks before long-term refugee housing became available. A friendship grew, and today, they serve as ministry partners.

Aftab is grateful and faithful, but his heart still breaks for the situation of Christians in his home country, and especially his family. He longs to bring them to safety with him. He asks God to bring his lonely hours without his family to an end.

Aftab’s is just one story. He shared others from his home country, where Christians are a minority and a constant target of persecution. He doesn’t just recount news events. He knows people who have had their homes burned. Women, sometimes young girls are raped and forced to marry or face death threats against their families. Beatings are common. Execution is a reality. Generations of families are forced into indentured service in scenes that sound eerily similar to the Israelites enslaved in Egypt.

“Hearing Aftab’s story and others who have very similar stories have encouraged my faith,” Ian says. “Especially the faithfulness of the persecuted church. They live day in and day out in persecution, and it would be very easy for them to convert to Islam, and most of the persecution would go away. Instead they say, ‘No. We’re followers of Christ. Even if you rape our daughters, even if you kill our sons, we are still going to follow Christ.’”

Will you join Southern Baptists in praying on Sunday, Nov. 6, 2022, for persecuted Christians around the world? Pray that the gospel would continue to spread even in the face of persecution. Ask God to reunite families. Praise God for the faithfulness of believers around the world who are choosing to follow Christ, even unto death. Ask God to hear the cries of His children and be their Deliverer.

Resources, including photos, videos, stories and a bulletin insert, are provided at imb.org/persecuted.