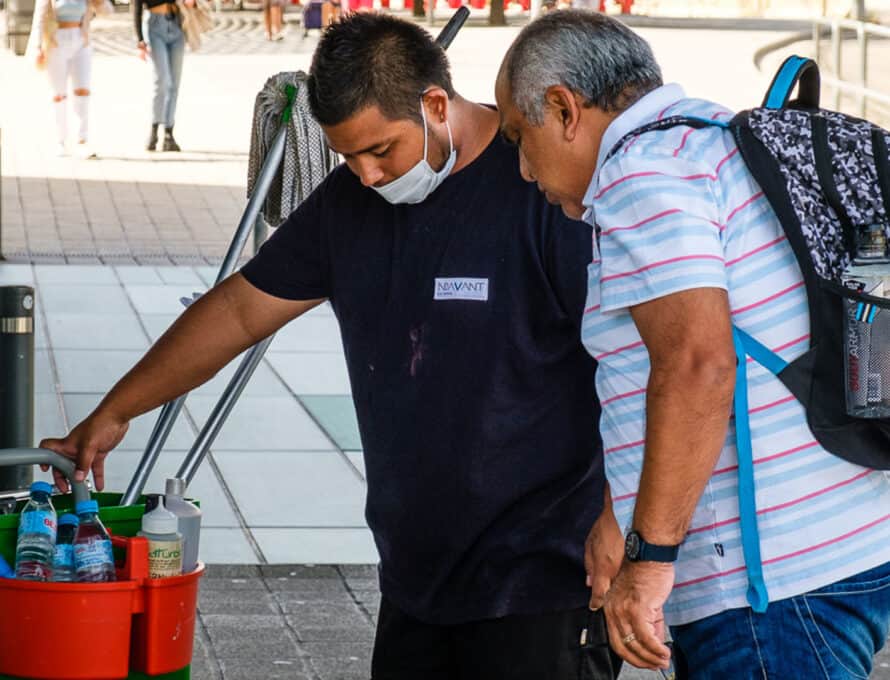 Victor Reyes prays with a man on the streets of Spain. Reyes was on a mission trip with a group of Hispanic Baptists from Florida and Louisiana partnering with Spanish churches and IMB missionaries. (IMB Photo)

SPAIN (IMB) – When pastor Victor Reyes traveled to Spain as part of a vision trip with the International Mission Board in September 2021, he went with an open heart and willing hands. Reyes, alongside his wife, Loyda, and other pastors and their wives, wanted to lead their churches to get involved with reaching the lost in difficult-to-reach places.

Less than a year after that vision trip, Reyes channeled what he saw, and the calling God placed in his heart, into a two-part plan spanning the next three years. 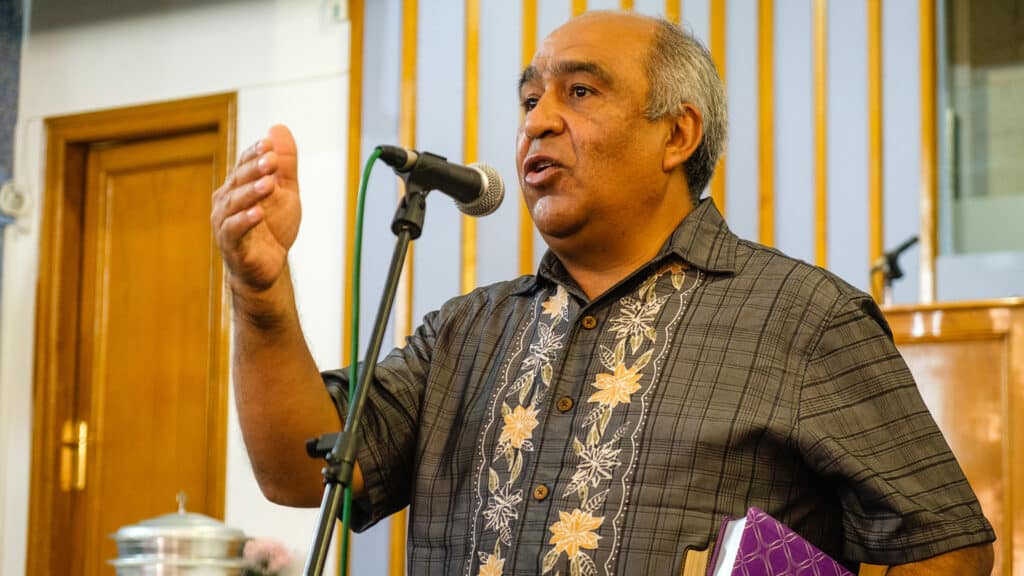 Victor Reyes speaks during a worship service. Reyes was on a mission trip to Spain, with a team of Hispanic Baptists from Florida and Louisiana partnering with the local churches and IMB missionaries reaching immigrants in the city. (IMB Photo)

“During my time in Spain I found that IMB missionaries are working hard in taking the gospel to hard-to-reach places,” he said.

Reyes traveled from Florida to experience and better understand how he and his church can be used to share the gospel with unreached people groups. He saw that, for the most part, churches and missionaries on the field could become disconnected. If only the pastor or one church member were the only ones making contact, it could leave out others.

Reyes along with other Hispanic pastors and their wives joined IMB missionaries who serve among immigrants and displaced peoples, many from predominantly Muslim home countries. They wanted to find a way to connect on a deeper level and reach the nations together.

Now Reyes and his wife are going back to Spain, and they are bringing another pastor friend and his wife with the intention of working alongside the missionaries, helping to connect local churches to the missionary work being done through the IMB. Placing Hispanic believers among the world’s lost is essential for the advancement of the gospel and a significant part of IMB’s mission to meet global lostness with the solution of the gospel.

“We are bringing training to the churches on starting gospel conversations and sharing their testimony,” Reyes shared about the upcoming trip. “We plan to model conversations for them and take them out to have real-world conversations.”

Gabriel and Camila Santiago are a Hispanic couple who serve with the IMB in Spain. They build friendships, which often lead to opportunities to share the gospel. Reyes hopes to facilitate a connection between the local churches that attend the training and the Santiagos.

In 2021, Reyes met a Brazilian pastor called to lead a historic church primarily composed of older believers during his trip to Spain. The pastor and his wife were called to help with the church’s revitalization, and their youth and Latin roots were key in the church’s decision to call them. The pastor shared with Reyes plans to use the church’s parsonage as missionary housing, but as it stood, the parsonage was uninhabitable.

The second part of Reyes’ three-year commitment is to help the church restore the parsonage.

“We want to bring teams with us to help restore the parsonage. We plan on bringing people to work and materials to build.”

As the trip draws closer and preparations are finalized, Reyes asks others to pray, give and go.

“We want to bring encouragement to the local church in Spain; we want to love them and care for them. They are the ones, after all, that will continue to disciple and care for new believers after missionaries reach them.”

Keila Diaz is a digital communications assistant for the Florida Baptist Convention.