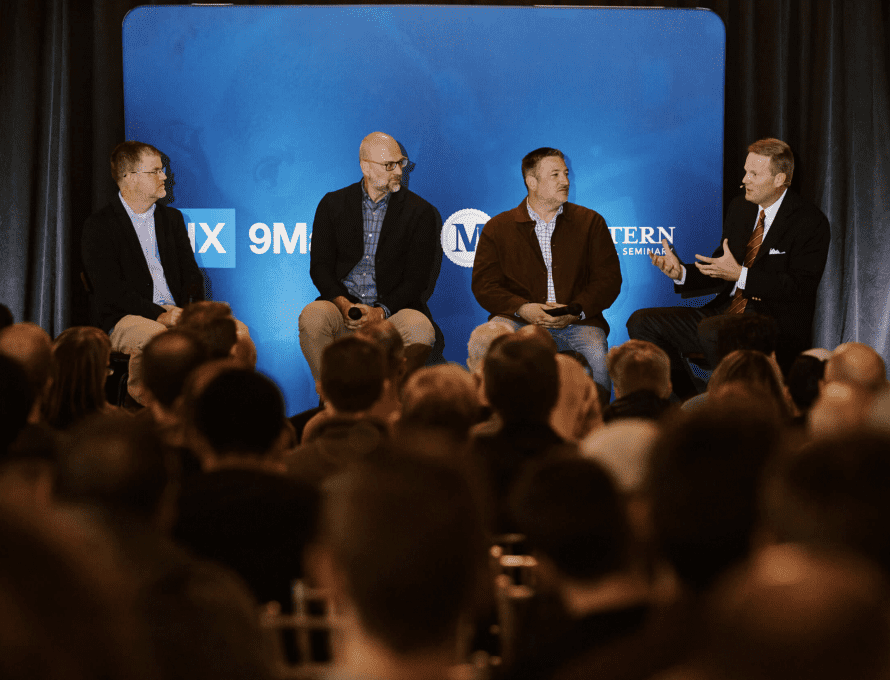 KANSAS CITY (MBTS) – Midwestern Seminary partnered with 9Marks to host a dinner and panel discussion on the future of evangelicalism at the final Together for the Gospel conference on April 19.

Following a meal and book giveaway, Midwestern Seminary President Jason Allen moderated a panel that discussed the topic, “Why We’re Hopeful of the Future of Evangelicalism.”

Agreeing with Allen’s analysis, Kidd stated, “The problem in America is that the news media defines evangelical as merely political. If evangelicals go through a time of sifting or suffering though, we may see the decline of nominalism and a more accurate definition or identification of evangelicals.”

The panelists then discussed several temptations for current evangelicals before detailing the future hope for evangelicals.

“Our culture has often played on evangelical fears to win political votes or influence cultural trends,” Allen said. “Evangelicals, just like other groups, are a people who can be prone to political manipulation based upon their spiritual convictions and fears.”

Turning the conversation toward the future, Allen stated, “I think we’re seeing a decentralization of American evangelicalism, and I think we’re also seeing a rightful prioritization of the local church.”

Leeman went on to explain that the decrease of nominalism and the purification of evangelicalism will likely be a two-step process.

“The first step will be balkanization,” he said. “Different groups will respond in different ways to cultural phenomenon. People will leave the same church to go to a more conservative or more progressive church.”

“The second step could be a purifying,” he continued, “but it will take a while. This is why we need to make every effort to maintain the unity of the spirit in the bond of peace.”

Each panelists expressed their gratitude to God for the global church and the example that global evangelicals have set for the American church.

Wilson, reflecting on the influence of global evangelicalism, stated, “On trips I have taken overseas, the way brothers speak about the state of the church and the unity they experience, reveals that they are often further along than we are in the States.”

He went on to say, “We have much to learn from global evangelicals about how they have been faithful despite being a distinct minority.”

Leeman agreed, expressing his desire for the American church to learn more from churches overseas. He stated, “We need to learn how we can continue to supply the church around the world while at the same time learning from them in a number of ways.”

Reflecting on the decentralization of American evangelicalism and offering a model of hope, Kidd explained the major progress evangelicalism has made in the greater Boston area.

After noting how the number of Protestant congregations in this area has doubled in the past few decades, he asked, “How did that happen? You can point to organic movements or the intentional planting of new churches by mission organizations, all which are commendable, but this is a movement of the Spirit.”

Allen concluded the event with an encouraging word, saying, “I am never going to bet against the preaching of the Word and the sharing of the gospel and the living of the Christian life, not in a thousand years. At its core, this is what evangelicalism is, a belief system, and this is why I am hopeful.”