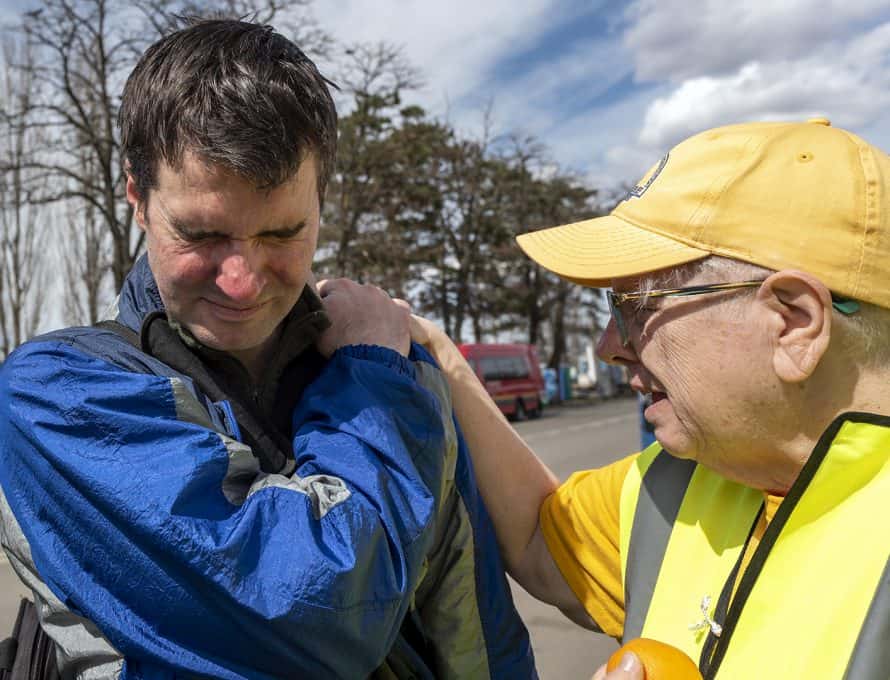 Yura crossed the board of Ukraine and Romania and stopped to grab a bottle of water at the Southern Baptist Disaster Relief and Send Relief station. Yura explained that he was also a Baptist and asked for the volunteers to pray for believers in Ukraine who are still sharing God’s love. (IMB Photo)

ROMANIA (IMB) – Yura knew reunion was on the horizon and he found an oasis on the way.

Yura accepted a bottle of water offered at the station, noticing the Southern Baptist Convention sign on the station and the vests and hats of the volunteers.

“I’m a Baptist too!” he exclaimed.

Yura set his bags down on the pavement to take a moment for physical, emotional and spiritual nourishment.

When SBDR team members offered other snacks and supplies, Yura said to save them for those who needed them more. However, he accepted two lollipops to take to his children. The acts of kindness brought Yura to tears – he looked down at the pavement and whispered a thank you.

“I cannot believe that I am here, that this is true,” Yura said.

His wife, Sveta, and their two children fled Ukraine, not knowing whether they’d see their husband and father on this side of heaven. Yura remained to defend his country. They spent one month separated until Yura was released early from military obligations due to a medical condition he’d had since childhood. 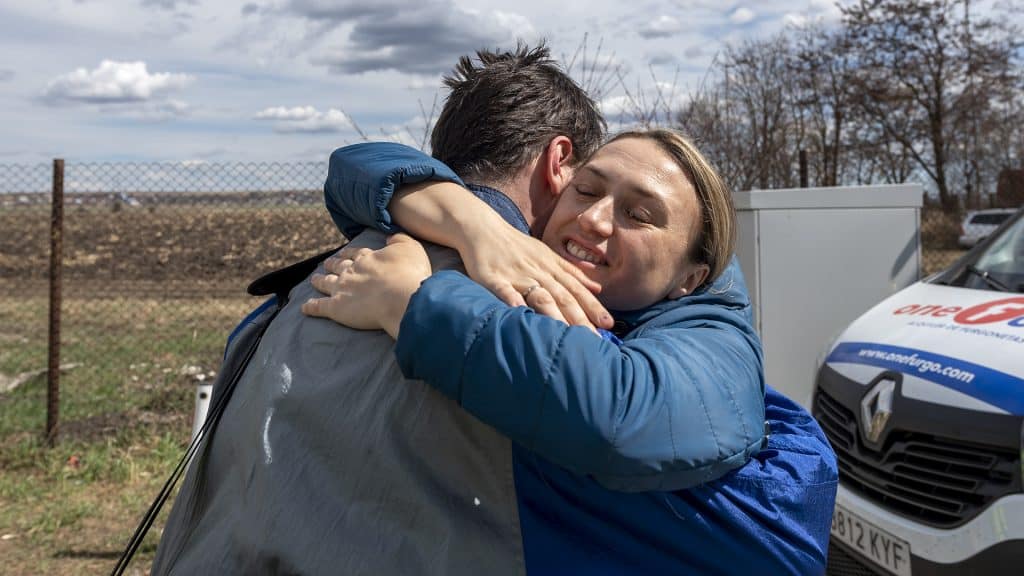 Yura reunited with his wife at the border of Ukraine and Romania. Yura sent his family to safety across the border while he stayed behind in Ukraine. When he was released from duty and got all of his company’s employees to safety, Yura joined his family. The couple attend a Baptist church in Ukraine and say believers there are sharing the gospel with neighbors. (IMB Photo)

Sveta called Yura after they arrived in Romania one month ago and told him their son asked why the bomb sirens weren’t sounding. Yura remembers when the first bomb landed in their hometown. The Russian plane flew over their heads, with the deadly cargo waiting for its expulsion.

“We’ll pray for healing for his mind,” Mickey Ebert offered. Ebert represents the Missouri Baptist Convention and is leading an SBDR team to serve refugees at the border.

Yura told the volunteers there was a time as a Christian that he had doubts about his beliefs. He pulled a Ukrainian translation of Lee Strobel’s book, “A Case for Christ,” out of his black shoulder bag. This, he said, helped erase the doubts.

Seeing the Bibles and gospel literature on the table, Yura shared Christians in Ukraine were also outside, handing out New Testaments and gospel materials.

“They believe it is very important to share the Truth,” Yura said. “Pray for people in Ukraine to come to Christ. It’s a difficult time, but it’s a time for repentance.”

“If we have the option, we want to return to the Ukraine, because there are many people who need the gospel of Christ,” Yura said.

His boss invited him to move to work in Germany. He said he needed to think and pray first.

“Maybe God will need me in Ukraine. Pray for God’s will in our life. We don’t know what to do next,” Yura said.

Yura thanked Baptists, both those present and those in the U.S., for praying for Ukraine.

Meeting fellow Christians was a stream in a month-long desert of fear, loss, separation and a long exodus from central Ukraine.

“It’s such a blessing to have a conversation with you, it’s a pleasure to get something from you,” Yura said, his voice breaking. “I’m going to cry.”

“Thank you, I know your reward in heaven, it will be very great,” Yura said.

“We will see you there,” Ebert replied, smiling.

“See you in heaven!” Yura called over his shoulder, waving goodbye to the volunteers from Texas, Missouri and California. Stan and IMB missionary Luke In helped carry Yura’s bags.

Reunion was on the horizon.

Yura’s pace quickened at the sight of Sveta. The couple embraced and kissed amidst tears of thankfulness and relief.

Pray for Yura and Sveta as they discern where the Lord will lead their family. Pray for Christians in Ukraine to continue to share news of hope in a land of loss. Pray, as Yura asked, that this season will be one God redeems and uses to make a case for Christ’s redemption.

Continued giving through Send Relief will meet the immediate and long-term needs of refugees and their families.

Caroline Anderson writes for the IMB.