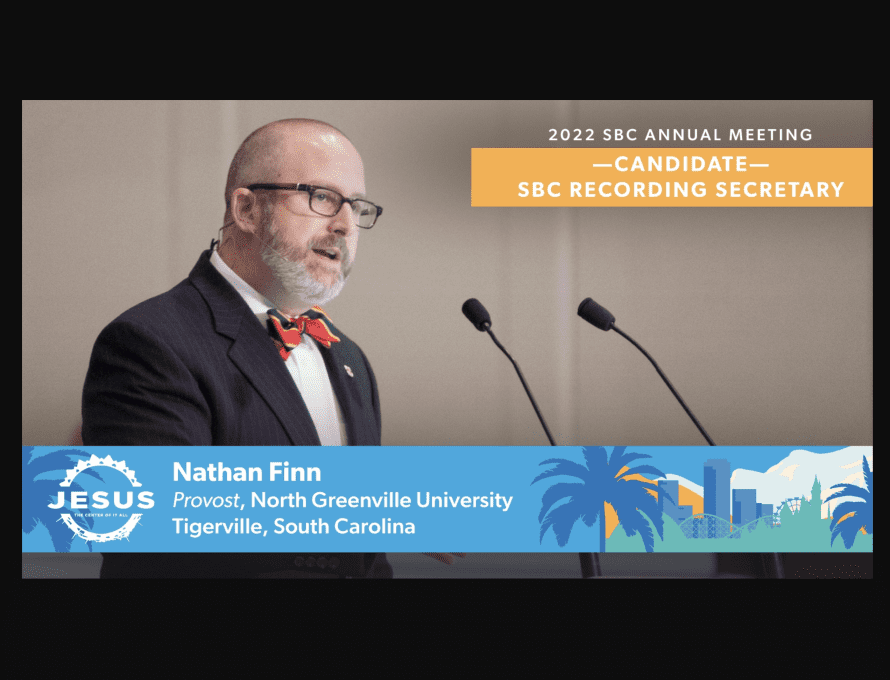 Finn is the second announced candidate, along with Javier Chavez, for the opening created last month when John Yeats announced he would not seek the office again this year. Yeats has served in the position since 1997.

“Nathan is highly qualified to serve Southern Baptists. He has worked to achieve expertise in the history of our convention,” Barber said in a statement sent to Baptist Press. “Nathan is not merely a chronicler and student of our convention; he is also engaged in the present work of our family of churches. Last year he was the vice chairman of the Committee on Resolutions. While holding teaching positions at Union University, SEBTS, and presently at North Greenville University, he has preached and taught in churches throughout our convention.”

While he has served in the denomination in numerous ways, much of Finn’s service to Southern Baptists has come in the academy and through his writing. He currently serves as provost and dean of the university faculty at North Greenville University – a position he has held since 2018.

Prior to that, Finn served as dean of the School of Theology and Missions and professor of theological studies at Union University in Jackson, Tenn., from 2015-2018 and taught church history at Southeastern Baptist Theological Seminary from 2007-2015. He has contributed to and authored several books and academic works including The Baptist Story and Historical Theology for the Church.

Finn and his wife, Leah, are members of Mountain Creek Baptist Church in Greenville, S.C. According to Annual Church Profile data, the church averages 182 in worship and gave $56,034 (9.2 percent) of its undesignated receipts of $606,270 through the Cooperative Program last year. The church also reported three baptisms in 2021.

Finn holds a bachelor’s degree in history from Brewton-Parker College and both an M.Div. and Ph.D. from Southeastern Baptist Theological Seminary. He and Leah have four children.