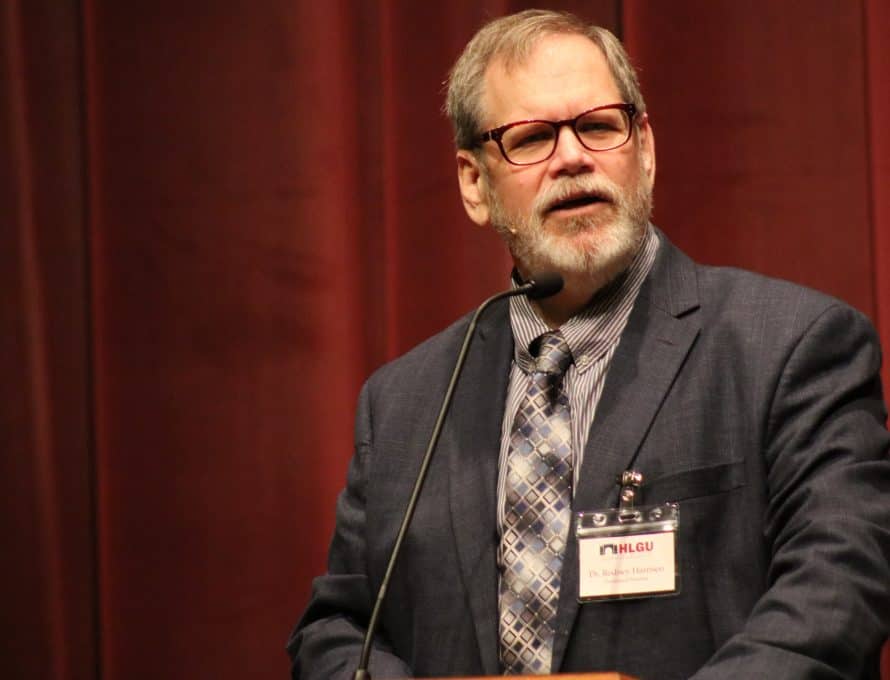 HANNIBAL – Hannibal-LaGrange University (HLGU) trustees announced, March 5, that Rodney A. Harrison would serve as the entity’s transitional president. He officially assumed the role on March 7. The following day, he announced a March 10th prayer gathering and solemn assembly prompted by an ongoing financial crisis at the university. See related story here.

Alongside his new role at HLGU, Harrison continues to serve as president of Baptist Homes & Healthcare Ministries, where he has served since April 2020.

On March 16, I emailed Harrison several questions regarding HLGU’s financial crisis. He replied the following day.

A complete transcript of my exchange with Harrison is printed below:

Benjamin Hawkins: What facts were staff and faculty informed about during their meeting last Wednesday (March 9)? How did you describe the situation to them?

Rodney Harrison: Faculty were informed on March 9 of the current financial situation, which included at the time over $650,000 of unpaid invoices dating back to November. I also informed them that the unpaid bills were increasing over $30,000 per week. Additionally, the University has no major revenue streams receivable until fall. As a result, fiscal exigency was declared which will allow the university to take the necessary actions to support HLGU’s mission. This includes reduction of payroll, reduced hours, suspension of 403B contributions. The commitment to keep the mission alive is demonstrated by senior leaders taking no salary or massively reduced salaries for the remainder of the academic year.

Hawkins: What is the current financial status of Hannibal-LaGrange University?

Harrison: The University is suffering from years of spending that outpaced revenue and endowments, resulting in a position where the university is unable to pay its bills. At the time I was called as transitional president on March 5, the university needed $4.1 million to stay open this year without immediate changes in spending.

Hawkins: What is the status of HLGU’s debt? Who is owed, and how much?

Harrison: The university currently owes over $690,000 to the providers of food service, campus operations and other ongoing services. Many of the past due accounts go back to the beginning of November.

Hawkins: What is the plan for addressing this financial crisis?

Harrison: We have implemented what we are calling the “Integrity Plan” to ensure all vendors receive regular partial payments while paying off the debts one at a time. This approach is based on the well-known Financial Peace University process.

Hawkins: Why did this crisis occur? What is the root of the problem?

Harrison: The university did not have a plan for scalability, so in that regard it was a systematic flaw in the strategic plan. During the solemn assembly some participants reported brokenness over attitudes that negatively impacted enrollment, other confessed relationships that were broken and promises that were not honored. As with many crisis, the root of the problem was a failure to live up to God’s standards of action and behavior.  In many ways, Missouri Baptists, with myself included, have failed to love and cherish our Baptist universities as a sacred trust.

Hawkins: How long has this crisis been building? When was it discovered that there was a problem to begin with?

Harrison: I believe it is safe to say those on the outside saw this coming a long time ago.

Hawkins: What have been previous strategies for handling or trying to prevent the crisis?

Harrison: I cannot speak to this question.

Hawkins: Is closure of the school a possibility?

Harrison: A week ago I would have said, “Yes.” Today I believe we have implemented a plan that will ensure the university and its mission stay alive. That plan, coupled with the outpouring of prayer and support, is placing the university back on the right foundation of Christian fidelity and fiscal integrity.

Hawkins: If closure is to be avoided, what will need to change at the school?

Harrison: First, we have implemented a business model that cuts expenses. This  was the hardest part as these reductions have names, families and other obligations. However, these reductions in hours and pay brings spending in line with expenses while positioning the university for the new academic year in the fall. The upcoming budget reflects enrollment realities, major curricular adjustments to reduce redundancies and reassessment of underperforming programs. These changes ensure every class provides positive revenue. Benchmarks will be monitored to ensure the leadership continues to make God-honoring decisions that support our students and their studies. The new budget is scalable to enrollment and costs, providing necessary flexibility in these inflationary times. In many ways, I believe what we are doing at HLGU could be a template for other universities facing similar challenges. What the budget does not reflect is the resolve to trust in the Lord rather than lines of credit. It is no longer acceptable to spend money we do not have, nor to approve budgets based on aspirations.

Hawkins: I have heard reports about the possibility of widespread staff cuts. Is this true? To what extent is staff expected to be cut? How many administrative staff vs. faculty are expected be cut?

Harrison: The basic plan was outlined to faculty and staff last week and will reduce payroll by 25% immediately. Senior leadership are working for no salary or taking cuts of 50-60%. I could not be prouder than to serve with leaders who are demonstrating a sacrificial commitment to the mission of the university. I have accepted the resignations of two leaders, and we will continue to assess the needs throughout the summer.

Hawkins: How will courses and degree options be affected by this crisis?

Harrison: The curriculum is being streamlined to align with national standards established by our accreditor. This will involve consolidation of many electives courses that were currently taught with only two or three students. Underperforming programs will be revised or eliminated. Little change is anticipated in the degree offerings, however, a reduction in redundant and elective courses will streamline the curriculum 40%.

Hawkins: Also, I heard that the school is filing for financial exigency with the accreditation agency. Is this true? What does this mean for the school?

Harrison: The Higher Learning Commission is our partner in this process. We have spoken with them and provided them with all of the data needed to help them guide us through this process.  Exigency in a historical context allows universities to modify the protections offered by tenure. In our context, the institution’s declaration of exigency allows the university to modify contracts and implement austerity measures needed to ensure the mission and integrity of the university is maintained.

Hawkins: Does this crisis jeopardize accreditation?

Harrison: The criterion for accreditation includes fiscal integrity. I have been transparent with the Higher Learning Commission. Our HLC representative was fully supportive of the steps taken to address our immediate concern. I am hopeful the Integrity Plan along with the decisions that are bringing our spending in line with revenue bring the university into full compliance with the accreditation criterion. At this time, HLGU is fully accredited with no sanctions, as noted at https://www.hlcommission.org/component/directory/?Itemid=&Action=ShowBasic&instid=1432

Harrison: The current semester is continuing with no changes in the course offerings or calendar. Graduation will be held on May 14 at 10:00 am.  and our summer term begins May 16.

Hawkins: When do you anticipate making announcements about the 2022-2023 school year?

Harrison: We will be posting the fall schedule of courses in the next two weeks.

Hawkins: Has the Missouri Baptist Convention Executive Board ever discussed with you or, previously, with Dr. Allen about a possible plan to financially assist HLGU through this crisis?

Harrison: HGLU receives $56,000 per month from the Cooperative Program. Dr. Yeats has established a task force to work with the university to address the significant shortfall.