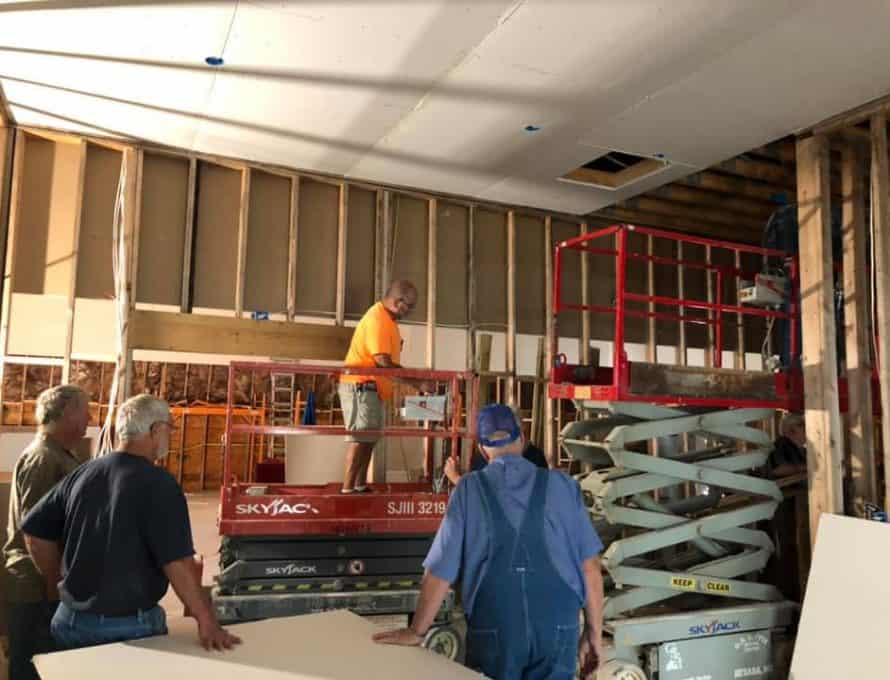 MILO – Campers On Mission rolled out of Milo Baptist recently after contributing labor to an ongoing project that will add a multi-purpose building to the church. Six couples from the volunteer organization spent two weeks at Milo, camping on the church grounds in RVs, to help the church complete its project without incurring debt.

“Campers On Mission go around to different churches and do construction work,” says Milo layperson and general contractor Jim Wilson. “Six of them came to Milo and camped out and were here for two weeks. They put up insulation and sheetrock. They’re a great group of guys and do good work.”

John Janes, co-president of the Missouri chapter of Campers on Mission, says the group – often retirees – saved the Milo congregation “a few thousands of dollars.” The group often resides on worksites when they can hook up electrical and water connections.

“We’re running on a tight budget,” Wilson says. The church used Campers On Mission when it was available, and the church had the building supplies. “We have to wait for money to build up in the account before we can purchase material.”

Milo Baptist, a congregation of about 25, plans to use the building for different church and neighborhood functions, he says. “We’re limited on classroom space for kids,” Brown says. Also, “The intent is for the community to be able to use it as well.”

He says the Milo church responded well to a recent fundraising challenge to purchase materials, hosting car washes and bake sales, prior to the construction group’s arrival.

Milo Baptist is one of two churches Brown pastors. He also leads the nearby Montevallo congregation. Both are near Nevada in west central Missouri and part of the Osage River Baptist Association.

“They’re both small communities without stores,” Brown says. At one time local residents “went to the small church now in town. Now a lot of them drive elsewhere to a bigger church.” The Montevallo church has 12-15 members.

He says both churches could use growth, but he also sees the need for outreach and an emphasis on discipleship.

“You want to see growth in numbers,” but in Brown’s experience “when the church is discipled well and makes disciples, then growth tends to fix itself.”

The churches have performed some outreach and started new ministries. In Montevallo the church had a late summer back-to-school party for the community.

Brown says he’s been asked why the two congregations don’t simply join together. The answer is in part due to his own and the churches’ determination.

“I hate to see a church presence leave the community—whether that’s 12 people gathering together, or 1,200.” Where the church exists “there’s still a witness…of the faithfulness of those people.”

He says the churches have “a core group that’s remained faithful…and will do what it takes to keep the church moving.” With that commitment there are continued opportunities for folks to learn about Christ, as happened earlier this year when a high school student in the Montevallo congregation made a commitment to Christ. “We baptized him in May,” Brown says.