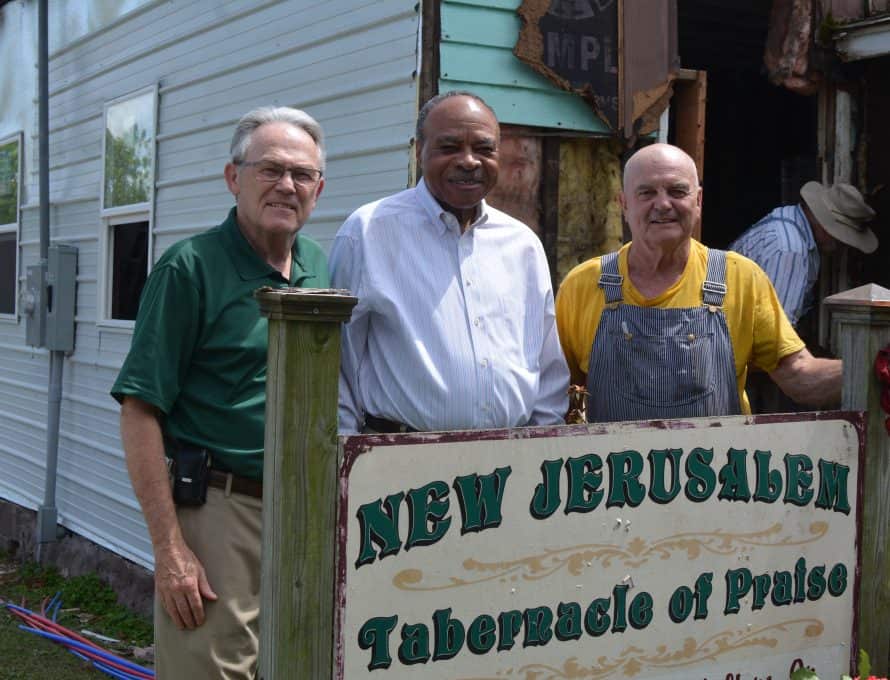 LOUISIANA, Mo. – There’s a beautiful picture being painted here. The canvas is the body of Christ in two churches – one whose building is temporarily out of service and one reaching out to the other. The brush is the movement of the Holy Spirit. The picture is titled, “Christian Unity.”

As dark colors can accent a picture, so the dark times, like a church fire, can highlight God’s work.

In September, 2020, lightning struck the New Jerusalem Tabernacle, a non-denominational black church in town, damaging the electrical panel. Fire broke out about noon. Bill Maupin, pastor of First Baptist Church, went to the scene and comforted New Jerusalem Tabernacle parishioners as they waited for their pastor, Horace Walters, to get there.

Buffalo Township Fire Protection District and Louisiana Fire Departments soon got the fire out, but the New Jerusalem Tabernacle had smoke and water damage.

“I was shocked. I was devastated (hearing about the lightning strike). I thought the building had burned down (until I arrived) and then I saw it wasn’t burned down.  I was happy, but I wasn’t happy,” Horace Walters said.

“Our church got together and prayed a lot. We hoped to rebuild the building. I’m satisfied we can rebuild it.” Walters said.

Maupin contacted Baptist agencies, Missourians on Mission and Campers on Missions, and they sent teams to rebuild New Jerusalem Tabernacle.

“They’re from all different parts of Missouri to help us rebuild. The pandemic didn’t stop them from sharing their talents and testimony. I think on this every day. Their heart is to go out and help people. God is awesome to let this happen. It’s a joy,” Walters said.

“I went to our church leadership and suggested we open up our church to them. They were very receptive. I already had a friendship with Horace and Mary. I told them they could have a different part of our building, or worship at a different time or worship with us,” Maupin said.

“I asked my church, and they wanted to worship with them,” Walters said.

In good artwork, different colors are used. In God’s artwork, it’s the same.

“I’ve washed feet before. It was a symbol of respect, love and humility. We serve each other,” Maupin said.

“I’ve washed feet before too, but this was special,” Walters said.

“During the Lord’s Supper, one of his members spontaneously sang a beautiful song. It was the Holy Spirit moving. If we were having a joint worship, I wanted to give Horace an opportunity to share. He goes first saying what he feels God is leading him to say,” said the FBC pastor.

“It’s a wonderful thing, all being in one accord. We don’t talk about the Scriptures we use ahead of time, but most of the time, we have some of the same Scriptures. It is the Holy Spirit working. It puts a smile on my face. It gives me joy,” Tabernacle pastor Walters said.

Some artwork starts with a preliminary sketch. For this picture, the “sketch” was a riverfront revival months ago.

“The Holy Spirit put it on my heart to hold a revival. I asked the Catholic priest and Bill Maupin to share a message. It was a glorious time and people spilled into a restaurant parking lot,” Walters said.

An artist will use all shades of colors.

“One of our members was asked if our pastor was open to different races. She said, ‘Yes. Eleven of his (22) grandchildren are African-American.’ Maupin recalled of the conversation. He also had several African-American members in his congregation before the fire.

“I’m not color blind, I’m color blessed,” Maupin said, quoting Rick Warren. “We have CRT, it’s not Critical Race Theory, but Christian Race Transformation. That’s what Dr. King said – ‘it’s not the color of their skin, but their character.’”

“Pastor Bill and all his members treat us like family. I feel nothing but love there,” Walters said.

The two congregations will keep meeting as one until New Jerusalem Tabernacle is complete, perhaps by late fall. Dry-walling is in process.

“Even after we’re rebuilt, we will come back and worship, and they will come worship with us,” Walters said.

When an artwork is ready, it is exhibited. Creator God is showing two churches, the city of Louisiana, and the whole body of Christ a beautiful display. The elements work together, and God’s love, grace, and unity shows in the picture.