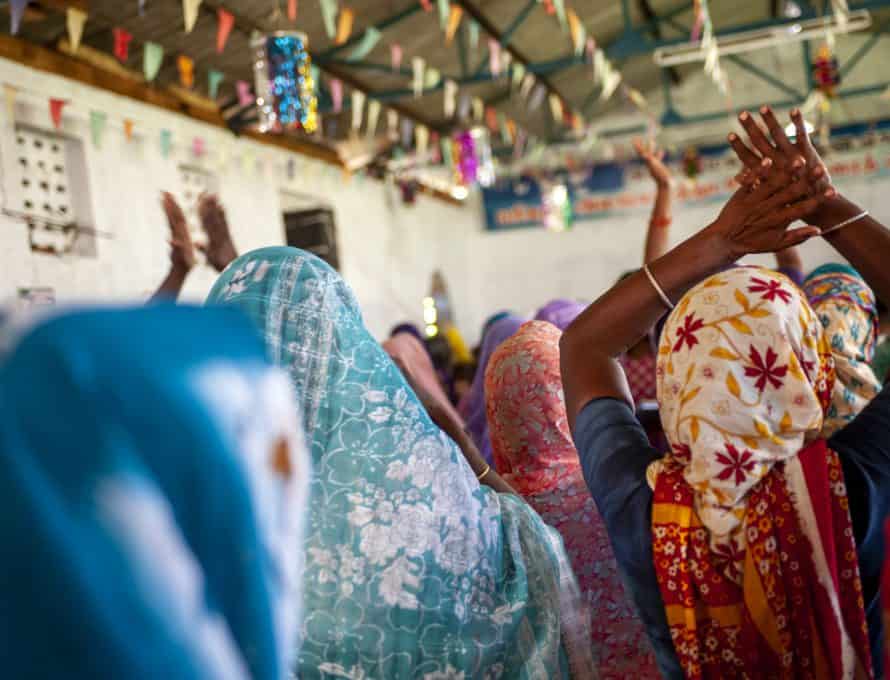 South Asians worship together during a Sunday morning service at a village church. Tsunami relief given by Southern Baptists (in 2009) gave a small fellowship voice in their community and increased their church from 12 members to over 100.

SOUTH ASIA – Missionary Liz Karwood* reports that in the area of South Asia where she serves, the lostness can feel staggering. She understands that her team can’t even begin to reach the 25 million Muslims in her region without involving other believers. She also understands that “God is working and is bigger than the task in front of us.” Faced with multitudes of people who do not know Jesus, her team has intentionally focused on evangelism training and building partnerships with South Asian believers in the missionary task.

Karwood tells of one missionary training where only two women attended. One woman was a pastor’s wife. Another woman, Lipti*, was a local believer who attended though she had to bring her six-month-old son. The first part of the training includes how to start a conversation with a Muslim and share the gospel. The second part of the training includes heading out to the streets to practice.

Going out to engage people with the gospel can be intimidating for some, and Karwood says that she often faces excuses when people are asked to actively go out and share their faith. She assumed that Lipti would have a good excuse since she was caring for her son, but she seemed the most eager and convinced the pastor’s wife to also join. Karwood and her friends ventured into the neighborhood, praying for opportunities to start gospel conversations.

Neither of these women had ever shared the gospel with a Muslim and didn’t even know where Muslims lived in the area.

“We just started walking toward the neighborhood market and praying to find some Muslim ladies,” Karwood said. In the heat of the day, no one was outside, but they ventured into a hair salon in an area marked with green flags. Green is a holy color for Muslims and is often a sign of areas where Muslims live and work.

Inside the salon, Karwood chose to have her eyebrows shaped as a way to begin a conversation with one of the salon workers. As the opportunity to speak clearly about the gospel became evident, Karwood said to Lipti, “Your language is so much better than mine. Why don’t you tell these ladies how they can have forgiveness of sin?”

Lipti then started to share the gospel with the salon worker, explaining that we have to believe in Jesus’ death as payment for the forgiveness of our sin. As Lipti spoke, the salon worker stopped her and called out for women in the back of the salon to come hear about Jesus, too. Lipti, still holding her baby, continued to share the story of Jesus to the six women who gathered.

None of those women decided to follow Jesus that day, but Lipti now understood the significance of the training and how the good news of Jesus could be shared. As they left the salon, Lipti said, “Wow! I never knew it was so easy to share the gospel. Let’s go find someone else.”

As they walked toward the training site, they passed a woman selling coconuts on the side of the street.

Lipti asked Karwood to hold her son, while she told the woman about Jesus.

“I’ve never been happier to partner with a national believer,” Karwood said.

“That day I was amazed to see how God was calling more laborers like Lipti into the harvest field. She, like many other believers in South Asia, is taking ownership of the core missionary task.”

Karwood encourages others to consider their role in the missionary task and to show the same enthusiasm and boldness as Lipti did in sharing about Jesus.

Leslie Peacock Caldwell is managing editor for the IMB.