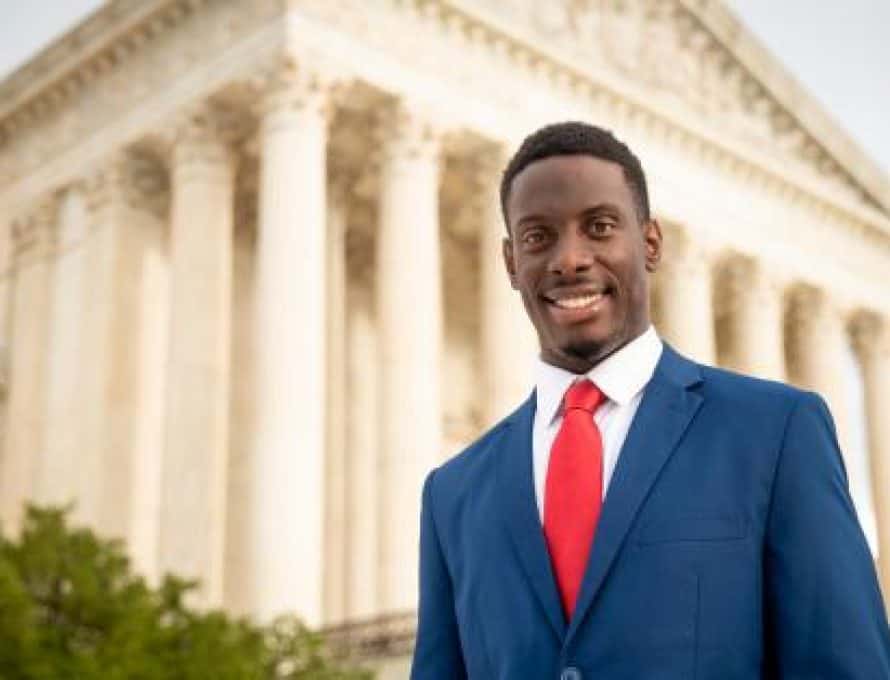 Chike is a former student at Georgia Gwinnett College who in 2016 was twice silenced when he tried to share his Christian faith with fellow students in a public area of campus.

College officials first silenced Chike by limiting when and where he could speak, telling him to reserve one of the two tiny campus “speech zones.” Yet, when Chike followed their directions, campus police approached, telling him to stop because someone had complained. The officers demanded his ID card and ordered him to stop speaking, threatening him with discipline, even expulsion, if he continued to share his faith.

Joseph Bradford was also a student at the time, and also wanted to share his faith with other students, but was “chilled” from speaking by the knowledge of the college policy and the threat of discipline.

Alliance Defending Freedom challenged the college’s unconstitutional policies in federal trial court. Eventually, in response to the lawsuit, the college made some changes to its speech policies and argued that it should be able to avoid any penalties for violating Chike and Joseph’s First Amendment rights.

After delaying a ruling for more than a year, the court agreed with the college. It ruled that because the college changed its policies and because Chike had since graduated, he couldn’t receive any relief.  Under the legal doctrine of “mootness,” the 11th Circuit Court of Appeals said federal jurisdiction ends when the policy changes, and even the students’ claim for nominal damages did not keep the case alive, or obligate the college to pay the students’ attorney fees up to that point.

Kristen Waggoner, ADF General Counsel, argued for the students and emphasized that every violation of constitutional rights is a significant legal injury, even though it may be difficult to quantify or monetize the harm in typical “money damages” terms. Therefore, the courts have recognized since the common law that “nominal damages” may be awarded in cases like trespass, unlawful search and seizure, or violation of free speech and religious expression.  The students have lost forever the opportunity to share the gospel with fellow students who might have heard the truth if the restrictive policy hadn’t been in place. That’s real harm, though hard to measure in dollars and cents.

A U.S. Dept. of Justice deputy solicitor general argued in support of the students and in favor of the rule followed by most lower courts that nominal damages keep a case alive in federal court, and may entitle the prevailing party to have attorneys’ fees paid by the losing party.

Andrew Pinson, Georgia Solicitor General, argued for the College that nominal damages were only “symbolic,” and were not compensation for a concrete injury that could sustain federal jurisdiction. Justice Elena Kagan probed, “Symbolic of what?” She gave the example of Taylor Swift, who sued a radio host for sexual harassment and asked only for $1 damages, because she wanted to show it was about more than money, but she wanted a judgment to make the point that she had suffered a serious legal wrong.

Justices asked difficult, technical questions of all parties about the nature of nominal damages and the limits on federal jurisdiction under the mootness doctrine.

Religious liberty attorneys Michael and Jonathan Whitehead, a father-son team in Kansas City, listened to the oral argument by telephone conference along with a group of other ADF allied attorneys. The Whiteheads represent the Missouri Baptist Convention and other ministries. Michael serves on the national board of directors for ADF and Jonathan serves on the board of the Ethics & Religious Liberty Commission of the SBC.

“Nominal damages and mootness may seem like technicalities that only concern lawyers and judges, but this case involves real violations of important rights of religious free speech, “Michael Whitehead commented after the hearing. “The government never disputed that Chike and Joseph’s rights were violated. But the state claims it should be able to avoid all accountability for these violations if it changes its policy after the lawsuit is filed.”

“But that would permit the same or a future government official to restore the old policy as soon as the lawsuit is over,” said Jonathan Whitehead. “In our Trinity Lutheran Church case, the Missouri governor changed the challenged policy the weekend before the Supreme Court argument, after five years of litigation.  Fortunately, the Supreme Court held that “voluntary cessation” did not moot our case because a future governor could revert to the old policy. The Court ultimately ruled in favor of our church clients, vindicating their important Free Exercise rights.”

The Whiteheads were counsel of record in Trinity Lutheran Church of Columbia, Mo v. Comer, which was decided by the Court in 2017.   A 7-2 majority upheld the church’s right to equal access to a government benefit program that provided shredded tires for playground surfacing.

“We are cautiously optimistic that the Court will rule for Chike and Joseph, and may adopt a rule that keeps federal courts open to people of faith who have significant constitutional rights that must be measured in something more than money damages,”  Michael Whitehead concluded.  “A favorable decision would likely benefit free speech and free exercise cases far beyond the college campus context.   It will help defend the rights of evangelism and religious free speech for many, many people of faith in the future. “

Friend of the court briefs were filed by many religious organizations including the SBC Ethics & Religious Liberty Commission and the Catholic Church.  Interestingly, some liberal groups also filed amicus curiae briefs in support of the students, including the American Civil Liberties Union (ACLU), the American Humanist Association, and the Council on American-Islamic Relations (CAIR).

A decision is expected by the end of June 2021.