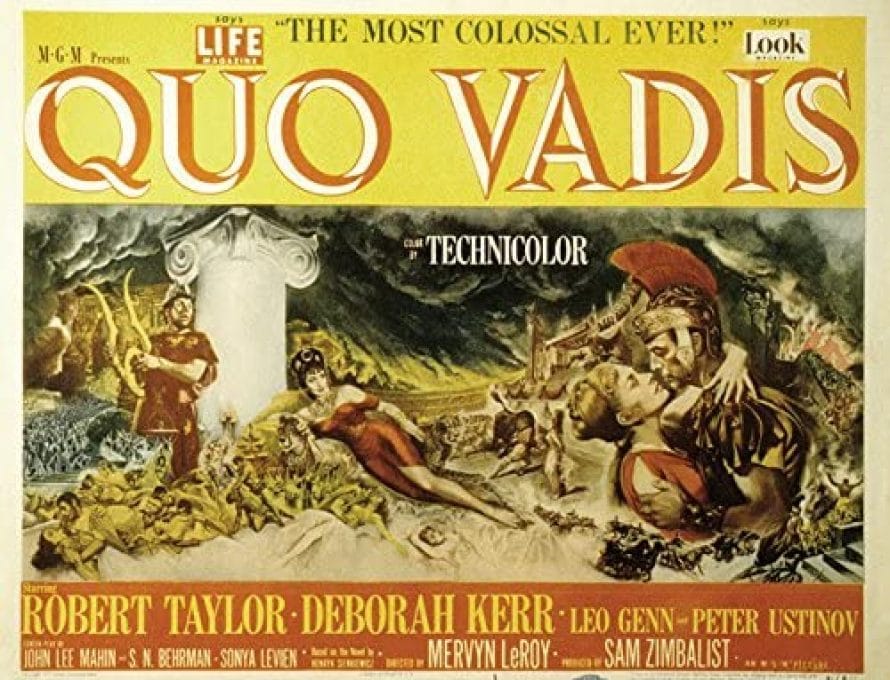 1951 saw another “biblical” epic hit the big screen, this time, “Quo Vadis.” Polish author, Henryk Sienkiewicz, penned the historical novel “Quo Vadis” in 1895, earning himself a Pulitzer Prize. It would later be made into several film versions, most notably the 1951 version we’re discussing today.

The opening prologue makes it clear from the first frame that this is a story set in the backdrop of the Roman Empire in 60 A.D. and the first-century church. We follow Marcus, an up-and-coming Roman officer just returned from campaigns in the north. He expects a relaxing vacation after years at war, but instead becomes a pawn in Nero’s plot against the Christians that have popping up in Rome. Along the way, he crosses paths with a traveling Paul and Peter and witnesses the burning of Rome.

Robert Taylor plays it straight as our main Roman protagonist, while Peter Ustinov is simultaneously funny and frightening as the childish, deranged Emperor Nero, obsessed with burning Rome and rebuilding it for his own glory. He makes American politics in 2020 look downright civil and restrained. Paul, played by Abraham Sofaer, is also excellent. The most recognizable face is a young and striking Deborah Kerr (“The King and I,” “An Affair to Remember”). She serves as a love interest for Marcus, and as such has a rather politically inconvenient devotion to Christ.

Perhaps more than any other “biblical” epic we’ve looked at this year, “Quo Vadis” earns those qualifying quotes around “biblical.” This is not a story adapted from Scripture, like “The Ten Commandments,” and it’s not exactly biblical-adjacent ala “Ben-Hur” or “Barrabas.” Where those two at least had a tangent to the Scriptures, “Quo Vadis” has a link to the old apocryphal book called the Acts of Peter.

My extensive studies of Latin (seven seconds on Wikipedia) tells me that “quo vadis” is Latin for, “Where are you marching?” or, more poetically, “Whither goest thou?” According to the Latin text of the apocyphal book, Peter fled persecution in Rome only to meet Jesus (never mind that the story is set 30 years after Christ’s ascension). Peter asks Jesus, “Quo vadis?” He replies, “Romam eo iterum crucifigi” or, “I am going to Rome to be crucified again.” Peter is understandably shamed and thus gains the courage to continue his ministry and returns to the city to be martyred.

Does a story that hinges on such a unscriptural-account have any value? I see value in “Ben-Hur” and “Barabbas,” and they certainly were extra-biblical, though laughably far from documentary. Stories like those two can help us appreciate the cultural backdrop to the first century and appreciate that many more people were impacted by Jesus’s ministry on earth than are noted in the New Testament. Plus, they’re good movies! My first reaction to “Quo Vadis” is that as long as viewers remember that these stories of Peter, Paul and Jesus are not based on actual Scripture, there isn’t any harm in “Quo Vadis.” And yet, this movie may fall in a strange valley between being based on non-Scripture and too much Scripture-like content. It’s tricky to notice where it’s adherence to Scripture begins and ends. I don’t think many people would be confused and think “Ben-Hur” is a true story with biblical import. If there’s any chance such confusion might happen with “Quo Vadis,” it should be avoided, especially by younger viewers.

On the other hand, it could be a tremendous opportunity to discuss the canon of Scripture, how it came about, and why we shouldn’t place authority in unbiblical, apocryphal books.

As a piece of entertainment, it succeeds. The script is lively, its characters engaging (especially Ustinov as Nero), the sets colorful and the plot interesting. It’s interesting to see and imagine the conflict between this earthly empire and the Heavenly Kingdom. I enjoyed my viewing and resolve to annoy those around me by asking “quo vadis?” next time I want to know where we’re going for lunch after church.

Yes. There are hints of what goes on between female slaves and Roman soldiers, but it’s not blunt or dwelled upon. Like many of these “biblical” epics, it’s long and would definitely test many younger attention spans; “Quo Vadis” clocks in at 2 hours, 51 minutes.