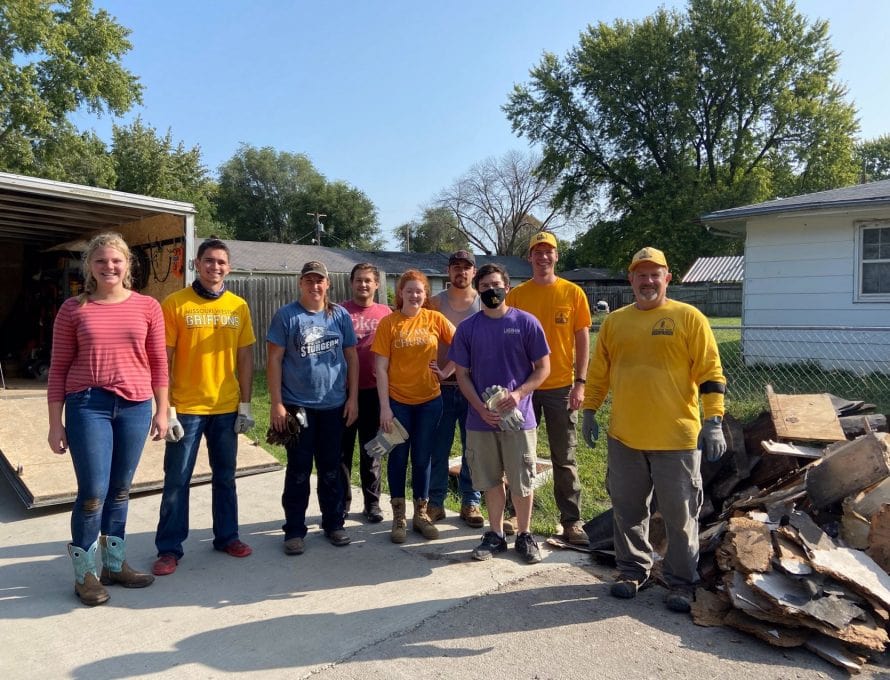 ST. JOSEPH – Disaster relief in the middle of a pandemic is no easy feat, but disasters don’t go on lockdown. On July 21, the south end of St. Joseph experienced flash flooding after receiving five inches of rain, affecting hundreds of residents in the Southside area.

“It’s already a much more impoverished area,” says Isaac Whitman, a senior at Missouri Western. “It’s very blue collar. Historically, that area has been closed off to churches and ministries.”

Of the roughly 130 homes that were seriously damaged, Missouri Baptist Convention Disaster Relief worked on 110 of them. Whitman, who is serving as an MBCollegiate intern alongside Campus Missionary Paul Damery, was one of few college students in St. Joseph over the summer when the flood happened. He and a few others heard about the need through their churches or friends. “We started going down and helping out because it’s local,” he says, “just on an individual basis.”

The students’ assistance proved vital, according to Roger Brumley, Director of Missions for the St. Joseph Baptist Association. “There were a few times that if we had not had their youth and availability, it would have been very difficult to get certain things accomplished,” he says.

Summer ended, and students returned to Missouri Western. The university administration placed an emphasis on caring for the community and community service. “That got me thinking,” Whitman says, “Disaster Relief is something we can do as a college ministry and maybe organize through the campus.” While working with the university did not pan out the way he hoped, the idea sparked Whitman’s initiative nonetheless.

“After Disaster Relief had ended, we discovered one house still needed a floor taken apart,” says Brumley. Whitman organized a crew of nine students to work on the house. “We went in and got that house done,” says Whitman. “The homeowner was very appreciative.”

“They showed up and accomplished in one morning what would have taken us two days to get done,” says Brumley. “It was a joy to see their youth. They were willing to learn, and they were very encouraging. I never heard any of them complain, even carrying five-gallon buckets of mud out of basements…it was a great encouragement for those of us who have been doing this for a while.”

Of the nine students serving, more than half of them were freshmen that had been on campus for barely a month. “It’s an encouragement to me to see these students willing to come out and serve the community,” says Whitman.

Victoria Bertram, a freshman, found the experience to be eye opening. “Helping with Disaster Relief was a meaningful use of time to realize the gravity of need that is all around us,” she says.

That reality check is one reason Brumley hopes to see more college students get involved with Disaster Relief efforts through the MBC. “It helps them see there’s a side of life where people are in crisis and absolutely unable to know what to do next,” he says. “Sometimes when you don’t see the worst-case scenarios, you don’t see how God is working in even the worst of circumstances. I think it’s helpful for them to see outside of textbooks that people are struggling and hurting, yet God steps in and does great things.”

Serving together is often an excellent platform for real-life discipleship. While pulling up flooring together, Whitman talked with a student who had been questioning his faith. “It was encouraging for me and helpful for him,” Whitman says. Since that day, they’ve been meeting to go through Scripture together, “seeing what the Bible has to say about his questions, rather than basing it on what he grew up hearing.”

Whitman hopes that helping with the flood relief is just the beginning. He is in the process of planning a trip to Louisiana to help with Hurricane Laura relief during Mo. Western’s two-month-long winter break. Campus Missionaries from other campuses are already considering sending students from their ministries as well. Aaron Werner, Campus Missionary at Crowder College, is in charge of the Disaster Relief unit for his association, which was recently transformed from a feeding unit into a mud unit. He’s hoping to rally students from his ministry to begin assisting in Disaster Relief efforts as opportunities arise.