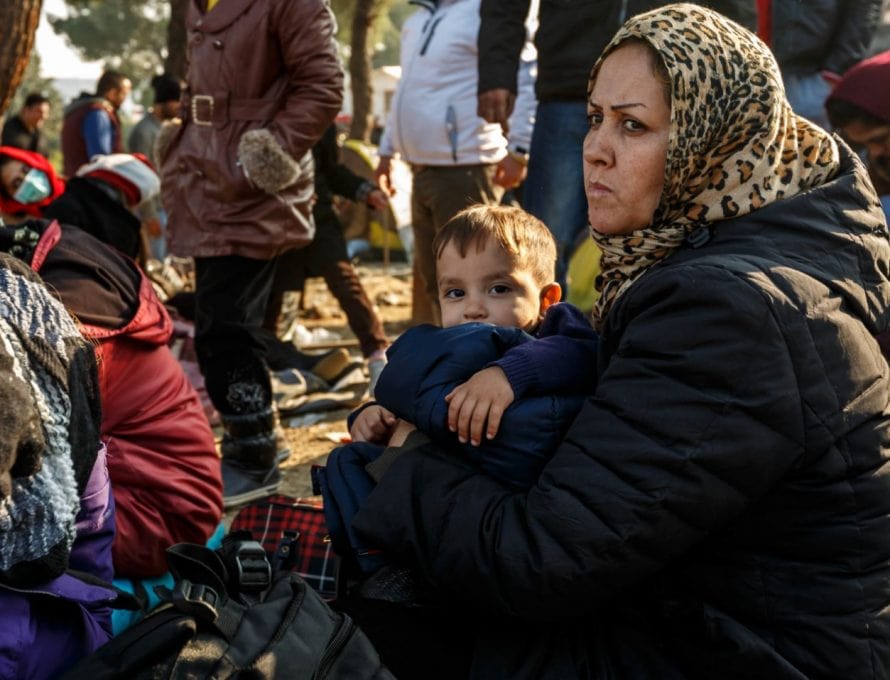 A refugee mother in Greece keeps her son close while waiting for aid.

LESBOS, Greece – In early September, fires destroyed Moria, the largest migrant camp in Greece on the island of Lesbos. Thirteen thousand refugees were without shelter.

Kashef* is an Afghani Christian who lives on Lesbos in order to minister among the refugee communities. Kashef landed on the island in a boat as an asylum seeker, so he can empathize with the communities in the camps.

With the camp on fire, refugees were forced to take shelter on the streets. Kashef told IMB worker Derrick Pennon* that it had become increasingly difficult to access the camps due to restrictions. With refugees forced to the streets, Kashef and other Christians were able to share the gospel widely and more easily.

Kashef and 20 Christian leaders he has discipled partnered with another organization to pack and deliver bags of food to the displaced. While many of the refugees have now been relocated to other tents, there are still many opportunities to share the gospel.

By Pennon’s estimates, 100 Christians who are being discipled and multiple church gatherings are taking place on the island. In September alone, Kashef reported the gospel was shared 1,000 times. Christian leaders Kashef discipled are now in other parts of Greece and have shared the gospel and planted churches.

In 2015, at the height of the refugee crisis, refugees were also forced to live on the streets. Kashef said this was also a great opportunity to share the gospel.

Pray for Kashef as he shares the gospel with refugees in Lesbos. Pray for IMB workers and national believers dedicated to ministries among refugees, migrants and displaced people.