VERSAILLES – Chris Bass believes strongly in men being the spiritual leaders of their families. He has based his ministry on that premise. The pastor of First Baptist Church, Versailles, and a member of the Missouri Baptist Apologetics Network, Bass specializes in writing and teaching  about family life.

He believes men should be the spiritual leaders in their homes and that they should lead their families to worship together in church and in the home.

When he was a youth pastor at First Baptist Church, Clinton, Bass had sent out a survey to the parents of the teens in his youth group. Previously, he had sent home follow up questions from the Bible studies for the families to discuss, but wasn’t sure if they were being used. He asked parents if they spent any time doing family devotions. The results were that the vast majority spent little or no time each week in family devotions. 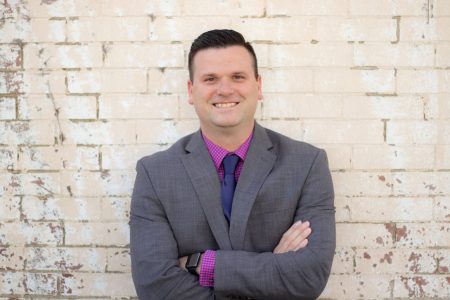 So Bass realized he was providing spiritual information, but it was not really getting applied at home. The home seemed to be the missing link. Fathers were in need of tools and encouragement to lead their families at home.

Bass used this process as a basis for his Doctor of Ministry project at Midwestern Baptist Theological Seminary.

Bass said, “I talked to these parents about how they expected their kids to become discipled. I realized that just giving the kids information was not working. Everything in our world is specialized, baseball coaching, music, etc.  So parents kind of feel like you go to a church that will hire a youth pastor and they will get it there.

“But as I have read through the Bible and studied church history, I see that it has to be the parents as spiritual teachers.”

Later, as Bass became pastor of FBC Versailles in 2017, he continued his emphasis of one-to-one discipleship. He now meets with four men per week, encouraging them in their ministry to their families.

“The best apologist is the one who knows the basics of the faith—kind of street level  basic. People ask, ‘Ok, if there is a God, what does He want from me?’”

Bass continued, “In Versailles, we don’t have a high percentage of Muslims or Mormons, but we do have people asking ‘How do we live our lives for God?’”

He said in the two churches he has served, he has observed good results. The time families spend in prayer together has increased. The families intentionally carve out some time every day for discipleship.

“Some people look like their lives are all together,” Bass said. “But in reality they are a mess.”

So, he believes you take people where they are and move them toward God. “Family worship time should not look like a Sunday school lesson,” Bass said. He suggested that parents spend a short amount of time each day with their kids reading the Word, asking questions and answering if they can—getting back to the kids later if they don’t know the answer.

“The daily drip of God’s Word makes an impact over time,” Bass advises. “Keep giving them the Word.”

He has been influenced by author and seminary professor Don Whitney, who advises parents invest heavily in family devotions and spiritual nurture of their children.  Whitney wrote the book “Family Worship: In The Bible, In History, And In Your Home” (Crossway, 2016).

Bass is a native of Warrenton, the son of a deacon and a choir director. “I was in church a lot,” he said. “They did not have a lot going on for youth when I was a teenager, so I went to the adult discipleship classes. I guess that is where I soaked it up.”

He went on to graduate from Southwest Baptist University with a Bachelor of Arts degree and then Midwestern Seminary with two masters degrees and a doctor of ministry degree. He has specialized in the concepts of disciple-making and family ministry.

As a part of the MBC Apologetics Network, Bass is available to teach seminars and lead Bible conferences. He also is a free-lance writer, having contributed three articles for the LifeWay Christian Resources publication, “Biblical Illustrator.” His topics there were on the family life and customs of Bible characters: Timothy, Job and Jesus.

He said, “I love to learn. If anyone has a need for some teaching—even if it is not my specialization, I would love to dig in, do the research and come teach at your church.”

Chris Bass and his wife, Ashley, are modeling what he believes and teaches in Versailles.  To reach him for information about teaching a conference in a church, he may be contacted at: (660) 890-5888 or pastor@fbcversailles.com.  He writes a blog at pastorchrisbass.wordpress.com.

The MBC Apologetics network can be accessed at: mobaptist.org/apologetics.