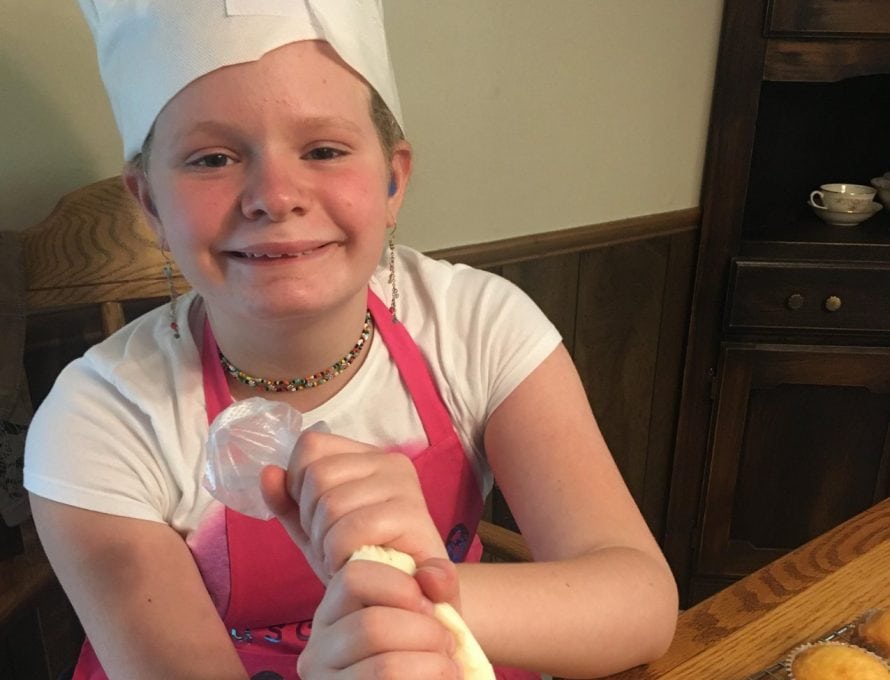 LEBANON – Rylee Slye, 10, decorates cupcakes before selling them to raise funds for reaching deaf people groups around the globe. (Photo courtesy of the Slye family)

LEBANON – Rylee Slye is a 10-year-old girl on a mission to share the gospel with 70 million people.

Each month Hillcrest Baptist Church here spotlights a lost people group. The spotlight usually consists of an informational video followed by a time of explanation, prayer, and passing out a prayer guide. In recent months, the church highlighted the deaf affinity group. According to the IMB, the deaf affinity group encompasses 70 million people worldwide.

This mission moment caught the attention of Erin and Justin Slye. Their daughter, Rylee, was born with moderate to profound hearing loss and has required hearing aids since she was four months old. Moved by what they learned, the couple began to talk and pray together at home about how God might use them.

“We were made aware of the deaf people group and didn’t even know it was a need,” Erin said. “We were convicted and began to pray about how God might want us to respond.”

They were surprised when Rylee, now 10 years old, told them she wanted to help.

“Rylee probably heard through us praying about it and talking about it,” Erin explained. “These are kind of her people.”

Rylee loves to bake, and she came up with the idea of selling baked goods to raise money. Half of the proceeds are going straight to the IMB, and the other half is going into a savings account so one day Rylee can open her own restaurant.

Rylee worked on homemade signs to post around town, and her parents shared her mission on Facebook. With COVID-19 raging, it wasn’t clear whether or not she would receive much response. But soon, orders started pouring into the Sweetie Pie Bakery, the name Rylee chose for her operation.

Rylee, whose favorite item to bake is cupcakes of all kinds, kept the oven hot and the orders moving. Her incredibly proud mom and dad have supported Rylee every step of the way, from seeing their kitchen filled with orders to helping deliver the delicious final products. Her dad even helped Rylee make labels with a theme verse, Colossian 3:14. Rylee has received orders and donations from as far away as South Carolina. So far, she has raised over $700 in her efforts to reach the deaf for Jesus.

“I just wanted to help others know about Jesus.”

“We never want to put a limit on God, and we know He’s working in her,” Erin said. “We are just going to step out of the way. God has totally blown out any expectation that she had.”

Their pastor, David Brown, said that Rylee’s commitment has inspired the entire congregation.

“Rylee has two wonderful qualities that make her a very special girl.  She is a very tender-hearted and very determined young lady.  Her love for the Lord and desire to help people know Jesus is truly an inspiration to all of us at Hillcrest,” Brown said.

When asked if there was one thing she wants people who buy from her bakery to know, Rylee said, “I want them to know Jesus loves them.”

Rylee may have to slow down on orders now that school is almost back in session, but she intends to keep baking as much as she can. Because Rylee heard and obeyed the call, many more will know the name of Jesus.

If you would like to place an order or make a donation to the Sweetie Pie Bakery, you can contact Rylee through her church, Hillcrest Baptist Church in Lebanon, at  info@lebanonhbc.com.