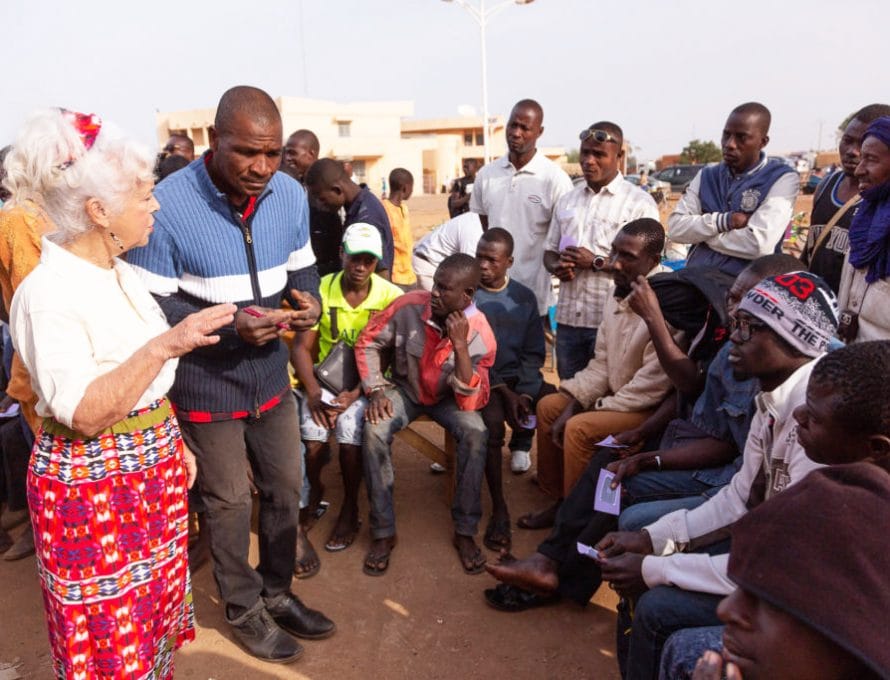 Volunteer Jean Davis shares her testimony through translator Julius Okunade with truckers while they wait to be seen at a free medical clinic hosted by IMB missionary Katee Sheppard* in Burkina Faso for the West Africa trucker ministry. IMB photo

WEST AFRICA (BP) – In West Africa, truck driving is a dangerous and stressful job. Drivers face job insecurity, the threat of being robbed, extortion from corrupt policemen, and cultural and linguistic barriers as they cross borders taking imports from the coast to landlocked countries farther east.

So when Christians offered to pray for Ahmed* one day as he prepared to leave the port and transport his next load, he didn’t mind, even though he was Muslim. As he continued on his route, he was amazed that the police never harassed him, just as the Christians had prayed.

When he saw the believers at the port again a few months later, he gathered a group of his friends and went over to talk with them. The last time, the Christians had asked if he’d listen to a story, but he’d been in a hurry to leave. Now, he wanted to know more.

“God answered their prayer,” he told the whole group. “Now, we’re going to listen to their story.”

Each time Ahmed returned to the port, he found the believers and asked to hear another story. As the months passed, he understood his sin and his need for a Savior, and he put his faith in Christ.

He’s just one of many truck drivers in the last decade who have heard and believed the Gospel through a ministry to truckers IMB missionary Katee Sheppard* helped start.

When Sheppard moved to Togo in 1998, her job as a logistics coordinator kept her crisscrossing all over West Africa helping other missionaries with practical needs.

As she traveled throughout the region, she began to notice the drivers, and she realized they were spreading more than just imports. Historically, Islam spread in Africa from Muslim people groups in the east to other people groups in the west through trade routes. As goods were exchanged along the routes, so were cultures.

Today, the trucking routes are modern equivalents of those trade routes. Truck drivers bring their culture with them as they travel, just like the traders did. Sheppard could see evidence of that as she noticed more and more mosques appearing in the cities she knew were truck driving hubs.

The drivers, Sheppard theorized, were a major source of the spread of Islam throughout the region. But she had a vision to change that.

“I thought, why can’t they spread the Gospel instead?” she said.

Over a decade later, that seed of an idea has borne much fruit. Ministry among West African truck drivers has begun in five countries and is still expanding. A network of 70 local believers has formed to support it. New believers have been baptized and churches planted in a few ports and capital cities that are trucking hubs.

Sheppard said she’s been amazed at the responsiveness of the drivers.

“I don’t think I’ve ever had someone refuse to share a story,” she said. “They’re waiting for someone to come and share with them. It’s an amazing thing.”

Leah Givens*, another IMB missionary who helps with the trucker ministry, said drivers are often just glad someone is taking the time to come talk to them.

“I’m amazed at how hungry they are to hear the Word,” Givens said. “It really is a ripe field.”

Because truckers are transient, discipling those who convert can be challenging. They also might face stiff persecution in their home countries. Over the years, though, a network of national believers has developed to support the ministry.